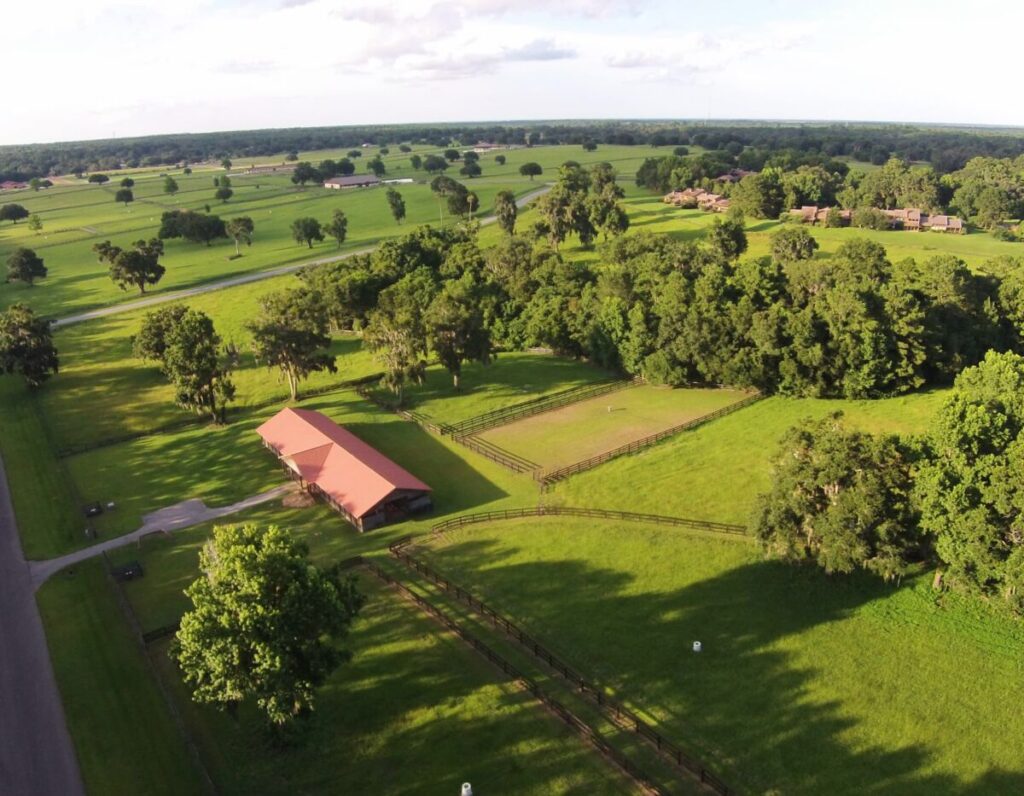 Marion County Commissioners will soon cast pivotal votes that could impact the County’s Farmland Preservation Area (FPA) and its designation as a protected rural region for years to come.

During the County Commission Meeting Tuesday (June 21), Commissioners are slated to have a final hearing and vote on two amendments to its Comprehensive Plan, which if passed, will then allow them to vote on a Planned Unit Development (PUD) application from the owner of WEC Jockey Club, Golden Ocala Equestrian, LLC.

The 1,000-plus acre property, the former Ocala Jockey Club, is located within the county’s Farmland Preservation Area (FPA) and outside its Urban Growth Boundary (UGB). It was purchased in August for $10.5 million.

The land is located on rural-two lane West County Road 318, about a mile west of I-75 in the community of Irvine in unincorporated northwest Marion County.

If the PUD application is approved, Golden Ocala, owned by billionaires Mary and Larry Roberts, who also own the World Equestrian Center in Ocala and the long-distance trucking company, R&L Carriers, among others, plans to construct a 200-room hotel, 100-site RV park, 94 homes, polo fields, a 9,000-seat stadium, retail space and a fuel station on the property.

“They are going to ruin one of the most beautiful horse farms that you’ll ever see,” said Jerome Feaster, founder of the non-profit group, Save Our Rural Land (SORA) which has vehemently opposed the proposed development.

In a 4 to 1 vote March 1, Commissioners approved sending the proposed amendments to the state agencies for review and comment, despite objections from nearby citizens and members of the Ocala Horse Alliance and SORA, which raised concerns about traffic, harm to the environment, and wastewater, as well as the land’s location in the FPA.

County staff was against the developer’s application, but the Planning and Zoning Commission, before the March commission meeting, narrowly recommended approval to the County Commission by a 3-2 vote.

“The biggest concern…is going to be traffic and making sure that we phased the development correctly, and don’t let it get ahead of the traffic improvements that need to be done. If we do that well, I think it’ll be a successful project,” Zalak III said after the meeting.

None of the state reviewing agencies objected to the proposals, setting up Tuesday’s vote.

Several of them, however, noted the presence of cultural and historical resources, and attempts to locate Fort Drane, a Second Seminole Indian War fort on the property. The agencies also wrote the site has federally or state-protected or threatened species, and noted its being within the Rainbow Spring Group and Rainbow River Basin Management Action Plan (BMAP), and the spring shed boundaries of the Group.

The massive potential development has rankled environmental and land conservation groups, along with historic and farm preservationists, and neighbors who say it will destroy the rural character of the area and pave the way for even more devasting development if it is allowed.

“There’s a lot of people that are concerned about it; absolutely no doubt,” he said. “They don’t think the road can handle it, they don’t like the housing capacity they want to put out there and the arena is too big, it’s over the top.”

At least one farmland preservation group, Horse Farms Forever (HFF), has come out in support of the WEC developer project. In a previously published letter, the group said they traded their green light for the jockey club project in exchange for lower density development at other farms owned by the WEC developer, the “256-acre Crupi parcel (the farm with the castle entrance) and the farm directly across on US 27, the 247-acre Plumley parcel, with A-1 zoning and to develop these properties into farms of 10-acres or larger.”

As previously reported, the HFF group made this agreement with the WEC developer without consulting with the farms that surround Ocala Jockey Club.

The County Commission Meeting begins at 9 a.m. Tuesday at the McPherson Governmental Campus Auditorium, 6o1 SE 25th Ave., Ocala. The agenda is long, with the discussion and vote on the comprehensive plan amendments and the PUD application for WEC Jockey Club scheduled to take place last.