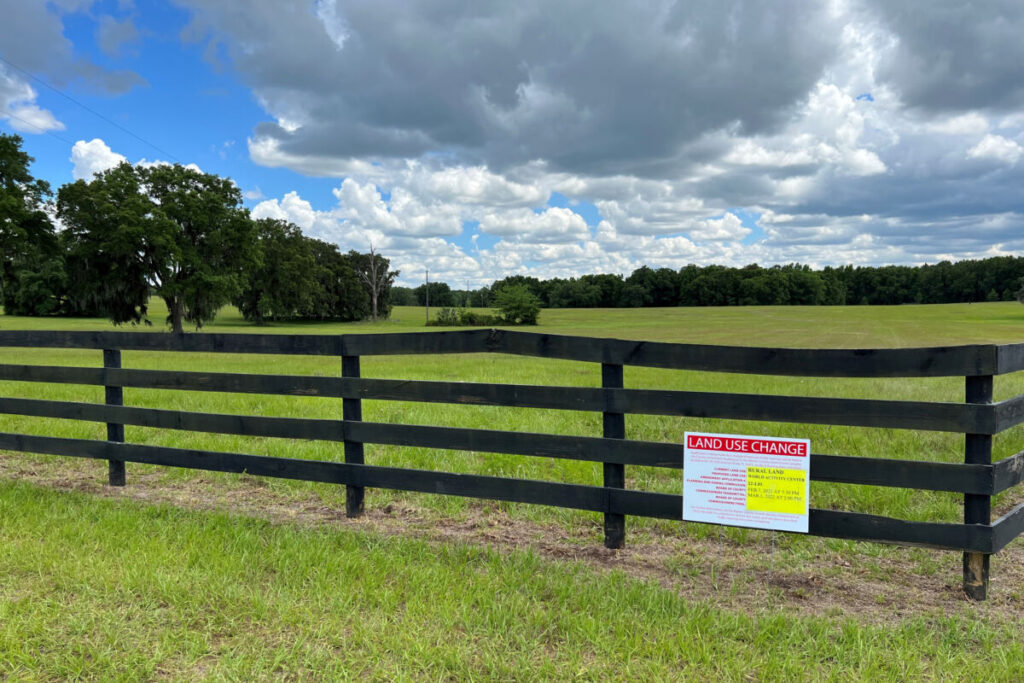 Editor’s Note: This article has been updated to include clarification from the county on urban growth inside and outside the urban growth boundary.

The Marion County Board of County Commissioners on June 21 will consider amending Marion County’s Comprehensive Land Plan to allow urban growth in a rural area approximately ten miles north of its urban growth boundary (UGB) in the Farmland Preservation Area, paving the way for the World Equestrian Center developers to move forward with plans to redevelop the former Ocala Jockey Club.

It has been suggested that the 4,000,00 square foot industrial space down the road at Highway 318 and I-75 called Sunny Oaks that was approved recently will provide waste water services to the new jockey club development. Sunny Oaks industrial park is also outside the UGB and in the Farmland Preservation area.

The WEC land-use designation “identifies potential development options and maximum development amounts…whether or not a World Equestrian Center site [is] located in an urban or rural area,” according to Chris Rison, a senior planner with Marion County.

The proposed actions are sparking community concerns because the property is undeniably rural and outside the Urban Growth Boundary. Critics ask how does approving this request from the developer, and the massive project that comes with it, square with the county’s long-term plans to fight urban sprawl and preserve farmland as outlined in county’s comprehensive plan?

Among those raising concerns are local residents Gary and Judy Greenberg. Gary, who holds a master’s degree in Urban and Regional Planning from the University of Florida, helped craft the policy language in 2005 that established the county’s Farmland Preservation Area. He also helped perform the mapping analysis that led to the initial boundaries for the Farmland Preservation Area.

His efforts were in concert with the Marion County Citizens Coalition, a nonprofit organization that formed specifically to monitor growth in Marion County and to present planning options to the county commissioners.

Judy has a background in a broad spectrum of land-use issues: physical attributes including water, soil and air, and economics including transportation, jobs, and rural infrastructure. She has volunteered with the The Public Policy Institute of Marion County at the College of Central Florida and participated in numerous studies about growth consequences and traffic.

The Greenbergs recently sent a letter to the county commissioners raising objections about the proposed development. The following is an interview the Gazette conducted with the couple elaborating on their concerns.

Gazette: In 2005, Marion County made efforts to protect farmland by establishing a Farmland Preservation Area. What was happening locally around that time to encourage such measures and what role did you play in that preservation initiative?

Judy: In 2002, Walmart approached the commission about locating a distribution center on Irish Acres Farm in north Marion County along the U.S. 441 corridor. Citizens sent a clear and poignant message to Walmart executives and to the commission opposing the distribution center on that site. Piecemeal development requests along the U.S. 27 corridor and other rural areas gave cause for the citizens to formulate a plan for protecting the last remaining large expanses of rural lands in Marion County. Heightened concern about the health and future of Silver Springs and Rainbow Springs by the state of Florida and Marion County played heavily on the minds and hearts of the citizens. The Farmland Preservation boundaries were determined to encompass major natural land filtration attributes that impact both of these first-magnitude springs.  Development had been allowed unchecked in other areas of the county that were equally important to water quality; however, once paved it is lost forever.

A big part of the initial farmland preservation efforts was aimed at protecting the function it serves as a vast network of depressions that are filled with water just waiting to perform a natural function for the springs.

My role in the preservation initiative has been to participate as a volunteer Citizen Planner providing data analysis to support good land-use decision-making by the commissioners and by providing workshops to educate the public and government about the Farmland Preservation Area and Transfer of Development Rights Program. One of the first transfer of development rights by the program resulted in the preservation of the north 100 acres of the Orange Lake Overlook just south of the town of McIntosh.

Gary: In simple terms, Urban Growth Boundaries are exactly what they sound like—they are the spatial boundaries within which urban growth is deemed appropriate and desirable. UGBs are areas targeted (planned) for growth and development as well as areas specifically appropriate for more dense infill (higher density development) as opposed to suburban and rural areas. Moreover, they are appropriate “receiving areas” with respect to the county’s Transfer of Development Rights program.

Part 2 of chapter 163, Florida Statutes, refers to appropriate planning when maintaining urban, rural, conservation, and other facilities. Placing an urban-style development such as WEC within the FPA is completely inappropriate to those who call the FPA home.

Gazette: The county created a special land-use designation for the WEC developers to build the World Equestrian Center even though it encroached into the Farmland Preservation Area. Now, the developers are asking to develop the former Ocala Jockey Club using that same special WEC land-use designation. What are your thoughts?

The WEC land-use designation conflicts with what was originally intended for rural land use since it allows for commercial purposes such as hotels and retail space. Rural land, addressed in policy 2.1.16 of Marion County’s land-use plan, only allowed cluster development under a planned unit development process with a maximum density of one dwelling unit per seven gross acres and a required minimum of 60% open space set aside.

Additionally, under policy 3.3.3., the standard for amending the Farmland Preservation Area requires a new Urban Growth Boundary, which would have all sorts of implications for development in that rural area of the county that has remained outside the boundary.

Judy:  Anyone who has been to WEC off 80th Avenue has seen what a beautiful commercial venture they’ve created. It’s stunning, sumptuous, and vibrant. It’s also 100% incompatible as a development within the Marion County Farmland Preservation Area.

Perhaps this special WEC land-use designation made sense for the original area designated for this fabulous World Equestrian Center because the urban and rural lands had already begun to intertwine … because of a growth scenario that was in the making for decades.

However, our “Horse Capital of the World” is a multifaceted jewel. The Farmland Preservation Area is a totally different facet worthy of a separate and distinct land-use definition, not to be confused with or by the special WEC land-use designation.

Gazette: What is your advice to the county commissioners as they contemplate their decision?

Gary: In an ideal world, decisions by the commission regarding major changes to future land use should be buffered from erratic, day-to-day political maneuvering, and must focus on our long-term goals and objectives. Much like deliberations by the U.S. Supreme Court attempting to uphold the U.S. Constitution amidst the backdrop of undue social pressure, the county commission must uphold the comprehensive plan.

The commissioners will need to weigh the interests of the developer’s request against our future and the public good.

Judy: I’m not going to mince words here. It may be within the commissioner’s legal rights to allow this incompatibility to proceed unchallenged and to adopt it as submitted. But to do so would be a complete abrogation of their responsibilities as the stewards of our county. I hope the board denies this request and sends it back to the developer to be revised in a manner fitting with the land, the vernacular, and the desires of those who live in this immediate area of the proposed development.

Gazette: There seemed to be disagreement between the county’s growth management department and the planning and zoning commission regarding the developer’s application. Can you attribute that disagreement to anything in particular?

Gary: Yes, the county’s growth service staff recommended denial since the new proposal creates a huge commercial operation inside the Farmland Preservation Area. As to the Planning and Zoning Commission recommending approval, we both discount that approval since the commission did not have all the proposed policy text during its consideration.

Gazette: What is your personal motivation for speaking up on this matter now? Would your home be impacted by this proposed development?

Gary: Every person who has chosen a rural lifestyle is negatively impacted by development such as this. It completely changes the landscape and once built, will never be returned to open space.

When we bought our property, we specifically paid attention to the zoning rights and restrictions for the region (agriculture, one unit per 10 acres, etc). We, along with many others, have worked hard to see this maintained and preserved.

We have witnessed people move into the rural community from other, more-developed locations and then go to county commission meetings complaining about the smell of cow manure or the noise of tractors starting by daybreak. It’s problematic for the working farmers and the benefits they produce for us all.

The line between rural and urban/suburban is crucial to Marion County’s future—it must be preserved and protected.