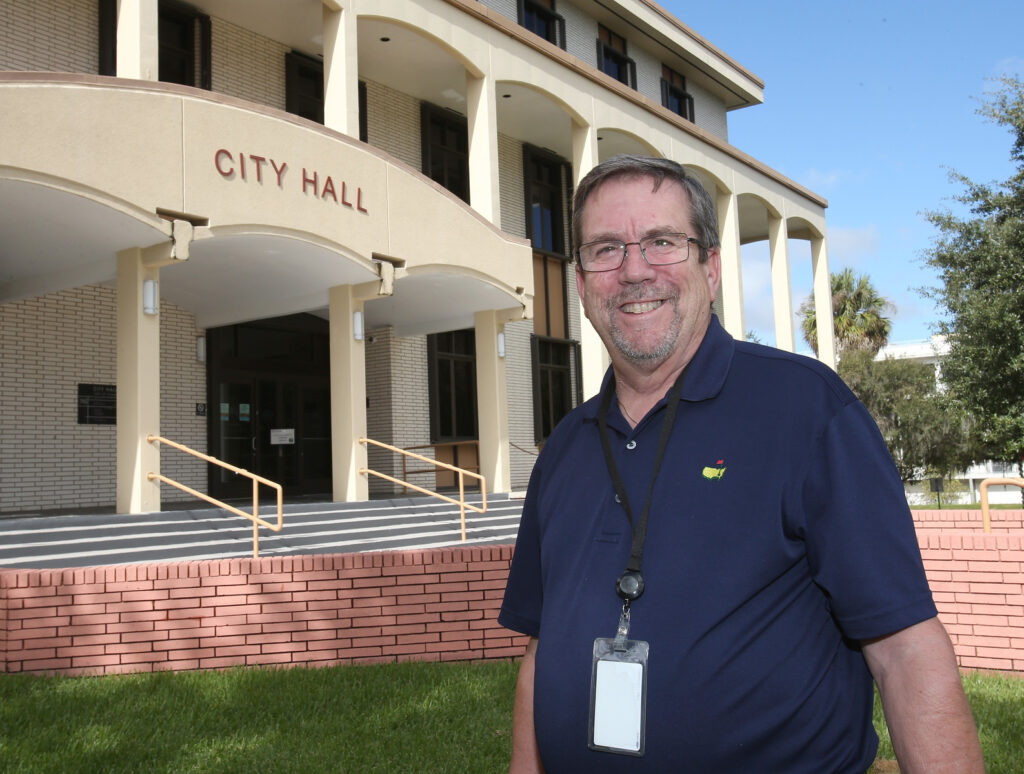 Jay Musleh, the president of the Ocala City Council, poses for a photo at Ocala City Hall in Ocala, Fla. on Tuesday, Nov. 10, 2020. [Bruce Ackerman/Ocala Gazette] 2020.

Unfinished business is the driving force behind Jay Musleh’s decision to seek re-election for the Ocala City Council’s District 3 seat.

Musleh, who took office in 2012 after being elected to fill an unexpired term, filed to run for his third full term on March 26.

“When I decided I was going to run again, I knew that Justin (Grabelle) was probably not going to run and he’s since confirmed that. And then I was surprised when Matt’s (Wardell) gave his resignation effective in August, so I think I can provide some leadership to the council during that transitionary period,” Musleh said.

Prior to taking office in May of 2012, Musleh served for 16 years on the Ocala Code Enforcement board, including several years as chairman. Familiar with the innerworkings of the city government, Musleh decided to run for office to take on some of the city’s largest projects.

According to Musleh, when he took office, the city was dealing with the “sandbox,” which was the derisive nickname given to the area where the city’s parking garage eventually went up.

Before the parking garage was erected, the site was under the control of Jorge Gutman, a Miami-based developer, who failed to develop several retail shops, as promised in a deal with the city. The city eventually got control of the property in 2009 after Gutman faced foreclosure.

The property sat undeveloped for years before the city began constructing the $5.3 million parking garage project in 2017.

Musleh also had a hand in improving the city’s finances, something his 38 years of banking experience helped facilitate.

“We were able to accomplish a revision to our general employees’ pension fund, which, given time, will put it on a lot more sound footing,” Musleh said.

But the incumbent district three councilman will tell you that the projects he has the most pride in are the ones that are seldom mentioned.

“I get to think back to what are some of the bigger accomplishments we’ve made and one of the biggest ones we don’t talk about that much is the Wetland Recharge Park,” Musleh said. “We turned an underutilized golf disc course into a recharge park area that’s treating stormwater and millions of gallons a day and providing a world-class bird sanctuary at the same time, along with boardwalks and walking trails. Something like that is just tremendous.”

The Wetland Recharge Park, in addition to the completion of the parking garage and downtown Hilton hotel are a few of the many projects Musleh is able to boast about.

But there are other projects he hopes to see through if re-elected, including the construction of the Mary Sue Rich Center at Reed Place and the development of the former Pine Oaks golf course into a residential community.

But more importantly, Musleh hopes he can provide guidance to the council as it continues to navigate tough issues like the fire fee lawsuit.

In 2006, the city added a monthly fee to city residents’ electric utility bill to pay for fire services. However, in June of 2020, the 5th District Court of Appeals deemed the city’s means of collection unconstitutional, leaving the city on the hook for upwards of $81 million in refunds. The court is  sorting out the refund issue.

“We’re going to have some new faces up there and these are still trying times,” Musleh said. “I’d like to see the conclusion of the fire user fee lawsuit being the main thing, and also give (city manager) Sandra Wilson continued support as she continues to grow in her job.”

Musleh’s will face Ty Schlichter in the Sept. 21 city election. Schlichter, who is running for public office for the first time, filed to challenge Musleh on April 28.