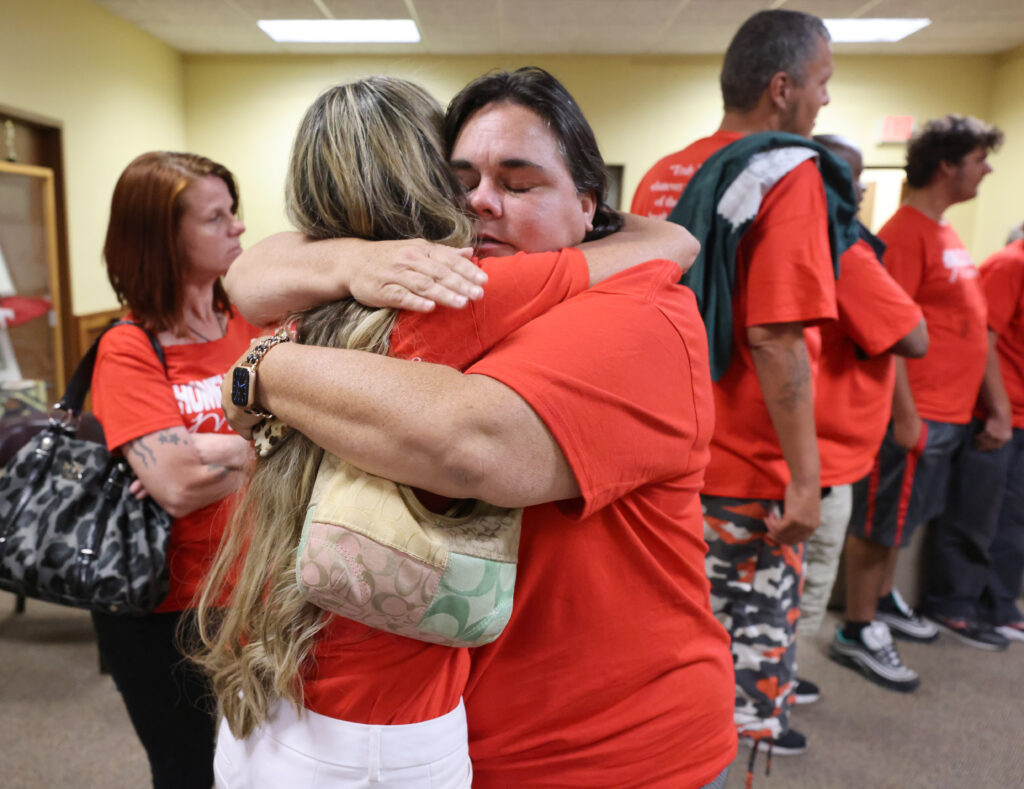 Michelle Collier, the case manager at Interfaith Emergency Services homeless shelter, gets a hug from Dawn Lovell, the mental health counselor for Interfaith, after the Ocala City Council on Tuesday denied a proposed ordinance that would have allowed an open-air, emergency homeless shelter. [Bruce Ackerman/Ocala Gazette]

When asked to state their name and address for the record, some could only give their name. They had no address.

Others gave Interfaith Emergency Services as their residence. The facility was the closest thing some had to a home.

Those attending Tuesday’s meeting spilled out to the council chamber’s anteroom as the council considered an ordinance that could have allowed Interfaith to operate an emergency, open-air shelter at its facility at 435 NW 2nd St.

In the end, however, the council voted 3-2 against the ordinance. Councilmen Ire Bethea, Justin Grabelle and Matt Wardell voted against the measure. Councilmen Brent Malever and Jay Musleh voted in favor.

Recently, Karla Grimsley, CEO of Interfaith, set up a temporary open-air shelter where 15 to 20 homeless people could sleep safely. It was behind a fence, protected by armed security and offered access to services and facilities.

She set up the temporary shelter after the homeless started congregating outside the facility.

“As the homeless camps were closed back in January of this year, starting in February, we literally had a Skid Row start on Second (Street),” Grimsley said. “It started with one gentleman by the name of Mike, that I call ‘Big Mike,’ who is a severe schizophrenic. And as harmless as he is, he had nowhere to go and started camping on our sidewalk.”

But as more and more people began congregating, nearby residents and businesses balked.

That’s when Grimsley set up the open-air shelter and had authorities remove those camped out on the street who did not want help from Interfaith. However, Grimsley’s idea ran afoul of city zoning rules, prompting Tuesday’s consideration of giving the temporary shelter a path to legal status.

When Musleh asked if the council could rescind the ordinance and related permitting at any time, Tye Chighizola, the city’s growth management director, responded it could.

But several residents from the neighborhood near Interfaith expressed their opposition. 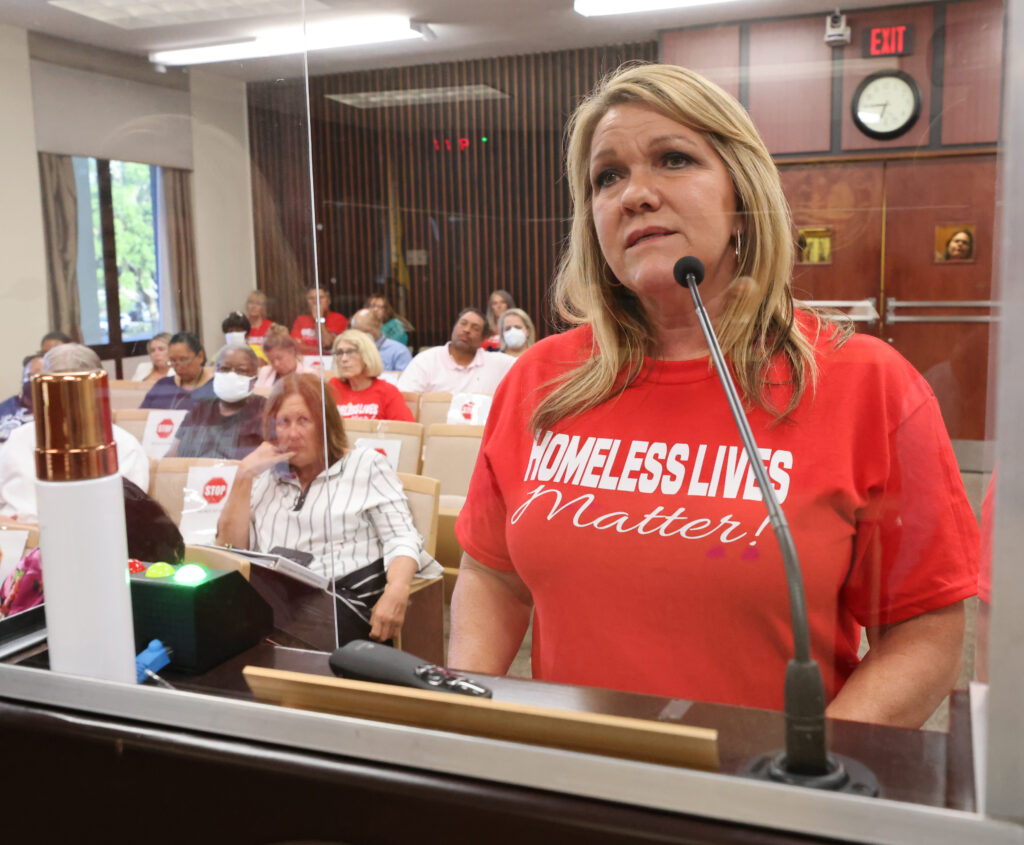 Karla Grimsley, the CEO of Interfaith Emergency Services, speaks to the Ocala City Council about a proposed ordinance that would have allowed an open-air emergency shelter for homeless people at Interfaith. [Bruce Ackerman/Ocala Gazette]

“We are working tirelessly… tirelessly to revitalize that area,” said Barbara Brooks. “And so I say to you… any business, any organization that comes in our neighborhood, if they’re not elevating it, if they’re not inspiring our community, our neighbors, our residents, then we shouldn’t have them there.”

Brooks said she would prefer the city find a permanent solution.

“We’re just kicking the can down the road,” she said. “We need a permanent solution… You cannot come into our community, as you’ve done before and simply ignore us. We will not be silent. And I don’t care what you say or do, we’re going to speak, and we’re going to shout it down. And we’re going to say no.”

Other residents worried the shelter would draw more homeless people to the area. Some worried about safety and increased crime.

But for the homeless who showed up at the meeting, their concerns were more immediate.

“Where do I sleep tomorrow night?” several asked the council.

Interfaith representatives pleaded for the opportunity to offer temporary relief.

“We didn’t create this problem,” said Kent Adams, who serves on Interfaith’s board of directors. “But we offer a very good temporary solution. And that’s what we’re looking for… If you close us down tonight, you’ve got an instant problem on your hands.”

Mayor Kent Guinn, who does not vote on items before the council, but who can participate in discussions, said he was against the temporary shelter idea. Guinn does have veto power, which would require a 4-1 supermajority council vote to overturn.

Grimsley said many of the images shown pre-date the open-air shelter and didn’t accurately represent the current situation.

“Yeah, I don’t want you to approve this,” Guinn replied.