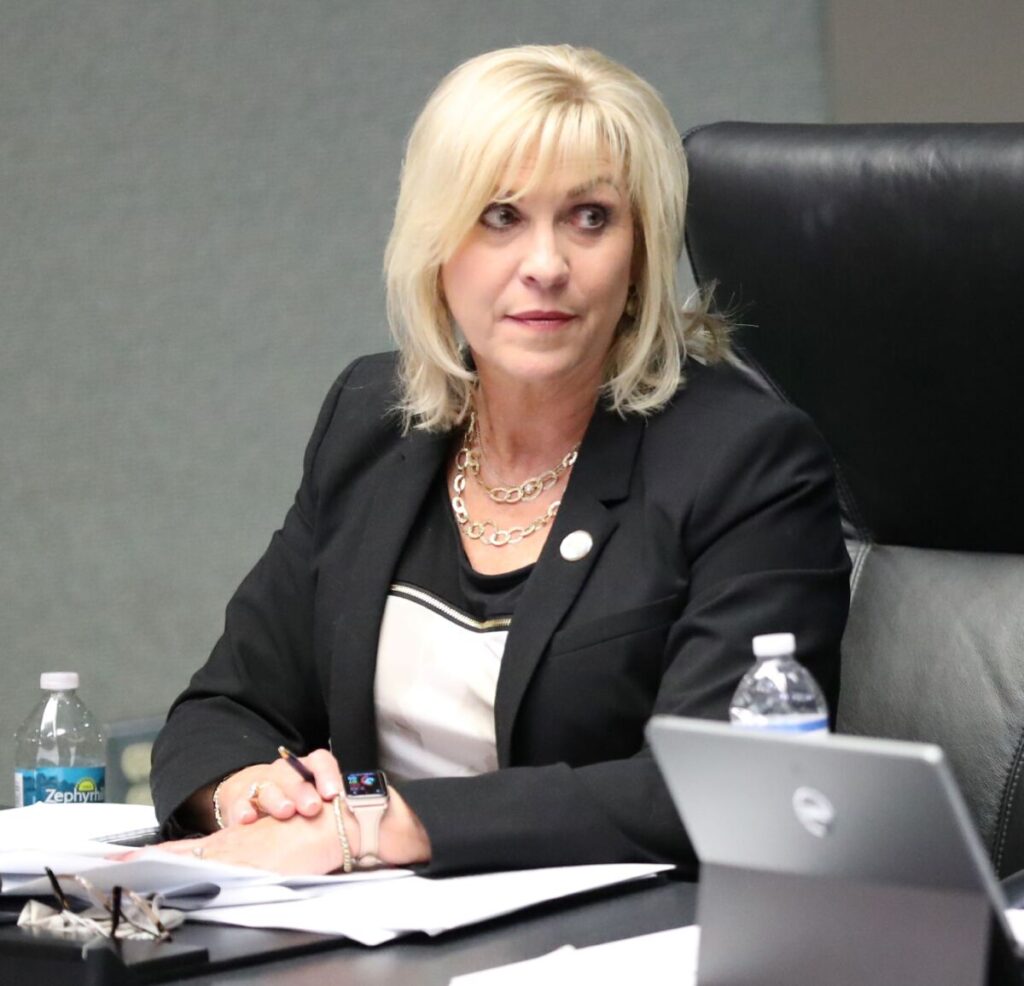 During the Aug. 16 Marion County Board of County Commission meeting, Commissioner Michelle Stone signaled to her fellow board members that she would soon be presenting a draft copy of a new interlocal agreement between Marion County, several of the municipalities and the school district.

Stone offered the information in response to several objections brought by a lawyer representing the On Top of the World and Calesa Townships communities as the commission was considering whether to approve plans for an adjacent development that would add more than 500 houses to already crowded southwest Marion County on 132.26 acres at SW 80th Avenue and SW 63rd Street Road.

While county staff had recommended the board approve the request by Ocala SW 80th Avenue LLC to change the land-use designations for the area to allow for more intensive growth, the lawyer from the Tallahassee firm Stearns Weaver Miller Weissler Alhadeff & Stitterson and the firm’s in-house certified land planners provided significant details at the board meeting to support their objections.

The certified land planners also wrote several long memos to the commission leading up to the meeting detailing the reasons why the project should be scuttled. At the top of the list of “Major Problems with Requested Comprehensive Plan Amendment” was “Failing Schools” due to overcapacity.

Using school district figures, the developer’s lawyer told the commissioners the entire southwest area is at 103% capacity based on school zoning boundaries. The three schools that would serve this project, [Saddlewood Elementary] is at 106%, Liberty Middle is at 111% and West Port High is at 112%. … And the key is (expansions) are not funded.

The OTOW and Calesa opposition memos encouraged the commission and the Marion County School Board to come up with a “short-term and long-term strategy to reduce the over-capacity condition (at the affected elementary, middle and high schools) before approving developments with increased density.”

In the letter, Colen said he did not “object to residential use at the location, but objected to piecemeal, poorly coordinated amendments that seek to increase density without addressing basic community needs.”

Stone asked that the development be put on hold so that more information could be gathered, including answers from the school district on what they need to address the capacity issue.

After the hearing, the Gazette requested the latest draft interlocal agreement to follow up on previous news reports about over-capacity at Marion County schools and recent changes to the statute for school concurrency.

The draft agreement is disappointing because it does not present practical solutions to remedy the current capacity problems or set any levels of service the community should expect the elected officials to consider when approving development or funding for them.

The first thing missing is any mention of Fla. Stat. 163.3180(6)(a) establishing school concurrency among the district, the county and various municipalities. Without establishing school concurrency in the interlocal agreement and the various comprehensive plans of the government bodies approving development, there is no mechanism by which the school district can force local governments or developers to pay their fair share of expenses related to increasing capacity at schools to handle the influx of students these developments envision.

When a level of service is established for school concurrency under Fla. Stat. 163.3180(6)(a) it also makes things fairer for the developers because they can speculate understanding what standard they have to evaluate.

The statutes leave it up to the county and city officials to implement school concurrency based on a community’s particular circumstances; it’s not mandatory. Our growing community’s circumstances absolutely demand it.

The draft agreement instead tries to fulfill the requirements of Fla.Stat. 163.31777 for coordination of information about development between the school district and local government. But these entities have been sharing this development info for years now; it hasn’t helped fix the school capacity problem.

In fact, we are only two weeks into the school year and the district already has 631 more enrolled students than it projected.

There is an attempt in the draft agreement to consider “significant expansion” circumstances that might come up. However, there is nothing the school district can do, according to this agreement, to force developers or local governments to contribute to the costs of building new schools or expanding them.

The agreement also seems like it’s being used as a housekeeping record since the original 2008 agreement was abandoned by Marion County and Ocala without protest by the school district in 2011, which coincidentally was when development largely came to a crawl due to the recession.

All of the attorneys for the city, county and district agree the 2008 interlocal agreement is still the operating agreement among the parties—but no one is following it. If they actually applied the standards for school capacity in that 2008 agreement to the current conditions, we’d be exploring development moratoriums in southwest Marion County because of school capacity problems.

Also, if we were talking about serious and forward-thinking leadership, we’d be discussing money. The school district does not have funding to immediately increase capacity or new schools to keep pace with all of the development that has been approved. Yet, the statutes restrict how many students the district can put in a classroom.

Who will step up to provide the desperately needed funds?

Even if the school district implements impact fees against new construction it will only be a drop in the bucket for what is needed to remediate.

When the Gazette asked Jeremy Powers, the attorney for the school district, this question, he answered it frankly. “We are all working from the same pot of money, the taxpayers’ money. That is why it’s everyone’s problem, not just the district’s.”

The community needs its leaders to have an open, honest – and long-overdue — conversation about implementing school concurrency and relieving the pressure on overcrowded schools, including the painful talk about money and potential pause to more approvals so that the district has time to remediate.

The average Marion County family can’t afford its own legal representation and certified city planners to research and write memos on their behalf. Thankfully, the developer’s team that is objecting to increased density proposed by the Ocala SW 80th Avenue LLC request has done that for them.

Marion County residents deserve an agreement that establishes a short-term and long-term solution to the costs of the development that has already been approved as well as the plans in the pipeline and being envisioned. Key to all of this is the realization that the taxpayers should not have to shoulder all the costs; it’s well past time for the developers to pay their fair share.