MCBOCC voices desire to get a better handle on SW development woes. 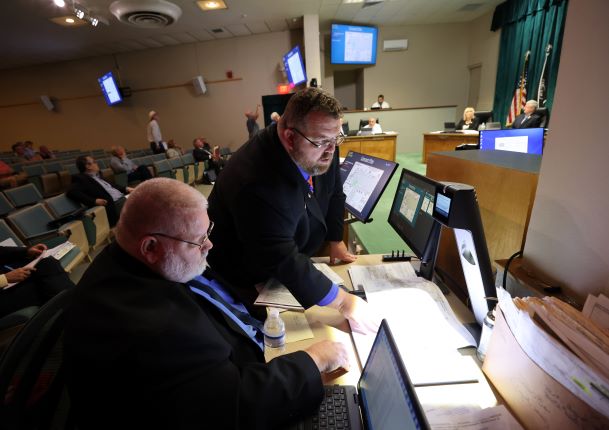 Chris Rison, left, and Ken Weyrauch, right, both of the Growth Services Department, display an item on the overhead projector during the Planning and Zoning and DRC Waiver Requests meeting in the Marion County Commission auditorium at the McPherson Governmental Complex in Ocala, Fla. on Tuesday, August 16, 2022. [Bruce Ackerman/Ocala Gazette] 2022.

The Marion County Board of County Commissioners are pumping the brakes on a proposed development that would add over 500 homes to the crowded southwest portion of the county after an attorney for neighboring developments raised significant concerns about potential impacts on already overburdened schools, roads and emergency services.

The detailed presentation by the planner for the attorneys challenging the project at the board’s Aug. 16 meeting also led the commissioners to decide it’s time for the county to take a broader look at the busy area’s current and future capacity for growth.

The development would be just south of Calesa Township’s 5,000-home development and near the On Top of the World (OTOW) residential community.

According to public records obtained by the Gazette, the attorney representing the OTOW and Calesa developers started raising concerns about the proposed development in mid-May. When those concerns were not addressed, the attorney sent two more letters to the BOCC on Aug. 12 and Aug. 15.

County staff reviewed Ocala SW 80th Avenue’s plans and recommended the board approve the changes requested by the developer.

However, Kenneth Metcalf, director of planning with the Tallahassee law firm of Stearns Weaver Miller, which is representing OTOW and Calesa, went beyond the staff report and detailed for the board numerous impacts the proposed development would bring to the already crowded area.

“We have done an analysis,” Metcalf said, “that addresses the increased density in the study, basically between 80th Avenue and 60th Avenue, north of State Road 200.’’

The firm’s letter states: “Build out of the current Future Land Use designations would result in 4,633 units. Without any further density increases, the build out based on current future land use designations will add nearly 3,000 trips to the roadway network and over 1,000 students, triggering the need for a new elementary school, middle school and high school.

“Changing from LR to MR will significantly impact major roads by doubling peak hour trips to 5,887,’’ the letter states, “and would double student demand to over 2,000 students, triggering the need for several new schools.”

The letter also requested that future Comprehensive Plan applications in that area be denied or delayed “until a study has been completed to analyze and address…existing and future needs for roads, schools and public facilities and services.”

Ocala SW 80th Avenue had submitted a required traffic analysis to the board. But Metcalf told the board the analysis was flawed because the Calesa Township traffic was not included.

“I don’t know how you disregard 5,000 units and don’t include [those] trips,’’ he said. “They are [also] not including all the trips from On Top of the World. So there are serious problems with the traffic study.”

Attorney Jimmy Gooding, representing Ocala SW 80th Avenue, pointed out that other developments have only had to provide a traffic analysis without going to the expense of a more intensive traffic study at this point in the process.

“To change the rules in mid-game isn’t fair,” Gooding said, noting this application has been in the process for six months, and the applicant has complied with every county requirement. “Again, we wish you wouldn’t change the rules. But if you’re going to, then we’ll live with them.”

“The school board did a great job of outlining the capacity problems we have in southwest Marion County,’’ he said. “As you are seeing, the entire southwest area is at 99% capacity. It’s at 103% capacity based on school zoning boundaries. The three schools that would serve this project, [Saddlewood Elementary] is at 106%, Liberty Middle is at 111% and West Port High is at 112%. … And the key is (expansions) are not funded. So there is no capacity solution to this problem.”

The objections raised to this specific project prompted a broader board conversation on the need to take a longer look at development in the area and its impacts on services.

“I don’t mind stepping into this,’’ Commissioner Michelle Stone said. “(Gooding) said, we require something different for this applicant. (But) why don’t we hold ourselves to a higher standard?”

School capacity is a major issue for Marion County, said Stone, who is part of a multi-agency committee looking for solutions to the problem. But there are other concerns, she said, and they all require a more thorough look.

“We have approved so much development in this area, I do think it may be something that we want to consider: doing our own comprehensive study in the growth area…that little triangle for (Interstate) 75, (U.S.) 27, all the way down to (SR) 200 from 80th (Avenue) to the east.”

“I want to take a step back from this region because you’re not the only project going in there,” he said, referring to the tremendous growth along the SR 200 corridor. “I know we have been kind of moving down the road on these projects. I won’t say ignoring things but probably not doing some of the due diligence that we could. And, very honestly, this letter was a little bit of a wake-up call for me in that area. Anybody that is developing in that area wants to know where the future is going.”

Commissioner Kathy Bryant waved the OTOW letters packet after Metcalf’s presentation and said, “We have a highly litigious developer [referring to OTOW] that has already given us all of the opposition and the reasons why. And I’m very concerned about (moving) forward with approving this development, knowing what’s been outlined for us. We’ve done that in the past. We’ve ended up in a lawsuit.”

Stone made a motion to deny the Ocala SW 80th Avenue application, and Bryant seconded, but after more discussion Stone withdrew the motion. Instead, the board decided to table the request until their Dec. 6 meeting in order to get a full traffic study for the project. The board directed county staff “to develop methodology for traffic impact analysis.” County Engineer Elton Holland said the request could be expedited in order for the developer to meet deadlines.

Bryant also requested the developer return with plans for access to the east of the property. The current plan has two entrances facing SW 80th Avenue. The resubmittal from the applicant is due Nov. 8 so county staff can review the material in preparation for the Dec. 6 meeting.

Bryant reiterated that the board needs to discuss development in the southwest triangle, and Stone agreed, adding, “This isn’t going to stop. Nothing is going to slow down.”

Stone said the discussion needs to be an agenda item. “I think we need a comprehensive conversation about what is happening in our community,” she said.

Curry directed County Administrator Mounir Bouyounes to develop an agenda item for a future board meeting to provide for a comprehensive look at the SW 80th Avenue area. Discussion topics would include school capacity, traffic and development, especially in the SR 200 corridor.