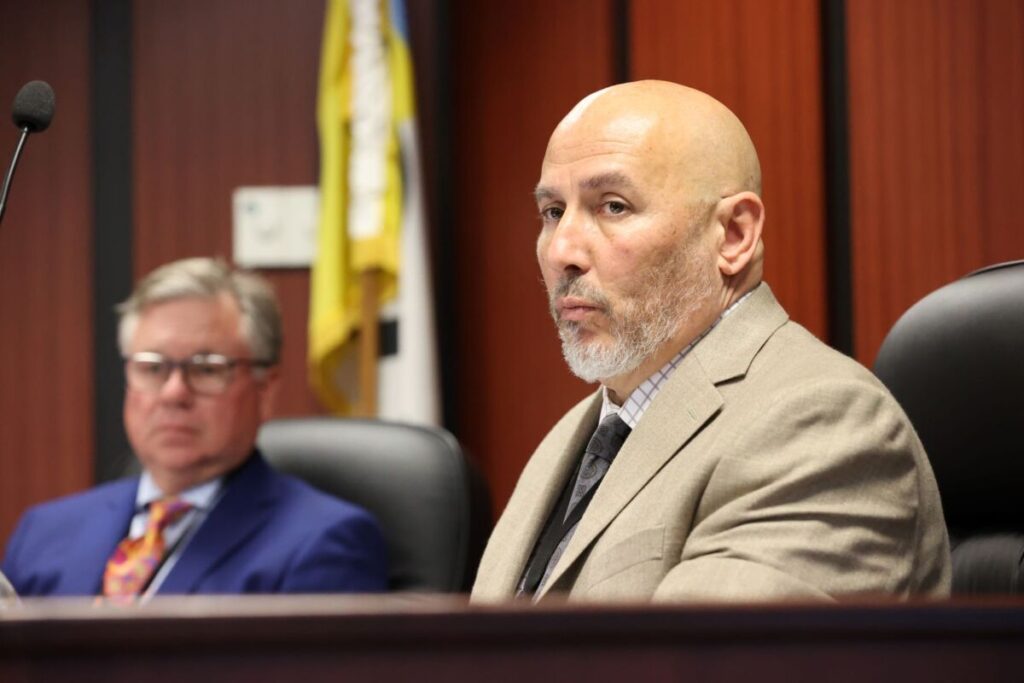 At the end of the Aug. 16 Ocala City Council meeting, Council Member Barry Mansfield asked the rest of the council to consider removing the “interim” tag from Peter Lee’s title and making him Ocala’s new city manager.

Council Member Jay Musleh supported the idea, as did Mayor Kent Guinn, even though he has no vote on the matter. Council agreed to add the proposal to the council’s Sept. 6 meeting agenda.

This was the first public conversation by the council about Lee’s status since its April 19 meeting, when the board abruptly fired City Manager Sandra Wilson and installed Lee in a surprise move at the end of the meeting after a short discussion that did not include any other candidates.

The April city management shuffle raised questions regarding the role of the Ocala/Marion Chamber & Economic Partnership (CEP) in decisions related to the hiring of Ocala’s next city manager.

At the meeting when Wilson was dismissed, two members of the CEP board, Doug Cone and Rich Bianculli, walked into council chambers and positioned themselves up front just as Mansfield began his motion to fire Wilson. During the discussion on Wilson’s fate, Council Member Ire Bethea said “outside forces” were motivating the attacks on Wilson.

Ken Ausley, on behalf of the CEP, had asked Wilson on June 22, 2021 to promote Lee from working in the Growth Management office to assistant city manager, a move Wilson said she had been considering doing already because she said Lee works well with the business community.

Asked later about the CEP’s possible involvement in his appointment as assistant city manager and now interim city manager, Lee said he had no knowledge of any actions taken by the group in that regard.

On Aug. 26, however, Kevin Sheilley, president and CEO of the CEP, sent an email to the city council indicating that the CEP board had 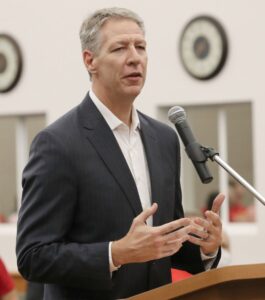 File photo: Kevin Sheilley, the President/CEO of the Ocala Metro Chamber and Economic Partnership, speaks to Florida legislators during the Marion County Delegation at the Klein Conference Center at the College of Central Florida in Ocala, Fla. on Thursday, Oct. 7, 2021. [Bruce Ackerman/Ocala Gazette] 2021.

agreed unanimously to once again encourage the council to conduct a nationwide search for a new city manager. He wrote:

Please find attached a copy of the letter sent to each of you on behalf of the CEP Board of Directors this Spring. At the CEP Board meeting held earlier today, this topic was reviewed and the Board unanimously voted to again request the Council conduct a thorough search.

We understand and know that Pete Lee has done a great job in the interim role and understand the desire by some Council members to dispense with a search. We think this would be shortsighted and ultimately unfair to both Mr. Lee as well as to the City. You want to know that you have the best candidate serving in this position and that he or she was chosen as the best candidate. A search affords you the opportunity to ensure that is the case and ultimately if Mr. Lee is the selection, to know that you truly have the best leader for our community. This request should in no way be seen as a slight to Mr. Lee but, on the contrary the belief that by going through the process and by giving his application the strong review it deserves, you are securing both his and the community’s success.

Under Ocala’s charter, the city council has the authority to hire and fire those serving in the positions of city manager, city auditor, city attorney, and city clerk. Except for the police department, which falls under the supervision of the mayor, the city manager has authority over all other city 1,100-plus employees.

Lee has worked for Ocala in the Growth Management department for 20 years. He skipped past being a department head to being named assistant city manager on July 6, 2021, the same day then-Council Member Justin Grabelle moved, unsuccessfully, to fire Wilson over her dismissal of then-Ocala Fire Chief Shane Alexander.

Parties involved in the 2021 action against Wilson confirmed to the Gazette that Lee would have been their choice for interim city manager had the vote passed that day. That promotion, however, boosted Lee’s annual salary from $85,000 to $150,000. As interim city manager, his base salary is $225,500.

Lee’s promotion to interim city manager on April 19 came after Mansfield made a motion to dismiss Wilson, citing a report from the city auditor involving a whistleblower complaint. That report looked into two issues involving banking and contract matters but did not find any financial losses to the city or any evidence that they rose “to the level of “gross management.’’

Council Members James Hilty and Kristen Dreyer joined Mansfield in the vote to dismiss Wilson, who had served as the city’s manager since June 2020 and who had worked for Ocala for more than 20 years. Council Members Bethea and Jay Musleh dissented, with Musleh saying the issue should be set as an agenda item for a future council meeting.

Exactly 37 minutes after the meeting ended, Tamara Fleischhaker, the chief experience officer for the CEP, wrote this email to the CEP directors:

I want to give you a brief update on actions taken at this evening’s Ocala City Council meeting.

During Council discussion, Councilman Mansfield brought up a whistle-blower complaint that had been filed with concerns over issues raised on how bids are managed and fear of reprisal for bringing the issue to leadership. He made a motion to terminate Ms. Wilson immediately. There was much discussion among the other council members regarding the City Manager and her leadership.

In the end, three council members voted in favor of termination: Mansfield, Dreyer, and Hilty.  Ms. Wilson thanked everyone for the opportunity to serve the City.

Pete Lee has been appointed as the Interim City Manager and Council President Bethea will be working with the City attorney to manage Ms. Wilson’s severance package and set a temporary contract for Mr. Lee.

I’m sure there will be more details in the next few days and we will keep you updated as needed.

The Gazette spoke to the whistleblower, who is no longer employed with the city, and who said they never feared retaliation from Wilson.

On April 28, Chad Christensen, the chairman of the CEP board of directors, sent the council members a letter indicating the CEP board had unanimously voted to encourage the council to conduct a nationwide search for a new city manager.

As the City Council begins to consider the arduous process of selecting a new City Manager, the Board of the Directors of the Ocala Metro Chamber & Economic Partnership would strongly encourage the Council to conduct a nationwide search for the best person to fill this critical leadership role. This is consistent with the Board’s recommendation to the City Council following (former city manager) John Zobler’s announced retirement in December 2019.

Our community is in the middle of an incredible period of growth that has resulted from consistent, strong leadership and partnership between the City of Ocala, Marion County, and the business community. It is imperative that the City Council search to find the very best leader to not only lead the operations of the City but to actively engage stakeholders.

A great example of the success of searching broadly for the best leader is the recent experience of the Marion County School Board with the selection of Dr. Diane Gullett as Superintendent. Dr. Gullett was hired following a nationwide search by the School Board. This search and her hiring have proven to be a great success for not only the School System but our community at large.

While some may question the cost and time of conducting such a search, it is an investment in the future growth and success of the City. We believe this cost is certainly justified when hiring someone to run a nearly $900 million organization such as the City of Ocala.