It’s time for a new mayor of Ocala 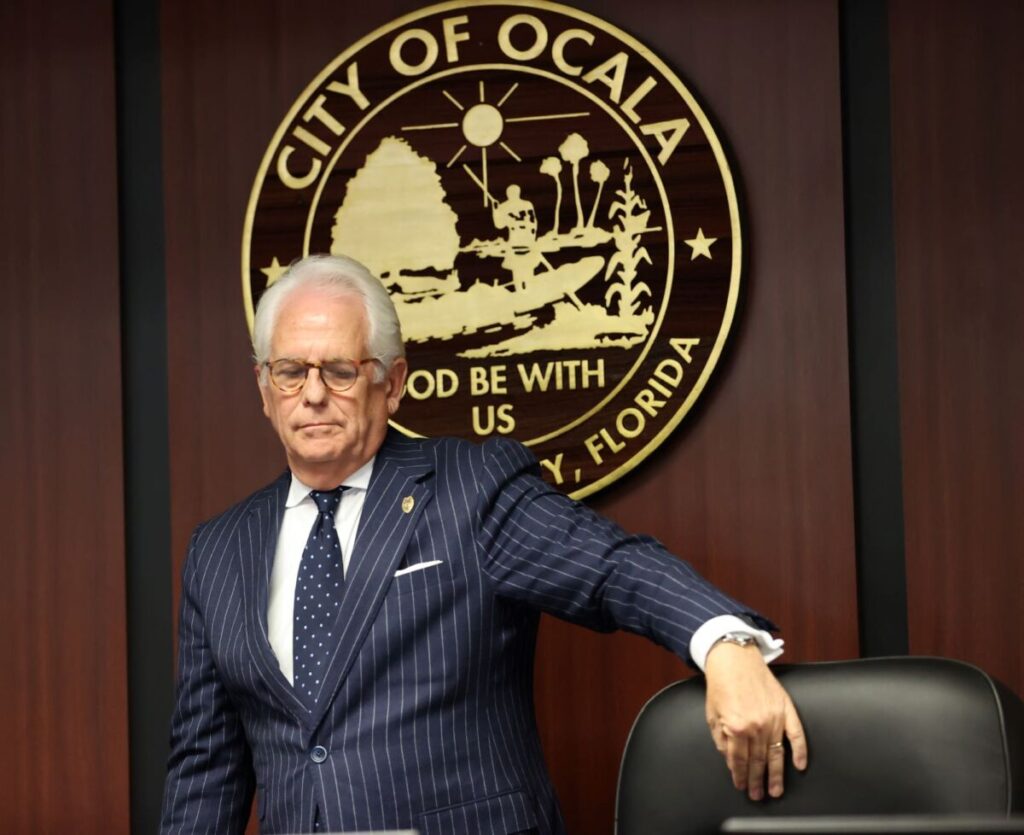 File Photo: Ocala Mayor Kent Guinn returns to his seat before he was re-sworn in during the Ocala City Council meeting in Ocala, Fla. on Tuesday, Dec. 7, 2021. [Bruce Ackerman/Ocala Gazette] 2021.

Next year, the voters of Ocala will once again choose their mayor. While no one has stepped forward to challenge longtime incumbent Kent Guinn, the time has come for the community to make a change.

Historically, the mayor’s duties have been largely ceremonial. The mayor has no vote on the Ocala City Council but does hold veto power. The pay is a nominal $550 a month.

However, there is one aspect of the job that literally involves life and death. Because of the structure of Ocala government, the mayor, not the city council, has sole oversight of the Ocala Police Department.

Guinn has failed miserably in his oversight of the city’s law enforcement agency and officers have suffered because of it.

The recent public revival of a series of incidents from 2016 involving then-Police Chief Greg Graham and female subordinates, one of whom is now a Marion County Commission candidate, should remind voters that as much as Guinn proclaims to “back the blue,’’ that support only goes so far and for certain officers.

This is simply not good enough for the boss of the department, who only answers to you, the voters.

The Gazette’s review of public records detailing how Guinn handled the sexual harassment and retaliation accusations about Graham in 2016 reflect a dereliction of his duty to represent the entire department, not just his friends.

Immediately after two female officers accused Graham of sexual harassment after an event in Washington, D.C., Guinn went public with a press conference. But rather than express legitimate concern for the officers, who had made the possible career-ending decision to accuse their boss of harassment, or at least state that he supports letting the system play out, Guinn went in another direction: He whole-heartedly backed Graham prior to any careful investigation.

Guinn denounced the officers and sought to discredit their attorney, Bobi J. Frank, of Gainesville who, ironically, was the only person actually “backing the blue.’’ Frank appealed to the city council to protect the officers from retaliation as the cases were being resolved, but the council has little to no say in how the police department is run.

Despite the scorched-earth tactics Guinn implemented against Frank, she continues working closely with the Florida Police Benevolent Association to help officers who are in trouble across the state of Florida.  Understandably, the charged political situations involving officer misconduct would require attorneys from outside a community to withstand the heat.

For the money? Hardly. The state has capped any officer’s claim against the agency it works for at $300,000. And if what Ocala experienced with the Graham case is indicative of how volatile and time-consuming these types of cases are to navigate, most attorneys could make money under less combative and more lucrative circumstances.

But consider what this financial cap means to a lifelong Ocalan who chose law enforcement as a career. They may have invested four years in a criminal justice degree, spent years patrolling in hopes of climbing the ladder- but if a management decision essentially ruins their career, the most they can recoup in damages is $300,000. And from that sum, the officer will need to pay attorneys’ fees and costs of litigation while the city defends with other people’s money.

Guinn disagreed with the city council’s unanimous decision to settle the complaints from the officers in 2019 for a total of $500,000.

The mayor pressed for the council to keep fighting the cases in court, which would have given the public more insight into the cases but at a possible financial risk to the city of more claims. Guinn also criticized the attorney, Stephanie Pidermann, who was handling the case for the city. Pidermann, on more than one occasion advised the mayor and council to implement training and education to prevent and manage claims more appropriately.

Ocala has hundreds of police officers and staffers whose careers are at the mercy of those who the mayor hires to manage them.

For those who think this one episode, no matter how appalling, should not define Guinn’s oversight of the police department, consider the heart-wrenching case of Officer Jared Forsyth.

Forsyth, 33, died in a training incident in 2015. It was a national fallen officers memorial event in 2016 to honor Forsyth and others that drew the Ocala police officers and Graham to Washington, D.C., where the sexual harassment incidents took place.

The committee formed to review the circumstances surrounding Forsyth’s death concluded: “The accidental death of Officer Jared Forsyth was preventable and the direct result of policy violations and/or procedural failures which were in place to prevent such an accident from ever occurring. It is important to realize, however, that these issues did not occur in a vacuum, nor did they develop overnight. The violations, practices and concerns raised by this investigation appear to have developed from a department-wide firearms training complacency and a training culture which lacked structure, control, and accountability.”

Guinn refused to answer questions from the Gazette about whether any of these concerns have been addressed.

How the police department, and, in turn, Guinn, have handled another aspect of this tragedy speaks volumes about how far their “back the blue’’ sentiments actually go.

Forsyth was not married, and he had no children. He was the only son of Amy Forsyth. How much did Forsyth’s estate receive from the OPD as a result of his death? Zero. The city only paid for his funeral.

Frank, the same attorney who represented the officers in the allegations against Graham, joined by local attorney Jared King, filed a suit on behalf of the estate of Forsyth against Ocala for damages due to the city’s negligence. The city attorney, Patrick Gilligan, cried foul against the city paying Forsyth’s estate any money and instead is asking the court to implement sanctions against the officer’s estate and its sole beneficiary, Officer’s mother.

Forsyth is the only Ocala Police officer that has died in the line of duty in at least 60 years. Back the blue, indeed.

Another more-recent situation sheds light on the management of the OPD.

Earlier this year, then-City Manager Sandra Wilson presented the city council with results from a confidential city employee satisfaction survey. Each city department head was afforded the chance to work with the independent consultant to tailor the survey questions to their department. All of the employee responses were outside management’s purview until the consultant delivered the final results to the council on March 22.

Curiously absent from the survey results were anything from those who work at the Ocala Police Department. Police Chief Michael Balken would not allow his department to participate in the citywide exercise, and Guinn backed his decision. Once again, it was a missed opportunity for management, including the mayor, as well as city council, to show their support for members of the OPD. It’s almost as if the leaders were afraid to let the public hear what their subordinates might say about how the department is operated.

We’re a year away from the next election for mayor, and it’s a big ask for someone to step forward to challenge Guinn, who was on city council for 12 years before being elected mayor. After all, he won his most recent reelection bid, in 2021, by decidedly trouncing his opponent Manal Fakhoury in a very expensive campaign.

But the people of Ocala deserve a mayor who is more than a ceremonial figurehead cutting ribbons and representing the city at the Kentucky Derby.

Ocala needs someone who will not just be a friend and rubber stamp for the police chief, but someone who will be honest, objective and will respect everyone wearing the badge. These men and women risk everything for us, and it’s time we had their backs.