School concurrency continues to be debated 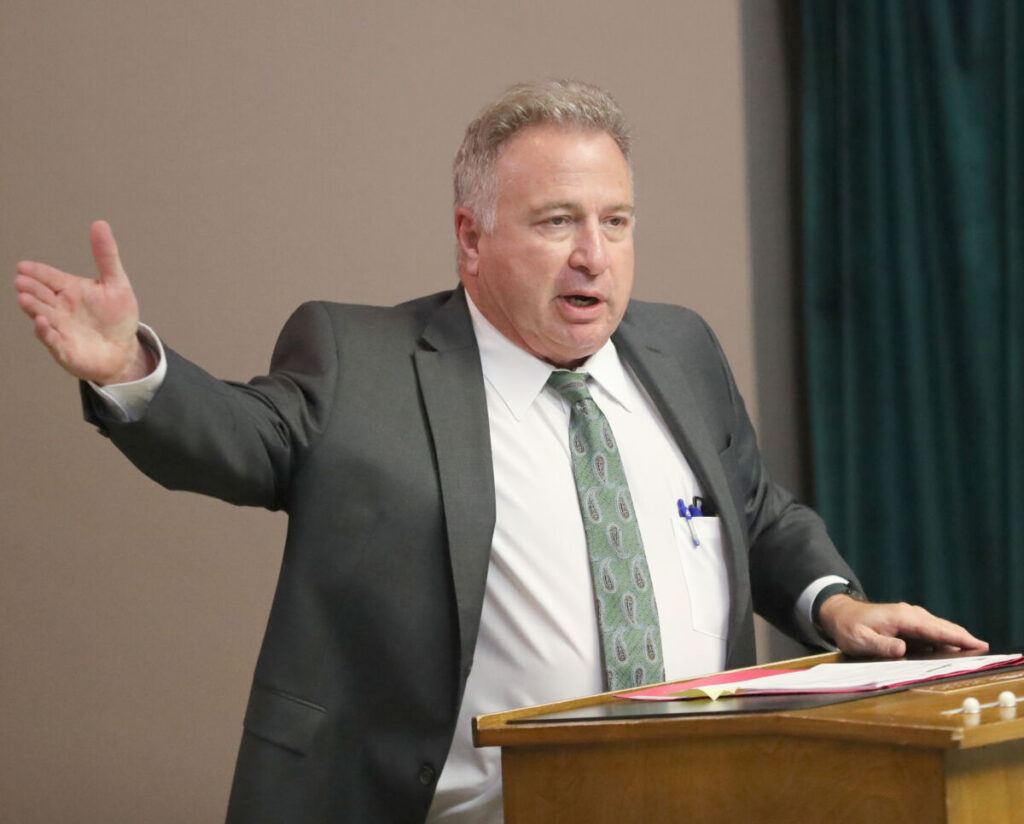 Jimmy Gooding, an attorney, speaks during the Planning and Zoning and DRC Waiver Requests meeting in the Marion County Commission auditorium at the McPherson Governmental Complex in Ocala, Fla. on Tuesday, August 16, 2022. [Bruce Ackerman/Ocala Gazette] 2022.

Reverberations from a contentious Marion County Board of County Commissioners meeting last month are continuing to be felt as local attorneys are waging a war of words over who should take responsibility for overcrowded Marion County schools.

In letters to the board following its decision on Aug. 16 to pause a developer’s rezoning request to allow time for the county to better assess the impacts of the proposed development on adjacent crowded roads and schools, lawyers are criticizing each other and local government for the county’s problems. They all state, however, they are willing to work together to find solutions.

The first letter, dated Aug. 23, came from James Gooding of the law firm Gooding & Batsel, which represents not only the City of Ocala but numerous prominent developers in Marion County. It was sent to the commissioners, county staffers and Ocala staffers and noted the firm was not speaking on behalf of any one client but was following up on the board’s Aug.16 discussion.

Gooding’s letter stated flatly that the school capacity issues are “a result of inadequate planning by the school system. Further, they are irrelevant; under the current interlocal agreement, concurrency is supposed to be measured districtwide.”

Rather than punish developers for the school system’s mistakes, Gooding suggests adopting interim solutions that alert developers of possible new school impact fees. He also states that School Board Attorney Jeremy Powers “lack any development experience” and has a “learning curve on concurrency issues,” while urging the board to “as soon as possible’’ get County Attorney Guy Minter and his staff be involved in the ongoing discussions to revise the 2008 interlocal agreement on development.

Gooding also stated that he and his firm would no longer be working for the City of Ocala as its city attorney while also representing area developers as the firm has done for many years; that contract expires Oct. 31. He expressed a willingness to assist on the issue in the future.

Gooding stated: “Obviously, until we cease becoming City Attorneys, Rob Batsel and I are willing to assist the City of Ocala in any way we can. Further, even after I am no longer representing the City, I hope to be involved in the process both as a citizen and a representative of the development community.”

In response, on Sept. 6, the Tallahassee law firm Stearns Weaver Miller, which represents the On Top of the World development and Colen Built Development, wrote to the county commissioners, county staffers, the Marion County school superintendent, and City of Ocala staffers.

The letter directly rebutted some of Gooding’s assertions.

“Mr. Gooding’s letter states that Commissioner (Michelle) Stone’s concerns regarding the lack of capacity at neighborhood schools are irrelevant because school concurrency applies on a districtwide basis. …We strongly disagree with Mr. Gooding that overcrowding and capacity limitations at nearby schools are irrelevant considerations. In fact, they are legally required considerations for any proposed comprehensive plan amendment that seeks to increase density. His comment ignores the statutory requirement and legal standard to comprehensively plan for long-term school needs. Simply put, comprehensive plan amendments that increase density should not be approved unless it can be demonstrated that school capacity improvements are planned to serve the additional students resulting from increased density.”

The letter also pointed out that statutes require local governments analyze all long-term public facility needs, including for public schools. Accounting for “demand from all existing, approved and vested development; and forecasted future demand from long term growth through the Comprehensive Plan.” 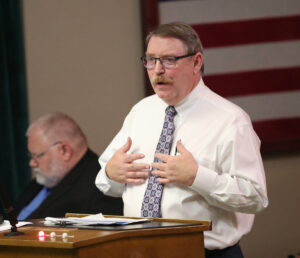 Ken Metcalf, who said he was speaking for On Top of the World, makes a point as he speaks during the Planning and Zoning and DRC Waiver Requests meeting in the Marion County Commission auditorium at the McPherson Governmental Complex in Ocala, Fla. on Tuesday, August 16, 2022. [Bruce Ackerman/Ocala Gazette] 2022.

The letter asserted that, “Marion County has not maintained a tracking system to account for students generated by approved and vested development. This is the same problem that’s occurred with the County’s failure to track cumulative traffic impacts.”

The letter concluded with an offer to assist further. “OTOW, CBD and SWM are available to meet with the Commission, Marion County staff and MCPS (Marion County Public Schools) to assist in addressing these important issues.”

At issue is the question of school concurrency, which generally means that governing bodies must take into account public school capacity when considering whether to approve a development.

Part of the problem in Marion County is that local officials have chosen to consider school capacity districtwide rather than on a school-by-school basis. This mean that some schools in crowded parts of the county that are over capacity (West Port High, Saddlewood Elementary and others) are balanced out by schools in more rural areas that have capacity (such as Fort McCoy Elementary, North Marion High).

In 2011, the Florida Legislature removed the mandate from the statute requiring local governments to consider school concurrency in development decisions and instead made it optional. If the governmental body chose to continue considering school concurrency, it needed to have an interlocal agreement to set criteria for applying it evenly. Governing bodies in Marion County already had done this in 2008. But in 2011, following the Legislature’s action, the parties agreed not to enforce school concurrency.

However, no new interlocal agreement was created then and no formal actions were taken to terminate the 2008 agreement. Both Ocala and Marion County have removed the school concurrency requirements for developers from their respective comprehensive plans.

County Commissioner Michelle Stone is working with the representatives of Ocala and the School Board to create a new interlocal agreement.

Gooding’s letter nodded to historical context and noted the situation today is similar to what Marion County faced in the early 2000s with the housing boom and subsequent crash. He noted that the county and city began using developer’s agreements, which “acknowledged that school concurrency was coming, agreed to take whatever action was going to be required pursuant to the Interlocal Agreement…provided, of course, that the property had not already been developed or platted.”

Funding for new schools is problematic. In a May 3 Ocala City Council meeting, Growth Services Director Tye Chighizola explained to the council that the school board has certain limitations—as does the city.

“They just can’t go build a school. They have state requirements that they have to live by in terms of building a school,” he said, adding that there is definitely an issue in the southwest corridor of the county regarding school capacity and overcrowding.

Chighizola then outlined the “Catch-22” position facing the school board in working to improve school capacity and overcrowding, especially, he said, “when all the development occurs in one area.”

“We have 11 private schools. We have 4,000 seats vacant, when you look at the whole county,’’ he said. “A lot of that availability is in the northeast, in the southeast. There is plenty of capacity there. And that’s what hinders the school board. The state sees those vacant seats and says, ‘You still have capacity in your school system. You have to figure that out, redistrict and redo those things. That’s why they won’t give the money to build further schools.”