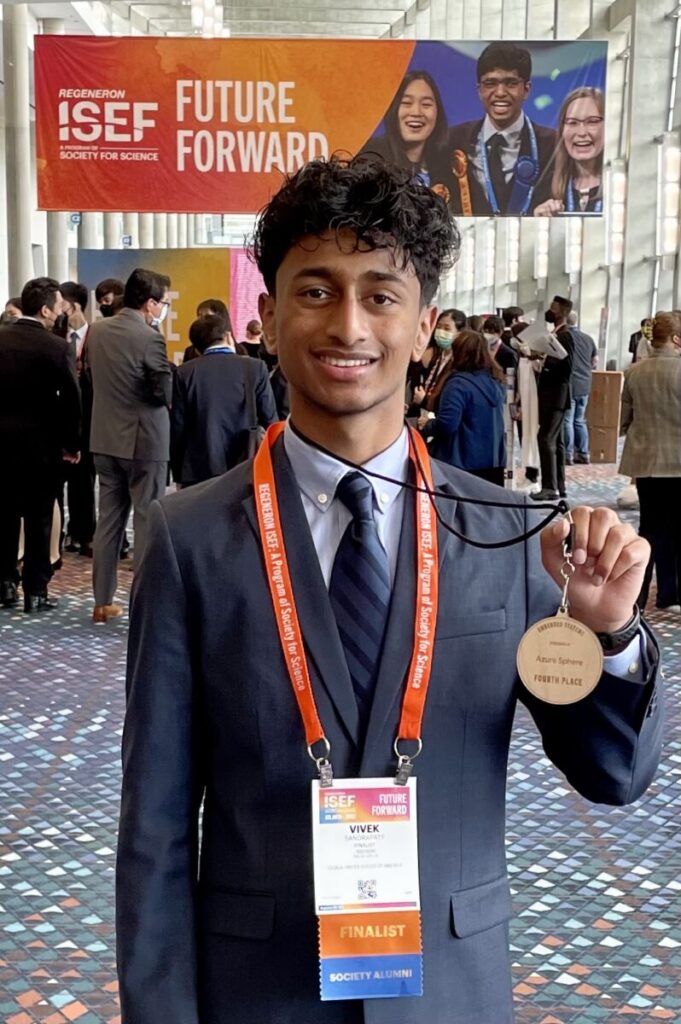 Vivek Sandrapaty holds up his 4th place award at the Regeneron International Science and Engineering Fair. Sandrapaty invented a wearable fabric that can detect injury and alert first responders. [Courtesy of Vivek Sandrapaty]

After seeing and hearing of tragedy, one Marion County student decided to get inventive—and the results have life-saving potential.

Vivek Sandrapaty, a senior at West Port High School, invented a type of fabric for military and police uniforms that can detect injury and immediately signal for first responders. The threads within the fabric are connected to transistors which direct electricity through the fabric, and if disrupted, send signals if the fabric is cut, such as by a bullet or knife.

The idea came to him while at school, when his medical class reviewed a case report of a police officer whose injuries were fatal because no one knew that he had been shot. By the time first responders were alerted of his injuries and came to the scene, it was too late to save him, Sandrapaty said.

“I’m hoping that this could potentially be applied in the military and in the police force,” Sandrapaty said. “With the fabric that I designed, I’m hoping that concept can be implemented into their own uniforms so that we can automatically detect if they’re injured.”

After six months of designing, testing and creating a prototype, Sandrapaty competed in regional, state and national science fair competitions with his invention. Finally reaching the Regeneron International Science and Engineering Fair in Atlanta, he then took home 4th place for the invention he singlehandedly created and built from his own garage.

“The way that this works is there’s an array of conducted threads on the uniform in a coordinate plane pattern. For example, if they’re stabbed or injured in a certain location, the threads in that specific area would break and the electrical values in that area of the uniform would change,” he said.

Sandrapaty said that this occurrence would immediately send a signal to an external receiver which would not only alarm first responders but tell them exactly where on the body the person is injured so that they may know the severity of the victim’s injuries.

The young scientist was able to plan and build a working prototype all from the comfort of his home—more specifically, his garage. Sandrapaty said he ordered everything he needed for the project online, and mostly from Amazon, with financial help from his parents.

His father, Ravichandra Sandrapaty, said this is not the first invention he has watched his son create. The teen came up with his first invention in the seventh grade, when something happened that changed his life forever.

“He had witnessed somebody drowning, and the EMT arrived but they were unable to revive the person at that point,” his father said. “At that point, he went on to create a device that can alert bystanders to people that might be drowning before it’s too late.”

This invention is under the process of being patented, his father said, and if widely adapted could prevent a number of the nearly 4,000 fatal accidental drownings that happen per year. The teen also invented a form of parachute for aircraft that prevents crashes in the case of a malfunction, Ravichandra Sandrapaty said.

He describes his son as a ‘perfectionist,’ and said that he noticed his son’s interest in science at a very young age. He said he feels very proud of all his son’s scientific endeavors and to see his son’s efforts recognized when he accompanied him to the Regeneron ISEF competition. 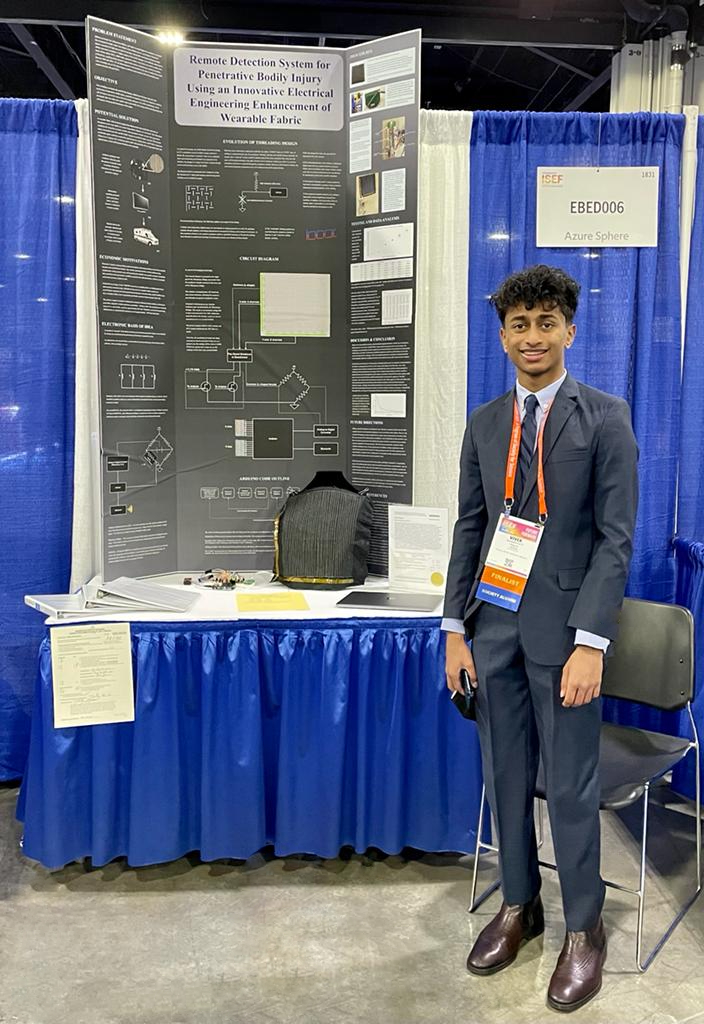 “It was very gratifying to see that he was there on an international stage, because there were award winners from all over the world who had advanced by winning their regional and national competitions,” Ravichandra Sandrapaty said. “To see him there made me feel really proud.”

While the outcome exceeded expectations, the initial designs for the idea did not work and there was a lot of trial and error throughout the beginning stages of his project, Sandrapaty said.

“Initially it did not work. I ran through a couple of different types of ideas—some proved to be impractical, others just not feasible to build,” Sandrapaty said. “I came up with the idea of making an array of threads mostly from taking a physics class.”

Sandrapaty credits his knowledge of the concepts of embedded systems, the ability to apply the application of hardware software for specific purposes, from both the classroom and studying independently. His former AP Chemistry teacher, George Choon, said that Sandrapaty’s use of trial and error speaks to his ability as an engineer.

“[Sandrapaty] has the mindset of being resilient and persevering through his obstacles,” Choon said. “He doesn’t see obstacles as things that get in his way, he simply sees them as challenges to learn from them.”

Choon said that all the projects he has seen Sandrapaty complete have been oriented towards benefitting the safety and health of others. As a veteran, Choon said that he can envision the invention being widely adapted and having the potential to save the lives of many people, whether they be military, police or otherwise.

“Imagine a network where you have everybody working electronically, so you know which soldiers are injured and which soldiers are suffering the biggest impact,” Choon said. “You can also assess casualties—see who’s wounded, see who’s killed and then assess the battlefield that way.”

At the end of the day, Sandrapaty said that he hopes that his work can ultimately save lives and prevent future deaths. He said he hopes to one day become a technology innovator to make this dream of his become a reality.

“The project made me actively think about what I can do to improve issues with shortcomings in current methods in the detection of life-threatening events before it’s too late,” Sandrapaty said. “This is the biggest science fair in the world, so I was super happy to have placed at the center.”