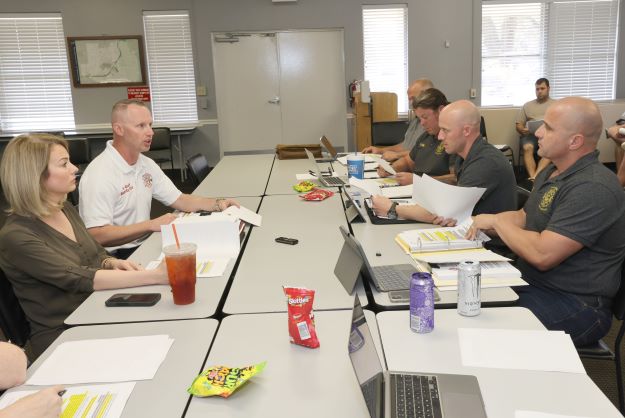 File photo: Deputy Chief of Marion County Fire Rescue, Robert Graff, second from left, speaks as Amanda Tart, the Executive Director of Administrative Services at Marion County Board of County Commissioners, left, and Capt. Danny Garcia, the president of the International Association of Firefighters Local #3169, right, and Lt. Eric Schwartz, also of the firefighters union, second from right, listen during the Collective Bargaining Agreement meeting between the Marion County Board of County Commissioners and the Professional Firefighters of Marion County at Green Clover Hall in Ocala, Fla. on Friday, February 18, 2022. [Bruce Ackerman/Ocala Gazette] 2022.

Editor’s Note: This article has been updated to include statement from county regarding Oct. 1 minimum hourly rates for this department. Additionally, the county has asked the Gazette to clarify that the letter from MCFR medical director was not addressed to the board of county commissioners specifically- instead delivered to the county, addressed “To Whom it May Concern.” A full copy of that letter has been added to this story.

Marion County Fire Rescue is having a difficult time retaining employees, having lost 70 firefighters, more than 10% of the department’s staff this year alone.

According to documents associated with fire union contract negotiations obtained by the Gazette, the department has 68 positions open for firefighters and paramedics, or EMS, and 48 newly budgeted positions.

Although the issue was not on the Marion County Board of Commission’s Oct. 18 meeting agenda, Danny Garcia, president of the Professional Firefighters of Marion County union, used a three-minute slot afforded to the public to tell the board why so many firefighters are leaving the department in “crisis”: poor wages and benefits.

Garcia said better compensation is necessary for the county to keep current employees and attract new ones.

“We need to recruit the best and the brightest to Marion County,’’ he said, “and we need to keep them here.”

Garcia said the wages of Marion County firefighters are not competitive enough, resulting in them finding jobs in neighboring counties and contributing to “all-time low” department morale.

According to the Gazette’s review of the county’s job postings prior to publishing this article,  firefighter/paramedic jobs were posted starting at $16.68 an hour and a firefighter/EMT positions starting at $14.

Following publication of this initial article, the county reached out to the Gazette to provide changes that were implemented Oct. 1 for starting pay.

Bobbi Perez, spokesperson for the county, wrote in an email that “new requirements passed as proviso in the 2022 General Appropriations Act (GAA) that requires Florida Medicaid Providers to pay employees that provide direct care to Medicaid recipients $15 per hour. All of Marion County EMTs would fall under this category and the starting rate changed effective October 1 in accordance with this  act overriding what is listed in the Union Contract.”

This state legislation contributed to a $1 an hour raise for starting EMT/Firefighters under the current union contract.

Perez also pointed out that according to the current union contract, on Oct. 1, dual certified firefighter/paramedics starting hourly rate would increase from $16.68 an hour to $17.21 an hour.

The Gazette’s review of nearby communities finds hourly wages starting anywhere from $2 to $5 higher than what Marion County is paying.

The cost to train and outfit a firefighter in Marion County is about $15,000, meaning the loss of 70 employees this year is over $1 million in direct loss of investment, according to Garcia.

Furthermore, Marion County firefighters are working significant amounts of overtime to compensate for the employee shortage, which Garcia says is not sustainable. The commission budgeted $1.1 million for MCFR overtime pay this year but has actually paid close to $5 million.

Garcia said higher wages will help retain employees, which keeps training costs down and helps long-standing employees avoid burnout from working mandatory overtime to pick up the slack of being short-handed.

“My presentation was just to demonstrate that we are already spending the money that it would take to stabilize our department,” Garcia said.

The fire union and the county recently reopened contract negotiations. Although the current contract has only been in place since March of 2022, Garcia said he feels the situation’s “dire” circumstances necessitate reexamining the current arrangement.

“We told them during the last negotiation that wages needed a boost and expressed concern over the competition with other counties,” Garcia told the Gazette.

After hearing from Garcia, the commissioners questioned the necessity of higher wages and employee retainment.

“You can go to McDonalds, I don’t care what business it is, they’re trying to hire,” said Commissioner Craig Curry, adding that he felt the board has shown “tremendous sensitivity” in regard to budgeting.

Commissioner Kathy Bryant said the board has always supported the fire department and wondered if the problems run deeper than dollars and cents.

“We’ve made tremendous strides, but is it more than just wages?” Bryant asked. “Can we really buy our way out of this?”

Commissioner Carl Zalak said that MCFR will never be satisfied with the amount of money the department receives.

“When robots are doing our job, maybe,” said Garcia. “As long as there are human beings doing this job it’s going to be very difficult.”

Revenue from the penny sales tax has provided millions for new equipment for the MCFR since 2016, but that revenue cannot be used for wages.

Commissioners requested more information from staff and anticipated holding a shade meeting to discuss navigating negotiations with the fire union. A shade meeting is an exemption to Florida’s Government in the Sunshine law allowed for certain specific purposes, such as contract negotiations.

Frank Fraunfelter, Medical Director of MCFR, recently wrote a letter outlining how the loss of employees is impacting the level of care in the field. The letter, addressed To Whom it May Concern, was provided to the union to give to the county to bolster support for the union’s request.

“Losing and having to replace experienced paramedics with new graduate paramedics is a big morale and liability concern. Without an experienced work force, the lack of mentoring from senior medics will be damaging to our county, department and paramedics,” he wrote.

“Healthcare is an experienced-based profession and prehospital care is no different,’’ Fraunfelter said. “The liability of a new medic can be significant given the life-threatening nature of our 911 calls.”

Currently, the union estimates that more than 200 of its rank-and-file members have less than five years’ of experience.