City annexes 30 acres from the county 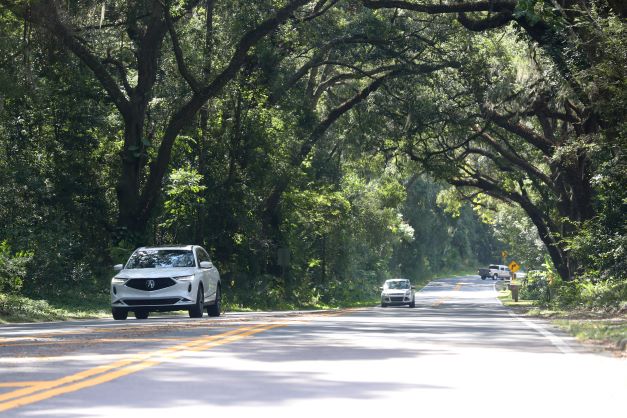 Motorists drive under the tree canopy on S.E 36th Avenue near the intersection of S.E. 35th Street in Ocala, Fla. on Monday, Oct. 17, 2022. A proposed development could strip all of the large trees on the east side of the roadway. [Bruce Ackerman/Ocala Gazette] 2022.

The area around Southeast 31st Street near Southeast 36th Street is home to several canopies of live oak trees that have provided welcome shade and beautiful scenery for many years.

In a unanimous decision, the council agreed to annex two adjacent parcels: a 6.15-acre portion and a 24.86-acre segment off Southeast 31st Street and Southeast 36th Street. It’s the former parcel where the canopies stand.

The annexed properties are expected to be developed, but no formal plans have been submitted. The project, however, is expected to include 348 apartments in three-story apartments set away from a residential area on 36th Street that would be multi-family homes, according to Ocala’s Growth Management Director Tye Chighizola.

Chighizola indicated it is important to the city to “keep that canopy road feeling” and provide a 50-foot buffer to preserve the trees after the city gains access to the property.

In email correspondence with the Gazette, Chighizola described the city’s effort to preserve the tree canopy, noting that staff will have a pre-construction meeting with the developer J & G Cedar Shores 26, LLC to ensure the protection of the trees.

“The trees being saved will be identified on the site plan, and staff will walk the site with their site engineer,” Chighizola via email.

Attorney Fred Roberts, who was at the City Council meeting on behalf of the annexation applicant, spoke in favor of protecting the trees “considering the intent from staff, and the desire we heard from a lot of the neighbors, to retain that canopy.’’

“That is a beautiful road, and a very big priority for our client is making sure that’s preserved,” Roberts said.

Chighizola said a sidewalk and school bus stop might be added to the end of 31st Street as development begins on the annexed section. A sidewalk, however, may call for the removal of some of the trees, he said.

Roberts noted the biggest concerns about the proposed development have been about the increased amount of traffic in the area and buffering of the annexed zone.

“The applicant would be required to do a traffic study,’’ he said. “The applicant has started that process and has submitted their methodology for the project.”

The council also discussed the added revenue that could come from a development in the annexed area. The area is within the Duke Energy service area, meaning it cannot be served by the Ocala Electric Utility.

The city, however, can gain significant revenue from taxes, fire, water, and sewer fees.