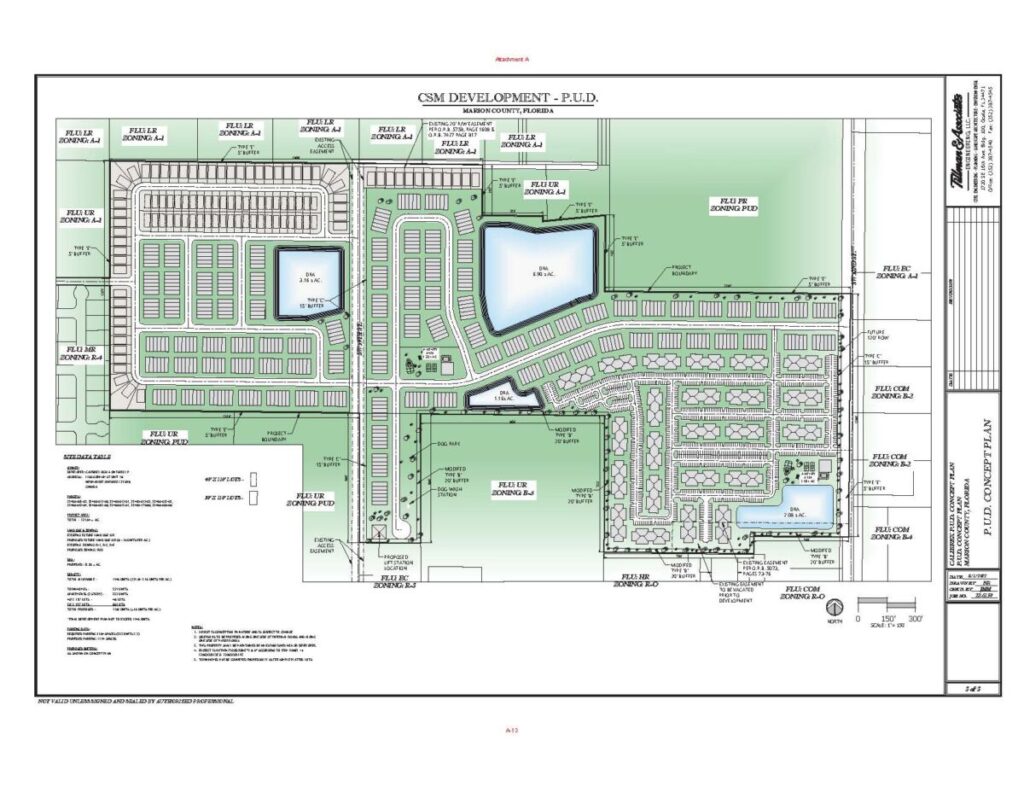 The Marion County Board of County Commissioners tabled a proposed development from the Calibrex Ocala Ontario LP project slated for the SW 60th Avenue corridor in its Oct. 18 meeting, citing concerns about the developer’s site plans, traffic issues, and school capacity while acknowledging opposition from neighborhood horse farms.

The developer seeks to rezone nearly 122 acres currently zoned as general agriculture, residential estate, single family and one/two family dwellings to allow for 1,200 homes, including 529 townhomes, 552 apartment units, and 108 single-family homes. The proposed parcels for development are located between SW 52nd Street south to properties on SW 63rd Street, as far west as 65th Avenue, and east to what would be 62nd Avenue, currently undeveloped land. The current usage is agricultural, grazing land and low-density residential; many of the area neighbors operate horse farms.

Over a dozen neighborhood residents spoke in opposition to the development.

One of the requests from the neighborhood was for a wildlife corridor along the southwest portion of the property along NW 65th Avenue that would also serve as a buffer from the horse farms and the development.

“There are no benefits conferred to Marion County by Calibrex,” stated Mira Korber, a neighborhood organizer. The project “only serves the developer, not even the future residents. The developer is not materially required to contribute to the maintenance or upkeep of schools, roads, and municipal solid waste, water and sewer facilities.” Those burdens, she said, will fall to Marion County residents, not just those in the Calibrex project. Of the 121 acres, she said, “Leave it alone. Please deny the rezoning.”

Korber’s attorney, Ralph Brooks, accompanied by expert witness Daryl Max Forgey, a certified land use planner, asked for an outright denial of the project. They cited, among other objections, the incompatibility with neighboring uses per Florida statutes; “24-hour noise and light pollution to an existing rural neighborhood”; the application and staff report that “profoundly misinterpret” the meaning of open space and “equate it with recreational opportunities for the development’s residents” such as the proposed pools, clubhouses and pickle ball courts; and an urban density that is inappropriate for the surrounding neighborhood.

The attorneys and residents both mentioned the close proximity to horses as reason for denial. “The 50 and 60 foot heights are simply too foreboding for development on the edge of rural use, especially one involving horses.”

Additionally, Reggie Boutillier, attorney for On Top of the World and Colen Built Development attorney, which is working on the Calesa Township development of 5,000 units, spoke to traffic issues. He requested a condition that once Calibrex completes 500 units, that 52nd Street be improved from the development east to SW 60th Avenue and that a new traffic signal be installed at that intersection. Also, that “The impact fees paid for this project would be pipelined” to the future four-laning of 38th Street between 80th Avenue and 60th Avenues, which borders Calesa Township on its north side. Commissioners and county staff would not agree to that stipulation.

Traffic capacity was a key discussion point, with BOCC commissioners agreeing that a new signal at SW 52nd Street and 60th Avenue would also help alleviate new traffic expected for other projects in the area. Two other major developments on 60th Avenue were approved last year. Ocala Townhouse South is a 280-unit development planned for a 36-acre tract on the east side of SW 52nd Street; and Pointe Grand Ocala South, 548 apartment units on 38.5 acres, is on the west side of 60th Avenue at 58th Street.

The board made several conciliatory change requests to the developer after hearing the public comments. The original concept plan for the Calibrex development showed a 5-foot wide vegetative buffer for the backyards of the single-family homes on the east side of 65th Avenue. Neighborhood residents and Commissioners Bryant, Stone and Zalak had extensive back-and-forth with Calibrex representatives regarding a suggested revised buffer at that point with a 6-foot privacy fence on the outside of a wider buffer of 15 feet, and even moving a drainage retention area to the west side of the southwest part of the project.

Commissioner Kathy Bryant said, “I’d like to see the fence on the inside of the buffer with green outside so the neighbors aren’t looking just at that white fence.”

School capacity was also debated by commissioners and developer representatives. Schools serving the area include Saddlewood Elementary, Liberty Middle School and West Port High School, all of which are currently over capacity. The county has no revenues or plans to build additional schools.

Prior to the meeting, Korber was hopeful about the project’s opposition. “In a fantasy world, they would entirely deny this and turn it into a true public Marion County park for the benefit of its citizens. Realistically, I think we can get them to scale back the urban density and increase the buffers. That’s my real goal.”

The developer will submit revised plans with requested changes and more detail for a new hearing slated for Nov. 15.