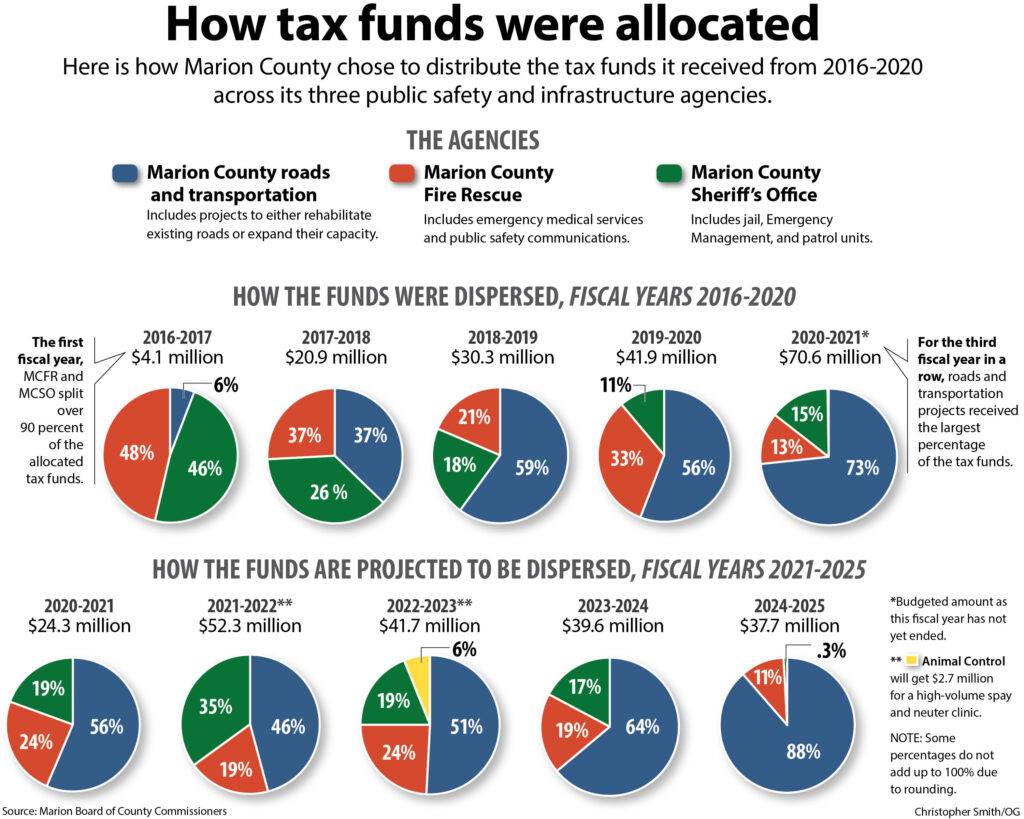 And while the percentages it allocated to different road and emergency services sometimes varied widely from year to year, in the end, the proceed were spent roughly equally.

Marion County residents originally approved the One Cent Public Safety and Infrastructure Sales Surtax, also known as the penny sales tax, in 2016. The four-year tax program was targeted to pay for infrastructure and public safety projects. In 2020, voters renewed the tax for another four years. The tax adds a penny to the state 6% sales tax, effectively making it a 7% sales tax in the county.

The money collected cannot go toward payroll or recurring costs, but county and city governments can disperse the funding across their agencies as they see fit.

While in 2016, the county only received $4.1 million because the tax was collected for only a portion of the year, the amount has continued to grow in ensuing years.

“As projects and equipment get delayed, which happened a lot during COVID, their budgets are carried forward to the next year,” said Michael McCain, the county’s fiscal manager

Among some of the larger projects and purchases by MCFR was $2.6 million to purchase land and build a new Rolling Greens fire station.

MCFR also purchased gear and logistical items, as well as installed direct capture systems, which trap and remove CO2, protecting firefighters from the deadly gas emitted from their trucks. The department acquired 300 self-contained breathing apparatus costing $2.3 million, and 85 Toughbook computers to assist with the transmission of patient data at emergency scenes.

Much like Marion County Fire Rescue, Marion County Sheriff’s Office also used the funds to purchase a mix of new vehicles, gear for their employees and to erect new buildings as well as refurbish existing ones.

The bulk of MCSO’s portion went to vehicles, as the department purchased 315 new patrol cars as well as vehicles for evidence technicians and civil process staff at a cost of $13.5 million. Not all the vehicles MCSO purchased were road-based vehicles however, as the department spent $4.3 million on a new helicopter after the previous one was lost in an accident.

“The sales tax has been extremely helpful in catching us up with our equipment needs, especially vehicles… our fleet was very aged and in terrible shape before the sales tax was approved. We are now on a normal rotation with replacement vehicles and our deputies are driving newer and safer vehicles with updated equipment,” said Sgt. Paul Bloom, the sheriff’s spokesman.

The department also spent almost $4.3 million to upgrade the fiber optics and IT networks which new phone systems in multiple departmental buildings. “It has also been beneficial from the IT side as we have been able to make major upgrades to our radios, equipment and network,” Bloom said.

Additionally, MCSO spent $5.9 million on a new facility which will house evidence, evidence employees, as well as the DNA and forensics labs.

“It [funds from the penny sales tax] has addressed several building concerns, with the newest being the forensics building,” Bloom said.

MCSO said it has not had any issue with how the funds are divided up, or with how much it has received so far.

“We have received all of the funding we have requested so far, and I am not aware of any problems that have occurred. We are very thankful for what we have received and expect to get from the sales tax,” Bloom said.

The Marion County Board of County Commissioners allocated penny sales tax funds to either fully or partly pay for upgrades to just over 75 miles of roads throughout the county, with some projects being completed and some still in progress.

The projects were designed to either rehabilitate existing roads or expand their capacity, as well as a planned interchange on Interstate 75.

“Budgets for, say, road projects, move slower on account of the planning, acquisition and design phases not being able to be completed until the revenues are received. This makes road project funding move differently than vehicle or equipment purchases or a building construction project,” said Stacie Causey, a Marion County spokeswoman.

The proposed interstate interchange project, known as NW 49th/35th St. phases 2B & 2C is a joint project with the Florida Department of Transportation and is currently underway. This 1.2-mile portion of the project will carry a total cost of $47 million, with $26.5 million coming from penny sales tax funds.

Other road improvements that incorporate penny sales tax funds and encompass new roads being built include $12.2 million of a total $20.4 million for a five-mile stretch of a new four-lane road from SW 95th Street to SW 42nd Street, and $11 million for a 1.1 mile stretch of road as part of the same project.

A full list of road projects and their specifications can be found at www.marionsalestax.org/road-projects-review

Items used for emergency communications included nearly $8.2 million for more than 2,000 800MHz radios that were distributed to public safety personnel throughout the county including to MCFR, MCSO, and animal control.

Future projects
With the renewal of the sales tax through 2024 the county looks to expand the departments which receive funds, including to animal control and emergency management.

“They fall within the guidelines of the surtax funding; public safety improvements and major road projects,” Causey said.

She said initial discussions have targeted to spend 60% of the next four year’s tax revenue on transportation and 40% on public safety, but the plans can change.

Still there are some projects which are anticipated.

MCFR has plans to rebuild Fire Stations 2, 11 and 9 and remodel Fire Station 24 at a cost of just over $19.3 million. It also plans on building a training classroom and pad in Martel for $3.9 million.

MCSO currently has plans to renovate and improve the Marion County Jail at a proposed cost of $8.6 million. They also hope to spend another $11.4 million to build a new evidence building, DNA and forensics lab, a new hangar and a special operations building, among other projects.

They hope to buy 188 new patrol vehicles and 50 other vehicles for staff, inmate transport and emergency management use at a total proposed cost of $13 million. A new mobile command unit would cost $1.3 million.

Plans call for resurfacing another 51 miles of roads in the county. Another 15 miles will include lane additions and widening. The total proposed cost of $112.89 million.

Animal Services is currently planning to upgrade its facilities and to add a high-volume spay and neuter clinic. The project will cost $2.7 million.