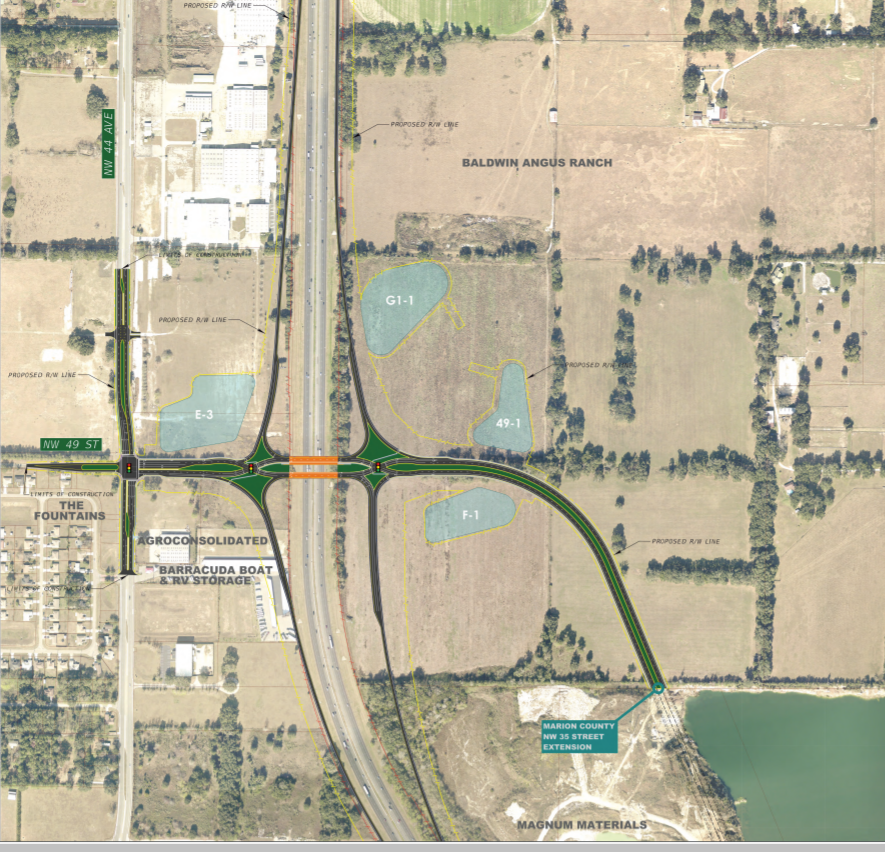 State Transportation officials on Wednesday night unveiled their concept for the new interchange at Interstate 75 and Northwest 49th Street in Ocala.

The “diverging diamond interchange” design proposed by Florida Department of Transportation planners and engineers is a model that is becoming increasingly popular around Florida. The main lanes of traffic will crisscross at signalized intersections on either side of the interstate, negating the need for vehicles to make left turns across multiple lanes of traffic.

The half-hour public hearing at the Southeastern Livestock Pavilion in Ocala was a critical next step in the FDOT’s march toward building the interchange. The project has been on the drawing boards for years at the request of Marion County and City of Ocala officials who want to open that stretch of I-75 to large-scale commercial development, particularly distribution centers. FDOT and local officials say the project will also take traffic pressure off the State Road 326 interchange to the north and the U.S. 27 interchange to the south.

County and city officials must sign off on the concept proposed by the FDOT before the project moves into the design phase, where FDOT engineers will create the blueprint for the project. Next, according to FDOT documents, the state will purchase the right-of-way needed for the project, then begin construction.

Construction could get under way as soon as 2024.

The total cost of the project is estimated at $86 million, including $45 million for right-of-way purchases and $41 million for construction.

Wednesday’s hearing drew roughly two dozen visitors, many of them residents who live near the project, including The Fountains subdivision west of I-75 off Northwest 49th Street. A few expressed concerns about how they would be impacted by the additional traffic that the interchange would bring to the area and what FDOT would do to buffer them from noise.

According to FDOT engineers, the area is becoming increasingly congested. If the interchange is not built, the east-west Northwest 49th Street is projected to host 14,600 vehicles a day by 2045 and will fall to an “F” level of service grade for its ability to efficiently move traffic.

And while building the interchange would bring even more traffic – roughly 21,500 vehicles a day to Northwest 49th Street by 2045 – the various improvements would keep the level of service at an acceptable “C” grade, engineers say.