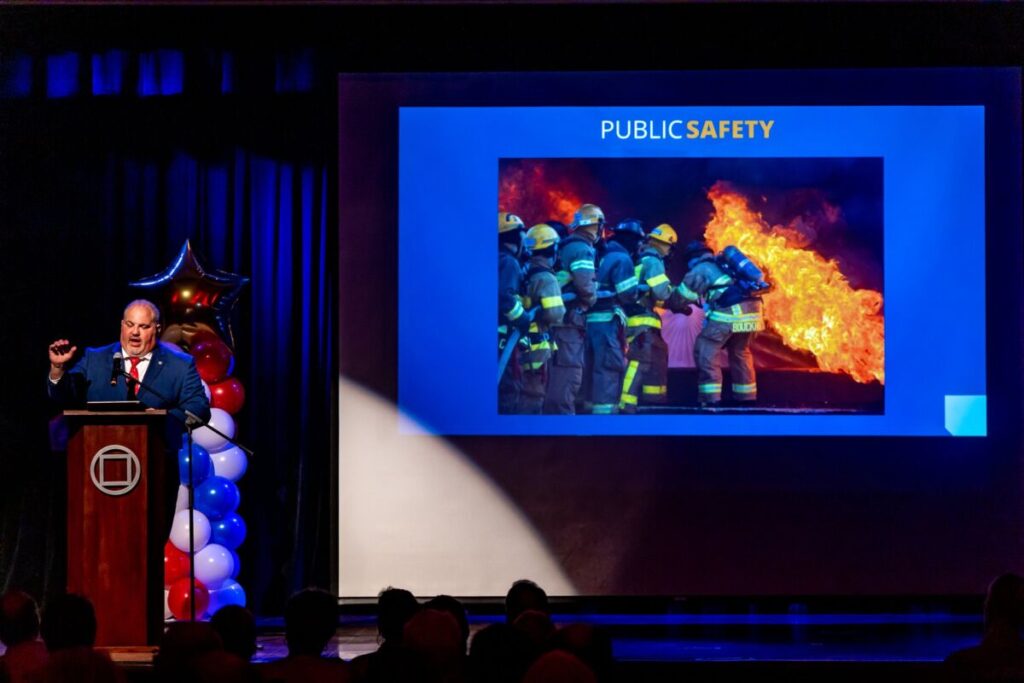 Editor’s Note: This article has been updated to include Commissioner Zalak’s response to the Gazette’s inquiry and that the two cases were settled in May of 2021.

In his bid for re-election this year, incumbent District 4 Marion County Commissioner Carl Zalak touts his support for Marion County first responders high up on the list of his accomplishments during his 12 years in office.

One segment of those public servants, however, begs to differ. The Professional Firefighters of Marion County (PFFMC) has endorsed Rachel Sams, one of Zalak’s opponents in the Aug. 23 Republican primary and a former first responder herself. Sams served on the Ocala Police Department for four years before resigning in 2017.

Daniel Garcia, president of the PFFMC, explained to the Gazette the union chose not to endorse Zalak because of his spotty record when it comes to backing its members.

“Zalak has been an occasional supporter of the fire department,’’ he said, “but he’s rarely been a supporter of firefighters, EMTs or paramedics.”

In an emailed response to the Gazette, Zalak said he has supported Marion County’s first responders through millions of dollars in new equipment and in salary increases.

Asked by the Gazette to elaborate, Garcia pointed to lawsuits Marion County Fire Rescue captains filed in federal court in September 2019 under the Fair Labor Standards Act (FLSA) challenging whether they were exempt from overtime pay as managers or whether they were considered nonexempt employees entitled to overtime.

If they were nonexempt, the captains claimed, they would be entitled to overtime pay at time and a half after working 106 hours in a 14-day pay period. The county said they were classified as exempt from overtime pay because of the managerial role they served within the fire department.

Two groups of fire captains each filed a suit. One group was made up of retired captains and the other group consisted of 16 captains who still were employed by Marion County.

Transcripts of closed-door meetings between attorneys for the county, county commissioners and County Administrator Mounir Bouyounes became open to the public after the cases were settled in May 2021.

Besides discussions of legal strategies and costs, there was at least one instance in which Zalak told the group the fire captains “are going to go through hell’’ because they sued the county, only to be cautioned by County Attorney Matthew Guy Minter against retaliating against the first responders.

Garcia said the captains filed the suits because it was the only way to clear up the wage dispute. But what the union learned about Zalak through that process left the members feeling bitter.

“We could never support a commissioner who would consider retaliating against any county employee,” he said.

Minter, the commissioners and Benton N. Wood of Fisher & Phillips, an Orlando firm hired to advise the county, met at least four times to discuss the litigation in addition to one-on-one conferences between commissioners and their lawyers.

In the minutes from meetings on April 13, 28 and May 26, 2020, all limited specifically to the lawsuit brought by the group of 16 captains who were still employed, the attorneys gave their best guess on the likelihood of the commissioners prevailing in the litigation.

During the April 28 meeting, Minter estimated the county commission’s attorney’s fees were about $40,000.

More importantly, he also told the commissioners the attorney for the group of working captains had warned the county against taking any retaliatory actions against them. Zalak, the meeting transcript shows, was not inclined to follow that advice.

Minter cautioned Zalak, “You need to be careful what you’re saying there.”

In his response to the Gazette, Zalak said he was referring to the fire captains having to testify as part of the litigation, where he predicted they would lie under oath.

“I was referencing them having to take the stand and perjure themselves as to their managerial duties,’’ he said. “If people are going to lie about their duties, then I think we should make it very hard on them to tell those lies in court.’’

The group discussed the factors that would be considered as to whether the captains were managers, who created policy, or supervisors, who carried out policies and orders that were made at a higher level.

Commissioner Michelle Stone argued district captains should not be categorized as first responders because of the supervisory role outlined in their job description. Commissioner Jeff Gold pointed out that the captains in fact do respond to scenes, noting an instance in which one of the captains in the suit had been electrocuted, doing a “360 [degree spin] of a scene.”

The attorneys advised the commissioners that the board had at a 50/50 chance of winning the suits, but there was always risk. The commissioners told them to move forward with defending the two suits.

Almost a year later, on March 11, 2021, at what would be the final meeting on the case, the attorneys for the county recapped testimony to the commissioners that supported the captains’ claims that they were not managers.

For example, the districtwide captains did not perform evaluations of those in lower rank, which Wood said came as a surprise to Fire Chief James Banta. The captains testified that they did not hire, fire, or discipline employees.

Instead, Wood characterized the captains’ testimony as “we sleep in the stations, we go on calls. We are not typically the first on scene. The first unit on scene establishes command of that fire scene. And it’s typical for us, when we do arrive, to not tamper in any way with the command of that scene, unless there’s something problematic at that scene. And so, it’s not unusual for us to put on our bunker gear, go into fighting fires, and performing rescues, when necessary.”

Over the year of litigation, a reorganization of the fire department had taken place, something that Garcia confirmed had been in the works before the lawsuits were filed.

Wood, referring to the group of working captains, told the commissioners, “As a result of recent reorganization, some of the Garcia plaintiffs are now station fire captains and some of them have been promoted to battalion chief positions.”

One of the big differences between the two groups of litigants was the potential for damages. The retired fire captains, for instance, were no longer accruing overtime pay that the county would have to fund should the court rule in their favor. However, the group of working captains represented additional financial risks to the county should the court rule for them. By the time the commissioners met in March 2021, the potential back pay for the captains had continued to accrue, and the settlement offer had jumped almost $250,000 – from $537,057 to $784,000.

The county’s attorneys’ fees were accruing, too. Minter told the commissioners at the last shade meeting, “We’re over $230,000 on our side in attorney fees at this point.”

Zalak throughout the minutes suggested the captains were attempting a money grab with the suit. “They want their million bucks and the right to come back and sue us again,” he said at one point.

Zalak said the captains were paid enough, adding that if the attorneys could present evidence of how much the firefighters make in “side jobs” and in their pensions during trial, the jury would find that the captains are compensated fairly.

“You’ve got fire captains who are claiming that they’re being mistreated and underpaid, but the fact of the matter is that there was a professional decision that they made to transition into management, and there are some perks that come with management,’’ he said.

“When you work on shift, try to take these people that work on shift, and say: ‘No, we’ re going to put you on a 40-hour work week.’ They don’t like that too much because they have side businesses and side jobs that, you know, it’s in their worst overall interest to do that. So, I mean, there are perks that come with being salaried personnel on shiftwork. And so, what they’re doing here is certainly trying to have their cake and eat it, too,” he said.

Wood then explained the flip side of that argument.

“They can point to some examples of firefighters or fire lieutenants, because of the overtime hours that they work and get paid for, that, when you look at their gross pay at the end of the year, actually make more money than the fire captains,” he said.

The county settled both lawsuits, paying the captains back pay as well as their attorneys’ fees and costs in May of 2021.