How much does it cost to keep police officers in schools? 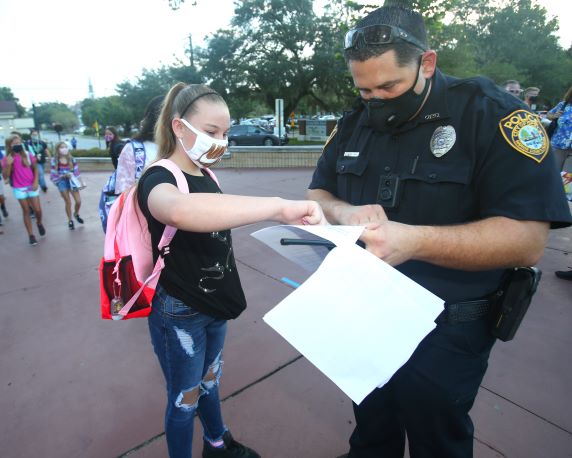 File photo: Lilyana Nieland, 12, a 6th grade student, gets some help finding her classroom from School Resource Officer Keith Jarvis of the Ocala Police Department on the first day of school at Osceola Middle School in Ocala, Fla. on Monday, August 24, 2020. Marion County Public Schools opened up for classes for the first time on Monday since the COVID-19 pandemic began in March. [Bruce Ackerman/Ocala Gazette] 2020.

The law enforcement officers stationed in public schools across Marion County not only make students and teachers feel safe, their presence is mandated by law. While there is never too high a price to pay for safety, hiring officers to meet requirements comes at a steep cost for the school district.

The Marion County Sheriff’s Office (MCSO), Ocala Police Department (OPD) and Belleview Police Department (BPD) all provide School Resource Officers (SROs) to schools across the county, and the Marion County School Board uses money from its general fund to reimburse the city as much as $75,000 per officer per year. Having at least one SRO in every school is required by the Marjory Stoneman Douglas High School Public Safety Act, passed by the Florida Legislature in 2018.

The resource officer contract between the school board and MCSO comes at the highest cost to the school board, with a total of $8.2 million for the cost of 39 SROs for 33 total schools over the course of three years.

In the first year of the agreement with the MCSO, the school board will reimburse the sherifffor the cost of $60,000 per SRO, for a yearly total of $2.4 million, which will be paid at a rate of $195,000 per month.

Another large allocation of funds will go towards the city of Ocala, whose three-year contract comes to a total of $4.6 million for the cost of its police department placing 18 SROs at 16 schools. The cost per SRO is highest with the city of Ocala.

“The school board will reimburse the city $88,777 per SRO, for the first contract year of the SROs listed…and $84,366 per SRO for the remaining two years of this three-year contract,” according to the OPD contract.

On the lesser side financially, the total cost for the three-year agreement with the city of Belleview is $205,383 for the one SRO that BPD will be placing at Belleview Elementary. For the 2022-23 fiscal year, the school board will reimburse the city $65,149 per SRO, and the cost will increase by 5% for years two and three respectively.

The funding provided by the school board will be paid to the city monthly at a rate of $5,429 for the first year, $5,700 for the second year and $5,985 for the third year, according to the BPD contract. The contract was signed by City Administrator Sandi McKamey, Mayor Christine Dobkowski, City Attorney Fred Landt, Board Chair Eric Cummings, Superintendent Diane Gullett and Board Attorney Jeremy Powers.

Read more about the cost difference between this year’s RSO contracts and previous contracts for the three law enforcement agencies here.