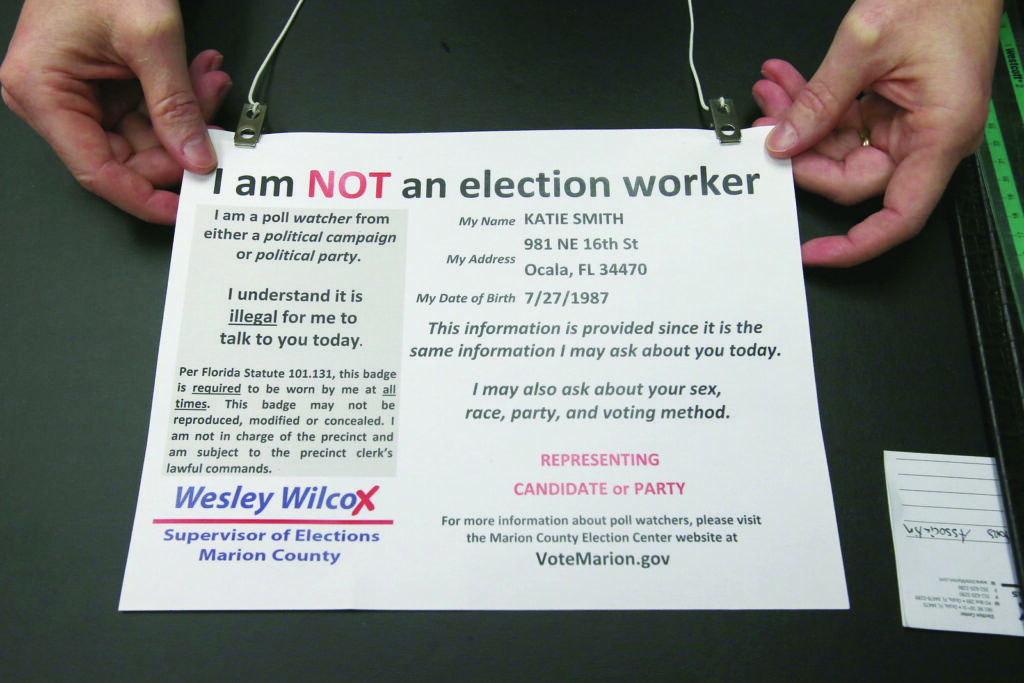 Supervisor of Elections Wesley Wilcox describes a sample of a poll watcher id in his office at the Marion County Election Center in Ocala, Fla. on Thursday, Oct. 22, 2020. Wilcox said that he has poll watchers wear the id to avoid voters from misidentifying them as election workers. [Bruce Ackerman/Ocala Gazette] 2020.

Supervisor of Elections Wesley Wilcox describes a sample of a poll watcher id in his office at the Marion County Election Center in Ocala, Fla. on Thursday, Oct. 22, 2020. Wilcox said that he has poll watchers wear the id to avoid voters from misidentifying them as election workers. [Bruce Ackerman/Ocala Gazette] 2020.

One of the dominant themes of the 2020 election has been the possibility of voter fraud, a refrain that President Trump, in particular, has uttered often and loudly in recent weeks and months.

But neither side is taking chances.

Democratic contender Joe Biden has hired 600 lawyers who could be deployed to challenge election results state by state, media reports indicate. Likewise, President Donald Trump is backed by a group called Lawyers for Trump!, which includes former Florida Attorney General Pam Bondi, and which, according to Politico, has recruited “thousands” of attorneys to guard the president’s interests on election night.

Both sides also have enlisted volunteer “poll watchers” — tens of thousands of them for each side, news reports say — to monitor activity within the individual precincts.

Yet in Marion County, where a couple hundred people have volunteered to be poll watchers during early voting and on Election Day, Elections Supervisor Wesley Wilcox is not worried.

Despite a bitterly contentious presidential race, Wilcox predicted a long local tradition of peace at the polls will prevail.

And if not, he added, there is a plan to deal with that.

While the hysteria about voting has been ratcheted up in this election, poll watchers are nothing new.

Reuters reported this month that such observers were on duty during U.S. elections back in the 18th century. More recently, poll watchers ensured newly enfranchised black Americans could vote in parts of the South following civil rights legislation passed in the 1960s.

Wilcox said a generation or so ago poll watching was a “get out the vote” effort.

The parties, he said, obtained lists of their voters and tapped the party faithful to check off who had cast ballots. They then went looking for those who hadn’t voted to encourage them to do so.

More recently, though, the suggestion has been that each party must deploy motivated rank-and-filers to protect their interests.

“I really don’t know what they’re watching for,” said Wilcox. “But the parties have gotten so acrimonious toward each, if anything, the watchers are watching each other. It’s gotten so bitter.”

Wilcox rejects the idea that thuggish, armed hordes will show up at precincts to intimidate voters. Access to precincts is tightly controlled, and the process to become a poll watcher is sufficiently rigid that those who seek to disrupt voting will be excluded or quickly handled, Wilcox said.

Wilcox is most offended by those who believe something diabolical is going on inside precincts. That’s because he makes it a point to include Republicans, Democrats, minor-party members and unaffiliated voters to work as precinct volunteers, and welcomes the public to observe the training.

“You don’t get much more transparent, and that’s by design,” he said.

By state law, each party and each candidate can have one poll watcher in a precinct during the election.

Poll watchers must register with the county elections office. They are then vetted to make sure they are registered voters in Marion County, as required by law. They are then given a badge, the size of a sheet of paper, that clearly indicates they are not election workers.

Wilcox added that right now, the number of poll watchers registered by both parties is “pretty equal,” at about 100 or so each.

LaVonda McCandless, chairwoman of the Marion County Democratic Party, said during early voting, they will work four-hour shifts for each of the 13 days at all nine early-voting locations.

Some of them already have dropped out, she noted. For example, they were concerned about voters not wearing masks, were out of town, or felt the job was more responsibility than they wanted. McCandless said the party was working to get those shifts covered.

On Election Day, the local party paired with Democratic nominee Joe Biden’s “Voter Protection Team” to identify 19 “high priority” precincts. McCandless expects 110 certified poll watchers will be on duty that day for four-hour shifts, all of which are currently filled.

McCandless said the party also has a “large number” of stand-bys who can fill in, if needed.

All poll watchers have completed an online training program, she said, and will have access to a smartphone app to report incidents at the polls to Biden’s team.

The Democratic poll watchers will be on the lookout for long lines, voters who are given provisional ballots, or any other “unusual” issues, McCandless said.

On the other side, Glen Fiorello, head of the Trump Club of Marion County, has organized the poll watchers on behalf of President Donald Trump.

Fiorello, who is a former Marion County commissioner, admitted that he was not familiar with poll watchers until the Trump campaign reached out to him to organize them.

He said the president’s supporters are arrayed similar to the Democrats, with one exception. The GOP is focusing its monitoring efforts on the high-traffic precincts, now and on Election Day.

“We’re there to make sure there are no shenanigans going on,” Fiorello said. “We’re just another set of eyes, a good check and balance, a good insurance policy.”

Under state law, poll watchers cannot interact with voters. Voters could talk to them, but they are not permitted to respond. And any questions poll watchers may have regarding the validity of specific voters must be posed to Wilcox’s staff, not to the voters.

Poll watchers are among the limited number of people allowed in a precinct as voting occurs. The rest include voters themselves and a helper if necessary for physical limitations, election staff and emergency medical personnel, if summoned.

Wilcox said he’s not concerned about mayhem from agitators when voters got to the polls.

Marion County’s decentralized precinct system is a factor — with 122 precincts housed in 117 different locations on Election Day, and the election headquarters in northeast Ocala is not among them. He doesn’t think troublemakers would go to the trouble of visiting far-flung precincts.

“We just don’t have those types of locations where an Election Day disruption is systemic and everything comes crashing down,” Wilcox said.

Moreover, Wilcox said he expects Election Day turnout to be way down, relative to past elections. This year, most people who intend to vote will already have done so by mail or during early voting, which continues until Oct. 31.

But if agitators want to interfere, Wilcox has planned for them.

Armed security is not allowed inside precincts by law, Wilcox said, but Sheriff Billy Woods and Ocala police Chief Greg Graham will ensure help is close by.

“I’ve been doing this long enough that most people, at least for the organizers, know I won’t allow disruptions in a polling place. They (poll watchers) can sit down and watch all day long, and I’m good.”

Yet, “any disruption in any of my polling places will be dealt with swiftly,” he added.

Wilcox, however, has one more reason for believing things will go smoothly on Election Day.