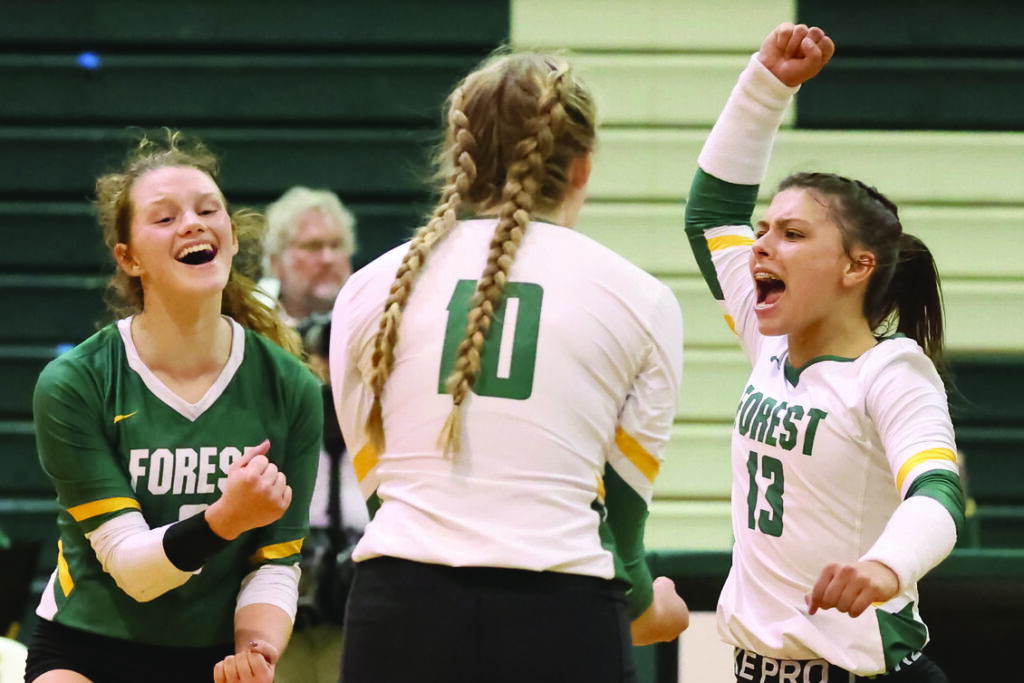 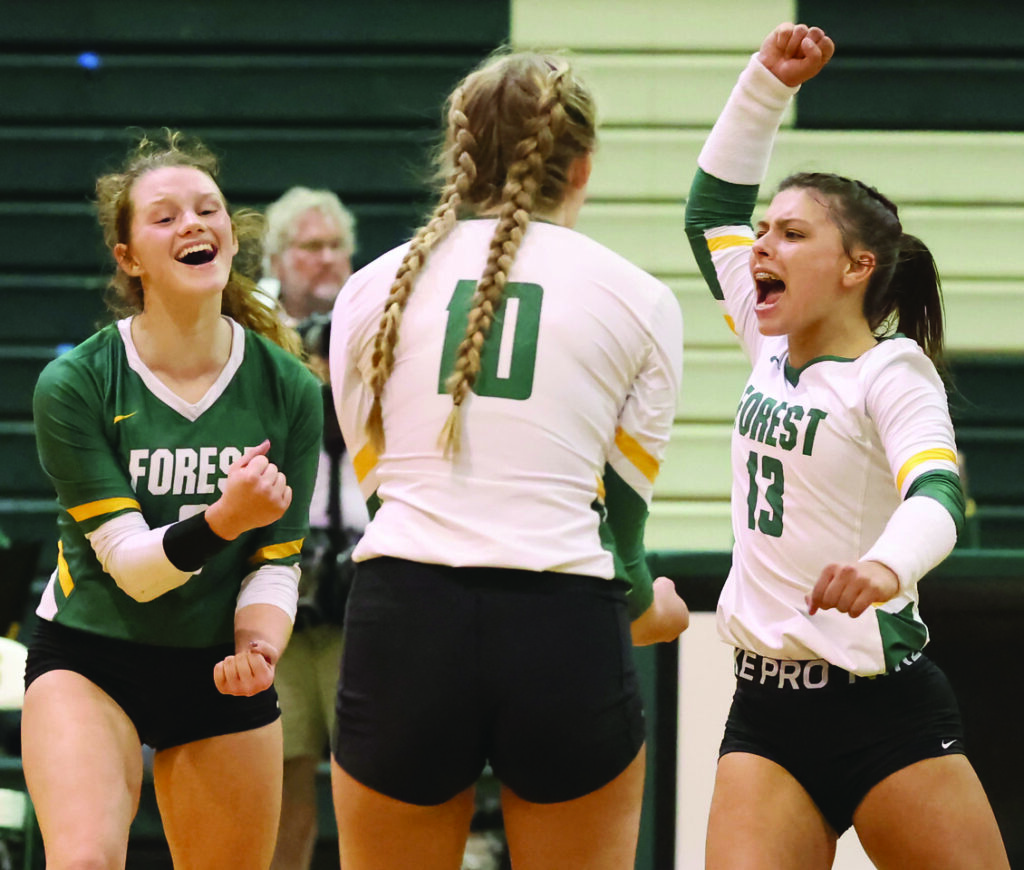 North Marion and Lake Weir, both of whom placed second in the district tournament, also play this week.

Meadowbrook’s offense was formidable with 47 kills on the night, with Delaney Baker (17 kills), Angel Ross (14 kills) and Nina Staub (12 kills) leading the way. But it was not enough to overcome St. John’s scrappy play.

St. John had 94 digs in the match, with Sara Reese contributing 34 and Sophia Ochoa another 23.

Ochoa also led the St. John offensive attack with 12 kills on the night.

Meadowbrook, having lost to St. John, placed second in districts, and also progressed forward to the State Tournament. The lady Mustangs traveled to Jacksonville to take on Christ’s Church Academy on Thursday.

For the district championship game, the lady Celtics faced off against Father Lopez. Trinity Catholic dominated 3-0, with set scores of 25-12, 25-9 and 25-21.

Leading the offensive attack throughout the season for the Celtics have been Kiana Laborde (211 kills), Chloe Teter (156 kills) and Amelia Fitzpatrick (138 kills).  Rounding out the TC assault are true freshman McKenna Yates with 232 digs and the strategic serving by Izabelle Sanchez with 24 aces.

The Celtics will have their work cut out for them in the regional quarterfinals, as their first opponent is Orangewood Christian, who has only one loss on the season, to Trinity Prep in the District Championship. The two squared off at TC on Thursday.

Following a bye in round one of the District Tournament, North Marion squared off against Citrus in round two. The lady colts toppled Citrus 3-0.

North Marion moved on to face Crystal River in the District Championship on Oct. 15.  The lady Colts suffered a frustrating defeat, 3 sets to 1.

“We suffered a difficult loss to Crystal River,” said Colts head coach Richard Guerrero. “Our defense was strong, but Crystal River was able to place the ball very well during the four-set game. In preparing for regionals, our team looks to prove that hard work, communication, and a love of the game can take you to the next level.”

With the loss, North Marion was awarded second place in the District Tournament.

North Marion traveled to Weeki Wachee to take on the lady Hornets on Thursday. Weeki Wachee, currently undefeated at 17-0, is be a big hurdle to clear for the North Marionv Colts.

Having rolled over the competition in the District Tournament, Vanguard was crowned district champions and earned home court advantage for round one of the State Tournament.

Playing in their home gym, the Knights took on Lake Minneola on Wednesday night and handled them with ease. With set scores of 25-11, 25-16 and 25-18, Vanguard moves on to the next round.

“Girls played great. Our offense was really aggressive and smart,” head coach Luis Perez said. “On the defensive side, our quickness allowed us to score a lot of points out of transition. Our blockers also came up big with lots of touches, slowing the ball down for our defense.”

At the forefront of Vanguard’s aggressive offense was Emma Ehmann with an astounding 20 kills on the night. Additional crucial contributors were Sophie Reed with seven kills, 27 assists, six aces, 18 serving points and 14 digs, and, Adyla Kerley with four kills, two aces, eight serving points and 12 digs.

Lake Weir, having received a bye in round one of the District Tournament, faced Vanguard in round 2. Vanguard thrashed Lake Weir 3-0. With its second-place finish, Lake moved on to the State Tournament.

Lake Weir traveled to Deltona on Oct. 21 to take on Pine Ridge but lost, ending its season.

Vanguard will face Pine Ridge at home at 7 p.m on Oct. 28. As Pine Ridge enters the match with a less-than-stellar record of 3-6 on the season, Vanguard should sweep them and move into the regional final.

In the first round of districts, Forest faced off against Buchholz. Forest lost set 2 before rallying to take sets 3 and 4 and the match.

For the district championship, Forest looked across the net at longtime adversary Gainesville.  The Wildcats shut out Gainesville 3-0, with set scores of 25-18, 25-19 and 25-23.

As the postseason progresses, so does the competition.

With home court advantage, Forest matched up against South Lake for the regional quarterfinal on Oct. 21. South Lake, also with a formidable record of 18-5, gave Forest some competition in the first set of the match before falling 25-22 to the Wildcats.

Forest hit its stride in the next two sets, besting South Lake with scores of 25-18 and 25-15, to take the match in straight sets.

Leading the charge for Forest was outside powerhouse hitter Emma Truluck with 17 kills on the night out of just 24 swings. Additional key players adding to the win were Emma Santi and Aubrey O’Cull with seven kills each.

The next opponent forced to walk the gauntlet and take on Forest is Gainesville. Forest beat Gainesville three sets to zero in the District Championship. The two square-off again Wednesday, Oct. 28.