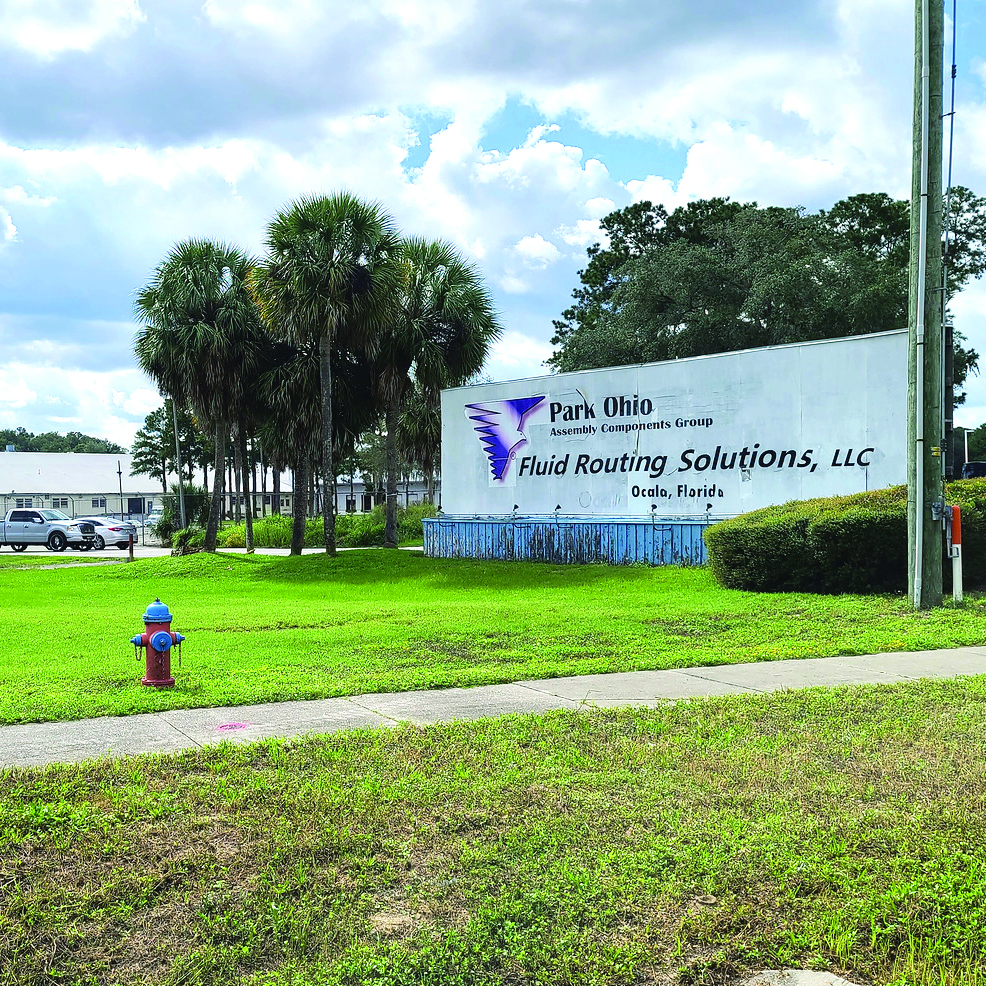 The Park Ohio Assembly Components Group Fluid Routing Solutions facility is shown on Southeast Maricamp Road in Ocala, Fla. on Monday, Oct. 12, 2020. The facility was finally cleared as environmentally safe by the DEP after an oil spill there 30 years ago. [Bruce Ackerman/Ocala Gazette] 2020. 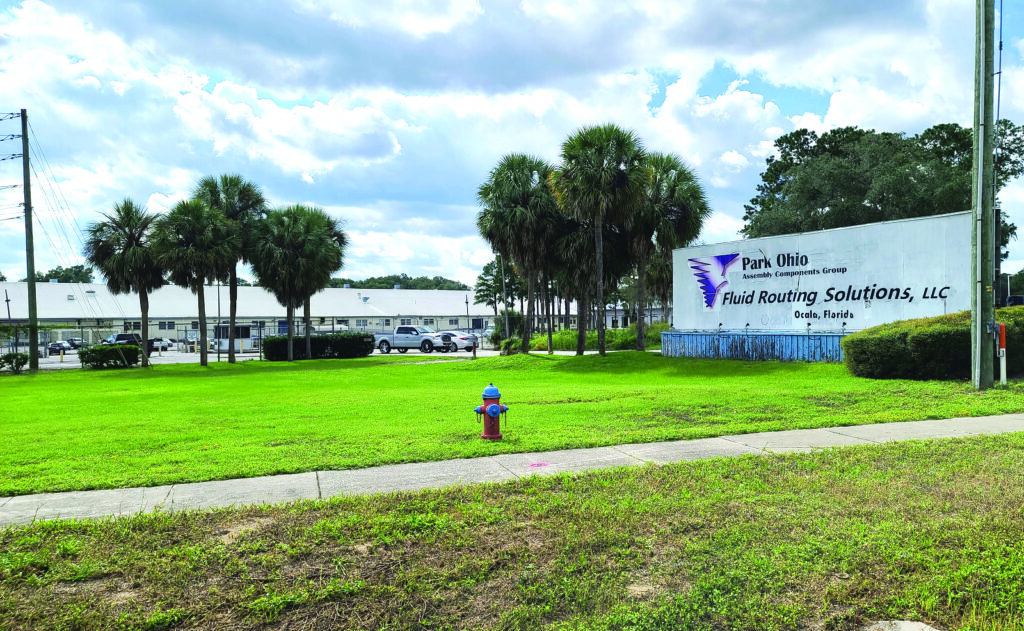 The Park Ohio Assembly Components Group Fluid Routing Solutions facility is shown on Southeast Maricamp Road in Ocala, Fla. on Monday, Oct. 12, 2020. The facility was finally cleared as environmentally safe by the DEP after an oil spill there 30 years ago.

In February 1988, the Winter Olympics were held in Canada, a federal grand jury indicted former Panamanian strongman Manuel Noriega on charges of drug running and racketeering, and Justice Anthony Kennedy took his seat on the U.S. Supreme Court.

Also that month, in Ocala, a local manufacturer experienced a significant environmental mishap – one characterizing an ongoing problem that city officials are stepping up efforts to correct in 2020.

Back in February 1988, 2,400 gallons of processed oil leaked from an underground storage tank at the Dayco Products plant along Maricamp Road. The contaminants eventually seeped onto a neighboring property.

Dayco, which made rubber industrial hoses, attempted to clean up the spill, and in April 1989, according to a Florida Department of Environmental Protection report, had worked with the state to develop a strategy to do that. But despite its efforts, the soil and groundwater at the 35-acre site retained toxins above allowable levels.

In March 1991 letter, three years after the incident, the state recognized Dayco’s “significant efforts” to get a handle on the nature of the residual pollution. Still, the letter stated, Dayco had not adequately identified the source of the remaining contamination, including its filtration into the Floridan aquifer, which supplies the drinking water to the region.

The site was declared a brownfield, and efforts to environmentally rehabilitate the property were established and monitored. They continued even after Dayco sold the site to Ohio-based Fluid Routing Solutions, or FRS, in 2007.

Then last month, more than 32 years after the original leak, the DEP signaled the all-clear.

In a Sept. 10 letter to an FRS executive, environmental regulators wrote that after reviewing its final clean-up report, submitted 18 months earlier, the company had “satisfied … rehabilitation requirements for the contaminated site,” and thus was “released from any further obligation to conduct site rehabilitation” on the property.

The DEP handed down some conditions to be met. For example, the company cannot drill any groundwater wells on the property. They also must obtain DEP approval before building or tinkering with any on-site stormwater controls. And DEP restricted what types of facilities can be built or established there.

“(I)t is the opinion of the Department that Fluid Routing Solutions, LLC has successfully and satisfactorily implemented the approved brownfield site rehabilitation completion agreement and, accordingly, no further action is required to assure that any land use identified in the brownfield site rehabilitation completion is consistent with existing and proposed uses.”

Representatives of FRS or its Cleveland-based parent company, ParkOhio, could not be reached for comment.

“The letter is only to let previously involved parties know that the site is now ‘clean,’ and there should be no environmental restrictions on operations or building expansions going forward,” City spokeswoman Ashely Dobbs said. “That does not mean they can do anything they want in terms of uses or building, nor does it mean there won’t be any further contamination issues. It only means issues from the 1988 spill are no longer a concern.”

“It is not unusual for a site to take 30 years or longer before a closure letter is issued,” DEP spokeswoman Ashley Gardner said. “Each site is unique in regard to contamination and geology.”

Christian Wells, an anthropology professor at the University of South Florida who studies redevelopment of brownfields, agreed on the timing.

“Regarding the 30-year cleanup, the answer is surprisingly no, it is not all that unusual it takes so long, because the cleanup process took place through ‘natural attenuation’ – a combination of natural physical, chemical, and/or biological processes that reduce the concentration of contaminants in the soil,” Wells said.

He likened that process to an aquifer filtering water to clean it.

“Because there is no human intervention in this process, just monitoring, it can take many years,” Wells added. “One could speed up the process by, for example, removing the soil altogether, but that can be incredibly expensive and you still end up with contaminated soil that has to be stored somewhere.”

Wells, who also evaluates brownfield cleanup projects as a DEP contractor, described Florida as “OK” in rehabilitating contaminated sites, relative to other states.

He noted Florida is rife with brownfields, spanning hundreds of thousands of acres, mostly along the Interstate 4 corridor and around Miami and Jacksonville. Additionally, phosphate mines, old and new, which stem from commercial and industrial development dating to the 1960s, also produce hazardous wastes.

“Sadly, the vast majority of these properties are located in underserved communities of color, who have little leverage for cleaning them up and so they suffer the greatest health burdens,” said Wells.

But, “the DEP has several programs — funded by the state and by the U.S. Environmental Protection Agency — that governments, nonprofits, and businesses can use to help assess and clean up any contamination and then redevelop the property.”

Since then, the program has helped revive 137 contaminated sites, create 66,600 direct and indirect jobs, and generate $2.86 billion in capital investment in designated brownfields, the DEP noted in 2019 in its annual report on the brownfields initiative.

For example, one DEP initiative is the Voluntary Cleanup Tax Credit program, through which companies can claim state breaks for rehabilitation costs.

FRS participates in this initiative, and according to DEP records, received $967,173 in tax credits for clean-up actions between 2009 and 2019. The amount the company received for 2020 is not yet known.

The city of Ocala has tapped similar programs to decontaminate and repurpose local brownfields – and is moving forward with a new initiative.

In addition, the city is utilizing EPA and DEP funding to remove soil at the former Royal Oak charcoal plant in northwest Ocala. Dobbs said the area is being decontaminated to make room for a new affordable housing project.

Much of this effort has been funded by $300,000 the city received from the EPA’s Brownfields Program, said Dobbs. The funding could be used citywide, yet the focus will be on west Ocala.

Under that grant, she said, the city will send out postcards next week to property owners in west Ocala.

The city seeks to inform residents that they could be eligible for the Brownfield Assessment Grant Program, if they can answer yes to whether they know of a site that could be contaminated, or if their property is vacant or is hard to sell because of “real or perceived” contamination.

Meanwhile, Dobbs added, the city is applying for another EPA brownfield assessment grant this month.

“The west Ocala area was prioritized in the 2018 EPA grant application because residents in this part of the city have been most negatively impacted by brownfields,” Dobbs said. “The focus and prioritization is intended to further what is known as environmental justice.”

The redevelopment of brownfields, she said, “positively contributes” to the city’s strategic goals.

“Eliminating real or perceived contamination allows a property to be more readily redeveloped and returned to active use. Properties ready for redevelopment contribute to a more vibrant community,” said Dobbs.