Who wears the pants at OCT?

“Into the Breeches” makes her story with a heartwarming, all-female production-within-a-production that theater diehards will surely enjoy. 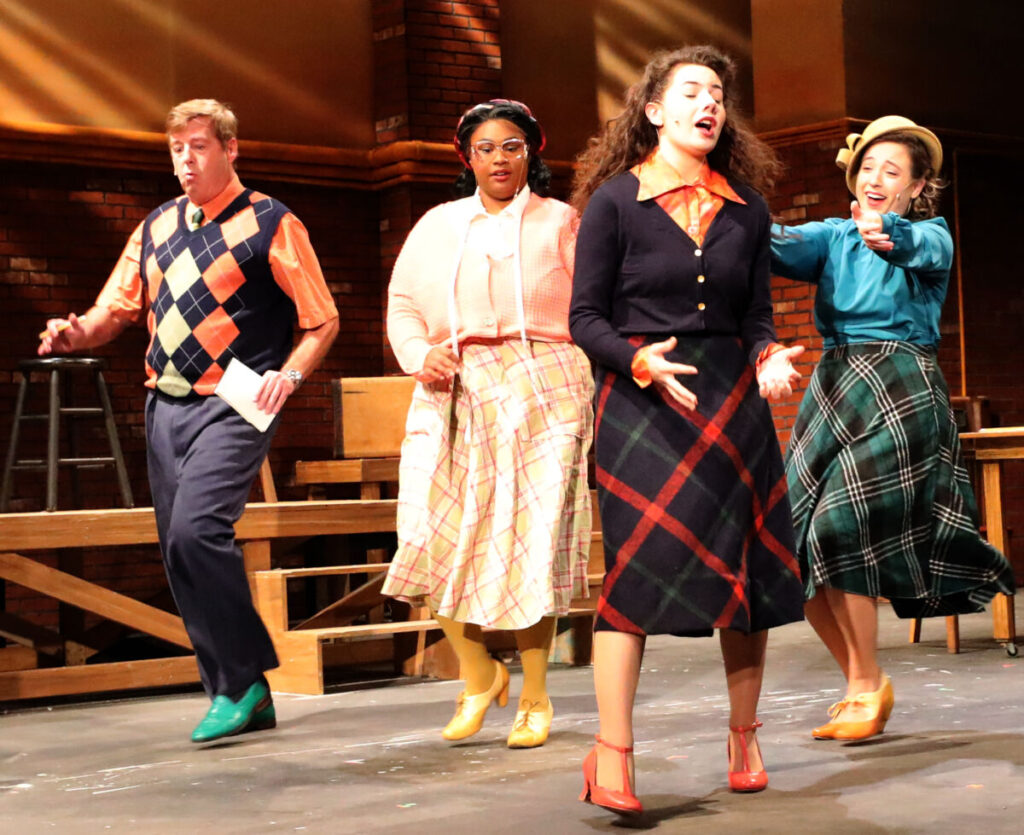 From left: Jim Bain as Stuart Lasker, Claudia Durrett-Cook as Ida Green, Madison Raabe as Grace Richards and Kiersten Farley as Maggie Dalton, rehearse a scene from Into The Breeches! at the Ocala Civic Theatre in Ocala, Fla. on Monday, Jan. 16, 2023. The play runs from January 19 thru February 5, 2023 at the theatre. [Bruce Ackerman/Ocala Gazette] 2023.

Following in the wartime-women-take-charge milieu of Rosie the Riveter and “A League of Their Own,” “Into the Breeches transports us back to Ocala circa 1942 during World War II when the town’s male thespians are away at war.

In the play, the director’s wife takes it upon herself to stage the season opener—the Henriad, aka William Shakespeare’s “Henry IV pt. 1,” “Henry IV pt. 2,” and “Henry V”—featuring an all-female cast.

Directed by Terry LeCompte, the thought-provoking dramedy takes over the Ocala Civic Theatre stage Thursdays through Sundays from Jan. 19 through Feb. 5.

The title is a twist on that famous line from “Henry V:” “Once more unto the breach, dear friends …” but instead of a battlefield, the women must put some breeches (britches in these parts) and must overcome discrimination, derision, their own self-doubts and the trauma of not knowing when or if their husbands will return safe and sound.

The idea for “Into the Breeches” came to playwright George Brant during a 2014 boycott against the Belasco Theater in New York City, which featured all-male casts performing Shakespeare’s “Twelfth Night” and “Richard III.” Brant felt it was unfair to go back to the all-male casts of yore when women are still too often outnumbered in Shakespeare productions.

“I think it’s a valid complaint on the part of women that Shakespeare is the most produced playwright, still, in the country and women still have the least access to those plays,” Brant told The Daily Chautauquan. “It just seemed a little cruel to take away the few roles that are there … and to assign them to men.”

In the play, Maggie Dalton, impeccably portrayed by Kiersten Farley, takes directing tips from her husband while overseas through his letters. She invites Celeste Fielding (Roe Agnese), the Oberon troupe’s beloved diva to star in the production, bowing to her palatial ego as if Celeste were a queen without a throne.

Things get murky when Ellsworth Snow (Richard Behrendt), the theater’s conservative board president, says no to the idea, but the ever-resourceful Maggie gets to him through his wife, Winifred (Danuta Jacob), a talentless but willing socialite whom she gets to join the cast.

Some of the more amusing, provocative and interesting parts of the play come to us via the dependable stage manager Stuart Lasker (Jim Bain) and costume designer Ida Green, played exquisitely by Claudia Durrett-Cook. Stuart’s reason for not being deployed becomes a cause for concern that ultimately, once out in the open, becomes another source for empowerment. Ida, a promising Black visionary, takes up the torch to show everyone, despite pay squabbles and other worries, the overall importance of the production and all of the talent it includes. 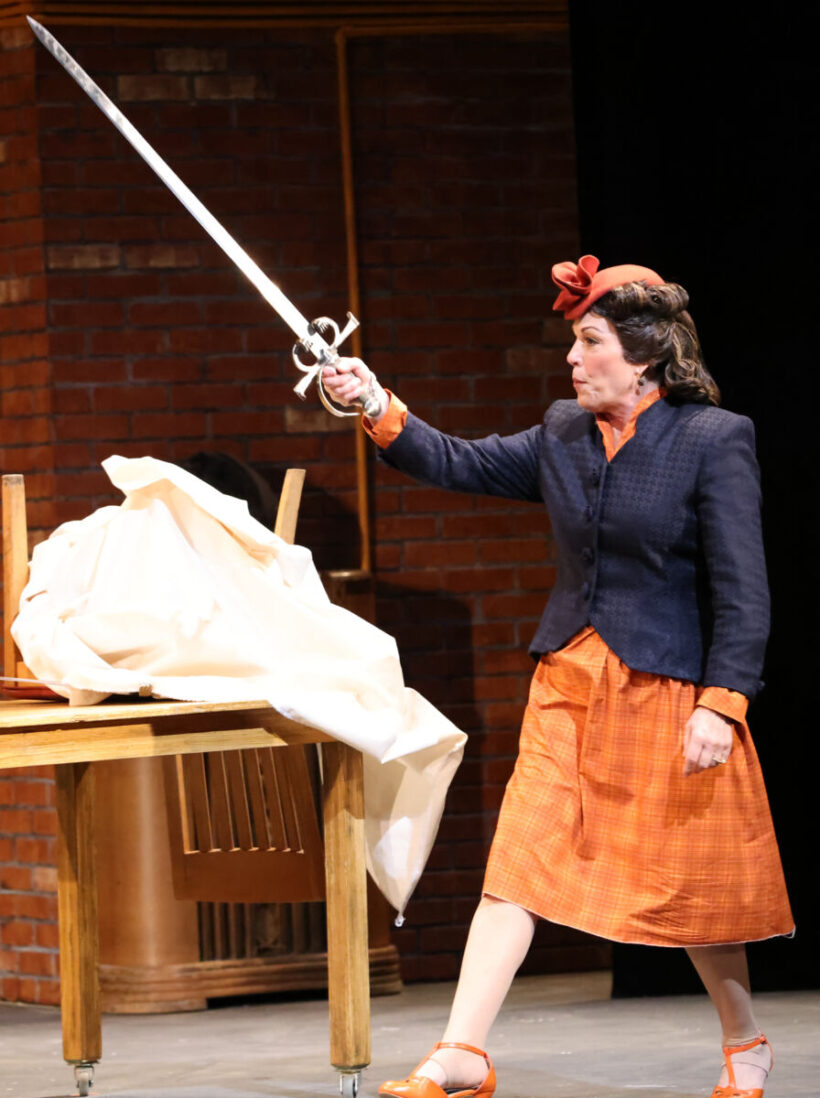 Roe Agnese as Celeste Fielding rehearses a scene from Into The Breeches! at the Ocala Civic Theatre in Ocala, Fla. on Monday, Jan. 16, 2023. The play runs from January 19 thru February 5, 2023 at the theatre. [Bruce Ackerman/Ocala Gazette] 2023.

As for the OCT production, the cast is the thing here. A tankful of spirit, cleverness and spunk trucks through this show. The only drawback is its slow start (the auditions take a little bit too much of the plot) but hopefully the quick wit and energy of this crack bunch push us through to the second act when things get really good.

Shadowy effects of light coming through windows in an empty theater are executed brilliantly by Lighting Designer Will Elphingstone. Costume Designer Genevieve McCormick likewise does an excellent job of bringing back the lovely couture of the 1940s.

Besides gifting us with a thoughtful script about women and their potential to play Shakespeare roles as good as their male counterparts, Brant delivers a love letter to the theater life. A lot of “Into the Breeches” is inside-baseball for theater lovers, usually a huge contingent of audiences. The play gives us a nudge and a wink about the egos, hassles and arduous labor of love that go into making sure that show indeed goes on.

Our heroine Maggie’s sense of responsibility and her attempts to care for, respect, and understand the people in her theater community, according to director LeCompte’s director notes, build and reinforce the ties that bind us and make a community a better place and a place of belonging.

“The war is already won through the genesis of esprit de corps — the pride, fellowship, and loyalty in Maggie’s communities. As William Shakespeare said in “Henry V,” “We few, we happy few, we band of brothers.”

Or, in this case, sisters, too.