Ryan Neumann is busy these days, boldly going where few Ocala artists have gone before. 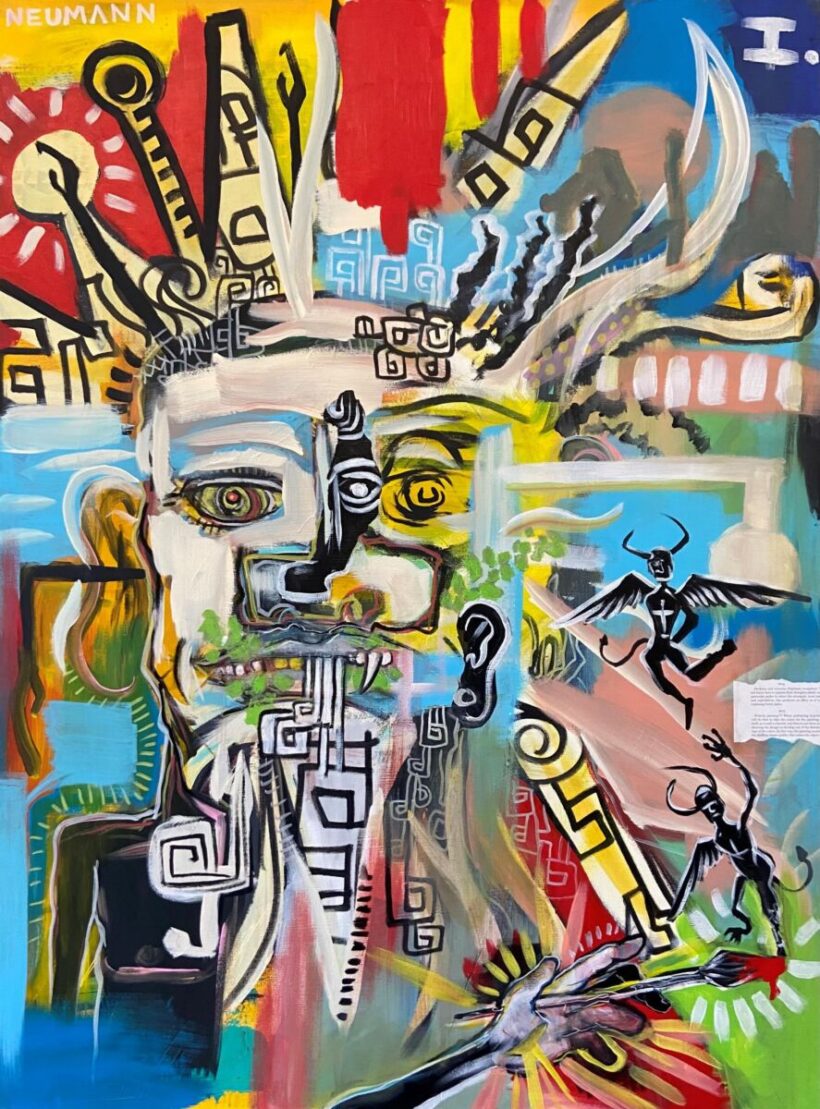 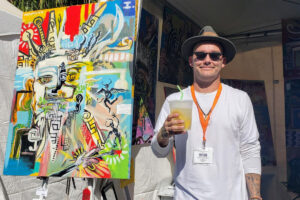 Imagine a younger, kinder but just-as-mischievous Jack Nicholson-esque American male with tattoo sleeves and a welcoming smile — this somewhat approximates local artist Ryan Neumann, who moved here from Fort Lauderdale around 14 years ago.

Neumann and his wife, Kat, have been active in the arts and culture community of Ocala, bringing a more stylish and cutting-edge sensibility to the evolving midsize metro.

He placed second in the 2021 Student and Emerging Artist Exhibition, pouring his almost decade-long experience into his painting “Passion, Pain & Demon Slayin’.” ($700)

“Masks have been used in cultures for thousands of years in transformational ceremonies and healing practices,” he said. “To me, the broad spectrum of creativity includes the marginalized ancient cultures on the edges who used art and creative expression to drive away demons and liberate spirits.”

Neumann stays plugged into the scene as a resident artist of MAX, located in the Union Station near Tuscawilla Park Historic District. The organization started as an informal collective of friends and has evolved into an inclusive, creatively unbridled, artist-championing organization, touted as an “arts incubator.”

He works around the clock with other MAX artists to provide a change of pace from the horses and landscapes grazing local shops and galleries.

In stark contrast, Neumann’s works incorporate a broad array of cultural influences. They make a bold statement and elicit a Big Bang emergence of ideas and figures like those waking dreams you have while drifting off to sleep. Hallucinatory, psychedelic and merging a wide range of complementary colors and imaginary, Neumann’s paintings have been known to feature the odd mythological creature, such as a  blind cyclops monster.

Neumann and his cohorts at The MAX are spawning local talent as an art incubator, and the space features six partitioned studio spaces, two large open studio and classroom areas.

He’s a featured artist in Couch Sessions this summer, on June 3 an intimate, lounge-y kind of Ocala arts fundraiser.

Before that, Neumann will be participating in two major MAX events:

On May 7, the painter joins artists Jade Amber, Drake Arnold, Justin Alsedek and other locals in the Battle of the Brushes at 8th Ave. Gallery. The live painting starts at 2 p.m., and the event will last around nine hours. Other artists featured include Teddy Sykes, Mel Fiorentino, Chris Hershberger, Jordan Shapot and Andrew Raymond.

The event will feature live music Glizzy Gillespie from 2 to 3:30 p.m.; Sam Carlson and his Borderline Brothers from 4 to 7 p.m. and Just Joel from 8 to 11 p.m. Infinite Ale Brewery beer, wine and other non-alcoholic beverages will be available, sponsored by the David and Lisa Midgett Foundation. Proceeds from all merch sales will benefit the Marion Cultural Alliance (MCA) and the Magnolia Art Xchange (MAX).

Then there’s the annual “Art Heist,” a fundraising event/game that allows donors a chance to win or “steal” an original piece of art on May 13 at the Magnolia Art Xchange. Think of it as a “Dirty Santa” of sorts. Those lucky enough to purchase a winning ticket can choose from a selection of original artwork created by locals. If someone happens to select the artwork you wanted before your chance, you can “steal” it for a price. MAX has also added a little mystery, they say, and one hidden artwork that will be up for grabs and won’t be unveiled until the end of the game.

The money raised at the event will support MAX’s “continued efforts to further the creativity and professionalism of local artists as a collaborative resource hub for artists, educators, and art enthusiasts.”