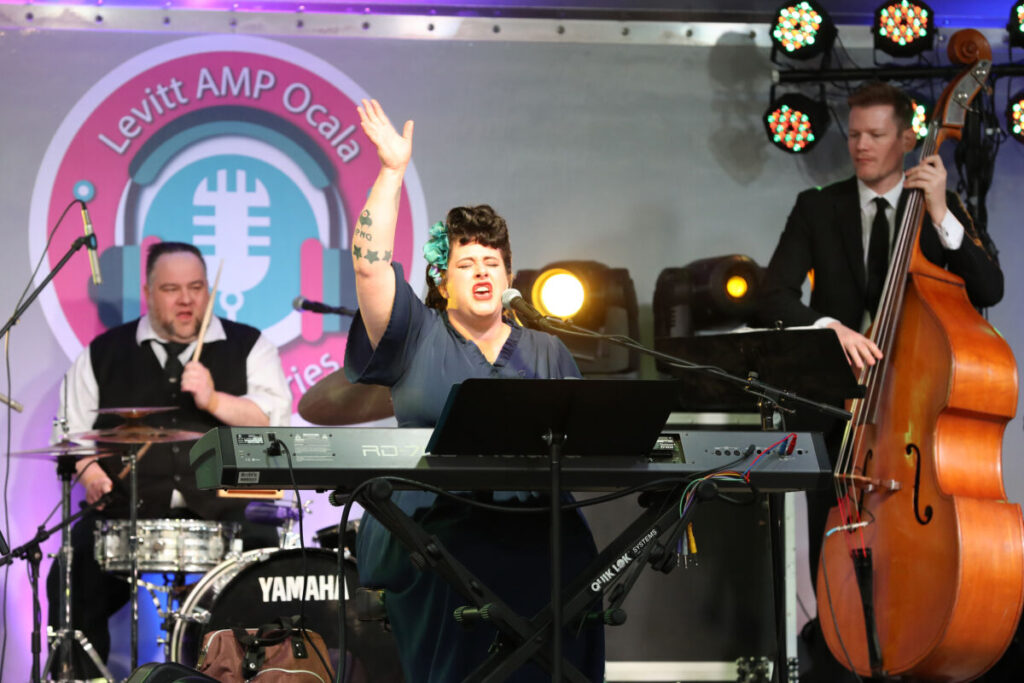 Davina and the Vagabonds perform during the kickoff of the Levitt AMP Music Series at the Martin Luther King Recreational Complex in Ocala on April 22. [Bruce Ackerman/Ocala Gazette] 2022.

Presented by the Marion Cultural Alliance, Inc. in a joint partnership with the City of Ocala, the 2022 schedule of headlining and opening acts is as follows:

• May 6—Indigenous (Sheba the Mississippi Queen)

Indigenous is a Native American blues-rock group consisting of three brothers. The group released its debut album, Things We Do, in 1998 and has won acclaim from such artists as Bonnie Raitt, the Indigo Girls and Jackson Browne.

• May 13—The Byrne Brothers (Scott Jackson)

The Byrne Brothers are a traditional Irish family band from Donegal who moved to Florida in 2018 after receiving their US permanent residency for “Extraordinary ability in the arts.” The brothers are Luca, 15, on accordion; Finn, 13, on banjo; Dempsey, 10, on Bodhrán and tin whistle; and Tommy, the dad, on guitar. Scott Jackson is an award-winning singer-songwriter, dentist, Navy veteran and family man.

• May 20—The Drifters (Billy Buchanan)

The Drifters, featuring Rick Sheppard, perform the hits that they have become known for, while also singing hits from the 1970s and 1980s done up in the unique Drifters style. Billy Buchanan is a dynamic entertainer, known as the “Ambassador of Rock ‘n’ Soul. He will have you swinging and swaying through the decades, from the 1950s to the 1980s and beyond.

Reggae Force is one of today’s premier reggae music bands, featuring an all-star cast of musicians including Junior Jazz on vocals/guitar, Aston Barrett Jr. on drums, Peter Williamson on keyboards and Alaina Reed on bass. Nostaljah is a Reggae/R&B band formed in late 2015.

Bette Smith is a wild rock & soul singer who traces elements of her life-affirming new album, The Good, The Bad & The Bette, to her childhood in Brooklyn, NY. Musically, it connects to the gospel music she heard in church and the soul music on the corners. Her albums have received praise from NPR, Paste, American Songwriter, Billboard, MOJO and The New York Times.

Regarded as “the Tina Turner of Guinea,” Natu Camara is an impassioned singer-songwriter who blends afro-rock, pop and soul and can sing in five different languages. Founded in 2021, UF’S African Popular Music Ensemble specializes in the popular music of the African continent, with a special focus on Afrobeat, highlife, soukous and African Jazz.

Led by freewheeling frontman Miles Nielsen, The Rusted Hearts have been wowing audiences for years with the diversity of their sound, the tightness of their four-part harmonies and the quality of their song craft. The Ocala Symphony Orchestra, led by conductor Matthew Wardell, is one of Marion County’s premier performing arts organizations since 1975.

All shows run from 7 p.m. to 9 p.m. There will be no concert on May 27. If inclement weather were to occur, the concert series would move indoors to the E.D. Croskey Recreation Center located at 1510 N.W. 4th St. in Ocala.

All artist descriptions above in italics were found on the Levitt AMP Music Series website.