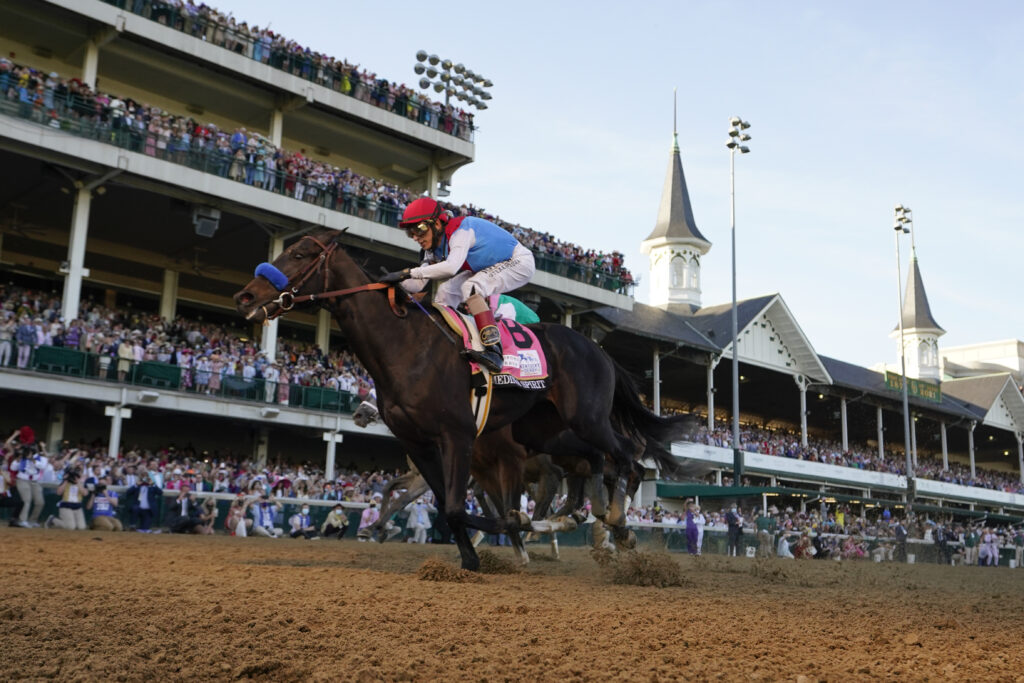 The Florida Thoroughbred Breeders’ and Owners’ Association (FTBOA) board of directors held their awards gala on April 25.

During the gala they named Medina Spirit was named the 2021 Florida-bred Horse of the Year. Medina Spirit was bred in Florida by Gail Rice, who was honored with her second consecutive Needles Award as the Association’s small breeder of the year.

Medina Spirit was disqualified after winning the Kentucky Derby by the track stewards after a post-race test showed evidence of the banned substance Betamethasone. The ruling has been challenged in court by Medina Spirit’s trainer Bob Baffert for Amr Zedan’s Zedan Racing Stables Inc.

Mongolian Changa was also named the FTBOA Broodmare of the Year in a vote by the board.

The most decorated female of the night was Shifty She, who was named the Florida-bred Champion Turf Female and Champion Older Female. During the year, Shifty She won the Noble Damsel at Belmont Park and the $75,000 Powder Break and $75,000 Ginger Punch, both at Gulfstream Park.

Shifty She is owned by Chris Pallas and Harvey Rothenberg in the name of their Pedigree Partners LLC and was bred by Pallas in partnership with George Klein.

Shifty She is by Gone Astray out of Perilous Hope, by Strong Hope and is trained by Saffie Joseph Jr., who also took home the trophy as the Leading Trainer of Florida-breds by stakes wins at Florida tracks with seven.

Pappacap, a homebred for George and Karen Russell’s Rustlewood Farm Inc., was named the Florida-bred Champion 2-Year-Old Colt based on his victory in the Grade 2 Best Pal at Del Mar. He was also second in the TVG Breeders’ Cup Juvenile presented by TAA (G1) at Del Mar and second in the American Pharoah (G1) at Santa Anita.

Trained by Mark Casse, Pappacap is by Gun Runner out of Pappascat, by Scat Daddy.

Outfoxed is owned by Larry, Nanci and Jaime Roth’s LNJ Foxwoods and was bred by Charles and Susan Chu under the banner of their Baoma Corp. She is by Valiant Minister out of Savingtime, by Kantharos.

Livingmybestlife was named the year’s Florida-bred Champion 3-Year-old Filly. Her stakes résumé from 2021 included the $75,000 Lucky Spell at Los Alamitos and the $103,750 Seashell at Del Mar.

Livingmybestlife is owned by Hronis Racing LLC and was bred by Alex and JoAnn Lieblong. She is by The Big Beast out of Wall Street Lady, by Speightstown and is trained by John Sadler.

Sound Machine was named the Florida-bred Champion Female Sprinter for 2021 having won the $75,000 Musical Romance at Gulfstream Park.

For the second consecutive year, Journeyman Stud stallion Khozan was the Stallion of Year for Florida. With progeny earnings of $3,671,794 in 2021 Khozan was represented by 78 winners from 123 (63%) including Florida-bred Grade 3 Longacres Mile-winner Background, Grey Goose Turf Classic-winning Florida-bred Me and Mr. C and three other graded stakes-placed winners. His leading earner in 2021 was stakes-placed Don’t Get Khozy, who earned $211,372.

The leading freshman sire in Florida during the year was Neolithic, who stands at Pleasant Acres Stallions. Neolithic had progeny earnings of $636,849 and was represented by six winners from 14 starters including Florida-bred stakes-winners Make It Big and Cattin.

The Sunshine State’s leading juvenile sire for 2021 was Arindel’s Brethren who had eight juvenile winners from 21 2-year-old starters who earned $809,444. His top money earner was multiple stakes-winning Florida-bred Octane who racked up $401,000 while winning three of four starts; and stakes-placed winner Clapton. This is the second year Brethren was the leading juvenile sire in Florida having also held the title in 2019.

Francis and Barbara Vanlangendonck’s Summerfield were presented with their third Joseph M. O’Farrell Memorial Award as the original consignors of the year’s best Florida-bred racehorse once offered at an Ocala Breeders’ Sales auction. Summerfield consigned Medina Spirit to the 2019 OBS Winter Mixed Sale.

Carlos A. David was presented the trophy as the Leading Florida Trainer of Florida-breds by earnings with $2,217,185 on the year including two-time FTBOA Florida Sire Stakes-winner Octane.

For the fourteenth time, Kathleen O’Connell was the Leading Florida Trainer of Florida-breds by wins with 56 victories during 2021.