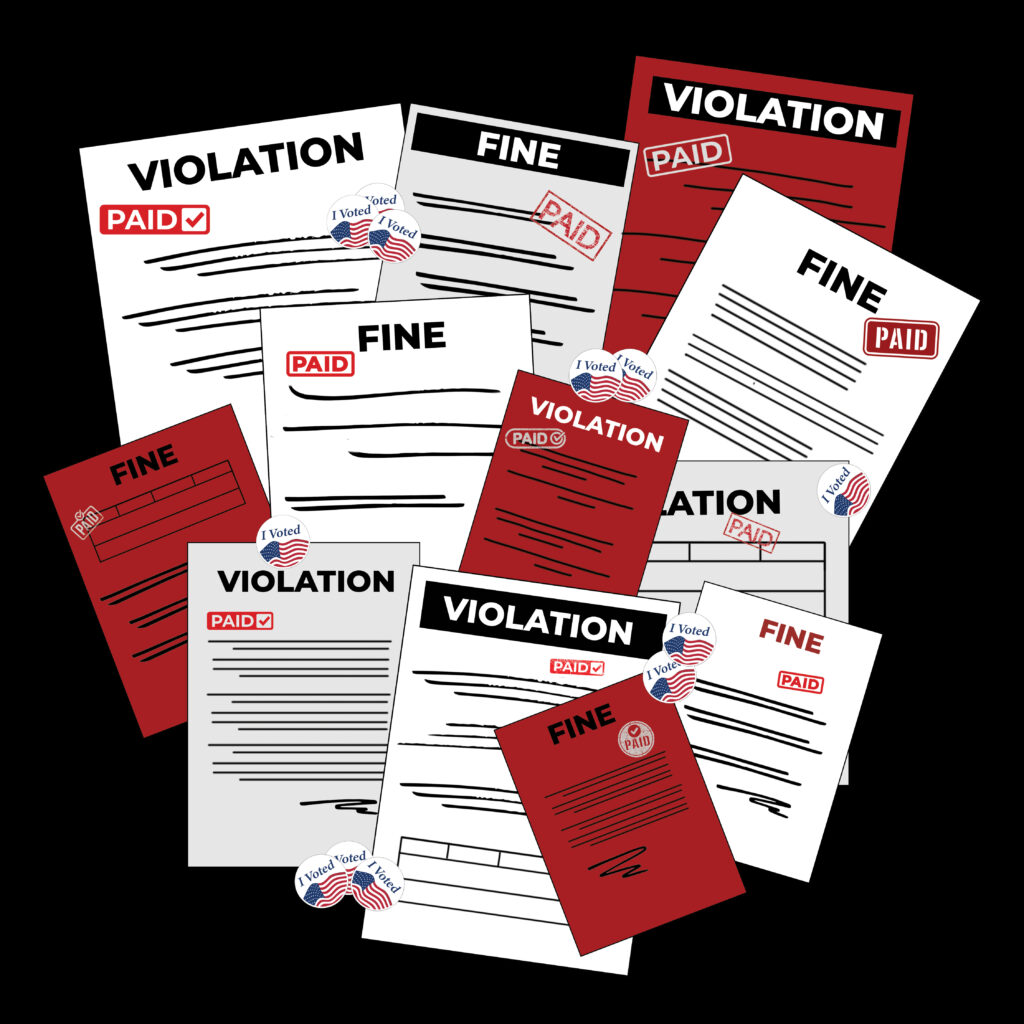 Desmond Meade was incorrectly identified in the original version. His name has been corrected.

An Orlando-based group has paid tens of thousands of dollars to settle outstanding court costs owed by convicted felons in Marion County to help them regain their voting rights.

Since Aug. 11, according to county court officials, the Florida Rights Restoration Coalition, or FRRC, has paid $46,491 to cover lingering court costs tied to sentences for 38 convicted felons in Marion County.

The bulk of that money – $43,093 – arrived on Tuesday, officials said. FRRC is expected to pay another $23,000 in coming days to square the accounts of three dozen additional felons.

And the group has signaled that it may pay $48,028 more to help another dozen former convicts.

But Florida Attorney General Ashley Moody has asked state law enforcement to determine whether such payments are part of a potential vote-buying scheme to benefit Democratic nominee Joe Biden in November.

At the direction of Gov. Ron DeSantis, Moody last week requested a probe by the Florida Department of Law Enforcement. That came after The Washington Post reported that former New York Mayor and presidential candidate Michael Bloomberg had raised $16 million to help 32,000 former convicts in Florida regain their right to vote. The article indicated Bloomberg was targeting blacks and Hispanics.

Under Florida law, it is illegal for someone to “give or promise anything of value” in exchange for votes.

Citing a memo by Bloomberg, the Post noted that the billionaire “saw the donations as a more cost-effective way of adding votes to the Democratic column than investing money to persuade voters who already have the right to vote.”

Quoting the memo directly, the Post added, “The data shows that in Florida, Black voters are a unique universe unlike any other voting bloc, where the Democratic support tends to be 90%-95%.”

In response, the FRRC’s founder, Desmond Meade, now suggests Bloomberg’s statements could be a setback. Meade said Bloomberg introduced anti-Trump politics into an effort that only seeks to help “returning citizens” participate more fully in our electoral system.

Meade denies that his group is working to help only Democrats in a contentious election year in a critical battleground state.

Meade told the Post last week that the FRRC’s intention is to aid “people from all walks of life, from all sort of politics.”

Two days after the Post’s article, Meade issued a statement reiterating the group’s intention to serve all comers.

“We are committed to making sure our efforts to help returning citizens in Florida become full members of society are not infected by partisan politics,” Meade said. “At the core of our mission and our Fines and Fees Program is the belief that all returning citizens – from all walks of life and political persuasions – should have access to our Democracy, if they choose.”

“We have been openly, honestly and legally working with local clerks to clear fines and fees for returning citizens since 2019,” the statement continued. “That includes payments to clerks’ offices in the vast majority of Florida’s 67 counties. We will continue to make decisions that center on the lives of returning citizens and do the work of building a more inclusive democracy in Florida.”

In an interview with the Ocala Gazette on Tuesday, Meade seemed to welcome Bloomberg’s effort, like those of 80,000 other FRRC donors, to integrate former felons back into civil society, especially through voting.

Yet he also seemed to lament the former New York City’s mayor’s interjection of politics into the cause.

“At the end of the day, any politics is hurtful because it distracts from the positive work that’s going on,” said Meade.

“Amendment 4 brought people together. You didn’t see any attack ads (in 2018). People voted out of love,” he added. “Partisan politics takes away from the real work people are doing on the ground.”

The controversy is driven by the passage of Amendment 4, a state constitutional change supported by 65 percent of voters in 2018.

The amendment’s language authorized former felons, except those convicted of murder or sex crimes, to regain their right to vote “upon completion of all terms of sentence including parole or probation.”

The amendment took effect in January 2019. Advocates for felons, such as FRRC, the driving force behind Amendment 4, believed the restoration of voting rights for an estimated 1.4 million felons was supposed to happen automatically at that time.

Yet later in 2019 Republicans in the Legislature pushed through a measure outlining how Amendment 4 was to be implemented. That law declared a felon’s sentence included fully paying all fines, fees and restitution costs.

A legal battle ensued between the state and felons’ advocates.

Last October a federal judge in Tallahassee ruled that parts of the law were unconstitutional, supporting activists’ claims that the new statute created a “poll tax.”

The state appealed, and in mid-September a federal appellate court overturned the ruling.

“There is no evidence that any kind of animus toward indigent felons motivated Florida voters and legislators to condition reenfranchisement on the completion of all terms of sentence,” the majority’s opinion said. “After all, the voters of Florida made it easier for the vast majority of felons – who are disproportionately indigent – to regain their voting rights.”

“Florida’s voters intended only to reenfranchise felons who have been fully rehabilitated, and Senate Bill 7066 (the law implementing Amendment 4) drew a rational line in pursuit of that goal,” the opinion continued. “Court fees and costs imposed in a criminal sentence … are part of the State’s punishment for a crime. They are not taxes.”

The FRRC’s Meade said felons generally initiate the process by reaching out to FRRC through the group’s website or by calling. The FRRC then vets them to ensure they meet the criteria of Amendment 4.

Once that is satisfied, Meade said, the FRRC seeks to “maximize” the impact of its aid by looking at what people owe. Typically, he added, the group set a ceiling of about $1,000 per felon. But as contributions have risen, the ceiling has as well, now to about $1,500.

When asked if FRRC told or encouraged the felons how to vote, Meade gave an emphatic, “Hell no.”

“When we do our education work, it’s to benefit returning citizens – on both sides of the aisle,” he said. “At the end of the day, we don’t care how somebody votes, but that they have the opportunity to vote.”

Greg Harrell, general counsel to Marion County Clerk of the Court David Ellspermann, and the clerk-elect who will succeed Ellspermann in January, said that the American Civil Liberties Union and the FRRC began inquiring months ago about the names of convicted felons and amounts owed.

Then in mid-August, the correspondence got more specific.

Twice in August and then again on Sept. 18 and on Tuesday, the FRRC sent letters with enclosed checks to cover the outstanding costs for former felons, Harrell said.

“I don’t know if it’s tied directly to the presidential election, but you don’t have to stretch the imagination too far. Everybody knows what a battleground state Florida is,” said Harrell.

Harrell said his office has identified about 25,000 cases with outstanding debts. He noted that a single defendant may have more than one case. The total amount owed was not readily available. But, Harrell added, “We’re definitely talking about a lot of money because felonies, by their nature, are going to have more significant fines than misdemeanors.”

These payments go almost exclusively to the state to offset the cost of running the court system.

Meade described that as one of the major benefits of his program.

“You can’t script a better scenario. I’m personally excited by all that.”

While the letters come from the FRRC, the checks are cut by Tides Advocacy, which backed FRRC’s bid to pass Amendment 4 in 2018.

On its website, the FRRC says it is “dedicated to ending the disenfranchisement and discrimination against people with convictions, and creating a more comprehensive and humane reentry system that will enhance successful reentry, reduce recidivism, and increase public safety.”

But according to the Center for Responsive Politics, a Washington-based nonprofit that tracks federal campaign fundraising and spending, from 2012 to 2020 those affiliated with Tides Advocacy gave $1.8 million to federal candidates – all of it to Democrats, including Joe Biden this year.

Tides Advocacy on its website bills itself as “a team of political, legal and financial experts that identify, connect, and fuel movements for social justice and the health of our democracy.”

But Hayden Ludwig, an investigative researcher with the Capital Research Center, a conservative think tank in Washington, says there is more to it.

He said Tides Advocacy is an “arm” of the larger Tides Foundation, whose original benefactors include billionaire George Soros, who has also given to the FRRC.

Tides Advocacy now declares its independence from the Tides Foundation.

But Ludwig said his group traced $20 million flowing from the foundation to its appendage between 2010 and 2018.

“FRRC is a project of Tides (Advocacy), which means it’s just a front for Tides,” Ludwig said in an email.

Collectively, he added, the Tides Foundation and its affiliates form “a gigantic network of left-wing nonprofits that provide a collective service to the professional Left by passing through money from major foundations to activists groups and sponsoring the creation of new activist groups,” such as the FRRC.

Ludwig said Bloomberg does not seem to be a major donor to Tides. But there is no doubt they share the same political goal.

“In my experience, the Left has dozens and dozens of ‘nonpartisan’ groups that do nothing but try to get likely Democratic voters registered and mobilized ahead of elections – this is nothing different,” he said. “It’s part of a larger strategy by the Left to use IRS rules to engage in voter registration to supplement (emphasis original) the Democratic Party’s own GOTV (get out the vote) activity in elections.”