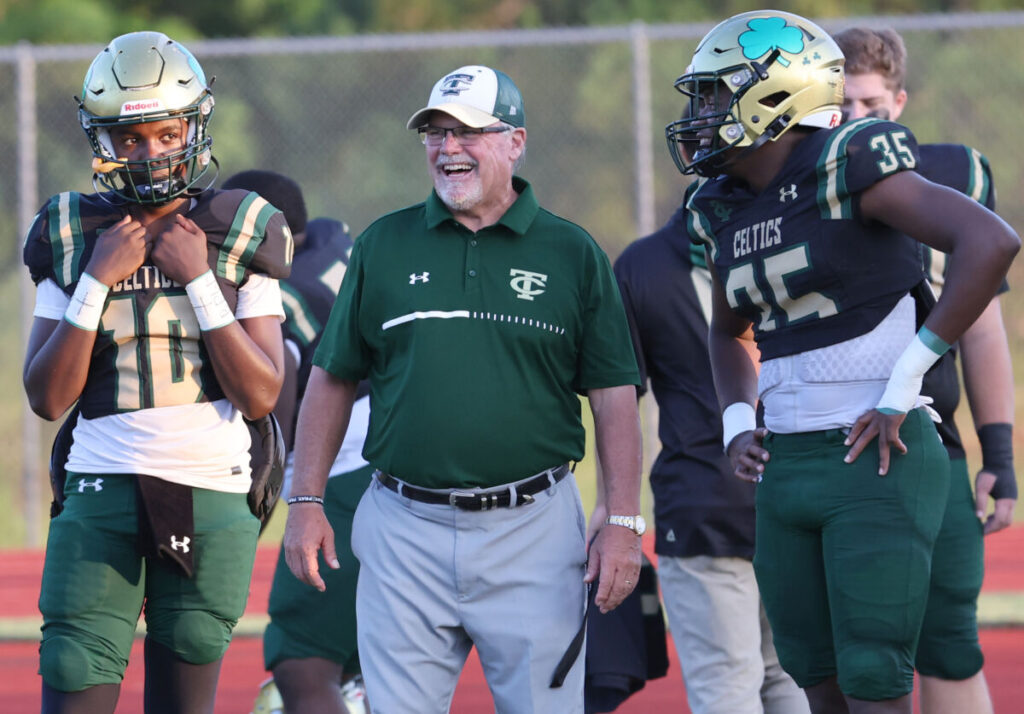 Trinity Catholic’s head coach, John Brantley, laughs with his player before their game against Raines during a football game at Trinity Catholic High School in Ocala, Fla. on Friday, Sept. 23, 2022. [Bruce Ackerman/Ocala Gazette] 2022.

The Celtics have played one of the toughest schedules in the state during the first four or five weeks and playing consistently good teams can start to wear down teams at times.

John Brantley’s squad did not show any hangover effects from their close home loss to Raines 10 days ago. The Celtics welcomed in their first district opponent of the 2022 season, the St. Joseph Academy Flashes.

Trinity Catholic got off to a quick start with four touchdown in the first quarter. Brantley knew his team was ready to play after having a good week of practice following the loss.

“It was good, but I was telling the kids we were very unemotional in our last game, and we just didn’t play with football emotion. Football is an emotional game and if you don’t play with that emotion, it’s hard to do some of the things you need to do against good teams.,” he said.

Coming into the week, even with the three-day delay because of Hurricane Ian, Brantley wanted his team to just worry about themselves and put their best foot forward heading into district play.

“That was the talk of the week, we have a district game, and we need to be concerned about how we perform and how we do things during the week.,” he said.

Did they ever perform as eight different players scored a touchdown, including sophomore wide receiver Gerald “Juice” Lawton III, who scored on a touchdown on a punt return. The big lead allowed for the Celtics to give all three of their quarterbacks’ valuable experience.

“It was good because we’ve really leaned on our big guys up front in running backs Beau Beard and Jamarkus Starkes and have done a great job. But to win a state championship and do the things you need to do to be successful, you have to be well rounded and not one-dimensional because you can run into somebody who will stop you.,” Brantley said.

St. Joseph, a program that moved up from the independent level before the 2022 season, they are now 1-4 on the year and will host Saint Francis Catholic on Friday at 7 p.m.

Coach Brantley had nothing but good things to say about the Flashes and has a ton of respect for the program.

“I respect that program, it’s a program going from an independent status to a FHSAA district. They just don’t have the numbers yet but he’s (St. Joseph head coach Thomas Dickerson) willing to build it.”

The win moves the Celtics to 3-2 overall and 1-0 in district play as they prepare to host Calvary Christian (Friday 7 p.m.), a team that has pushed the Celtics to the limits the past two seasons. Brantley said the team played a complete game tonight with success in all three phases and wants to see the consistency continue as they dive into the second half of their season.

“They see they can do it. We haven’t had many of those games since I’ve been back, and we did it tonight. They know they’re capable of doing so.”