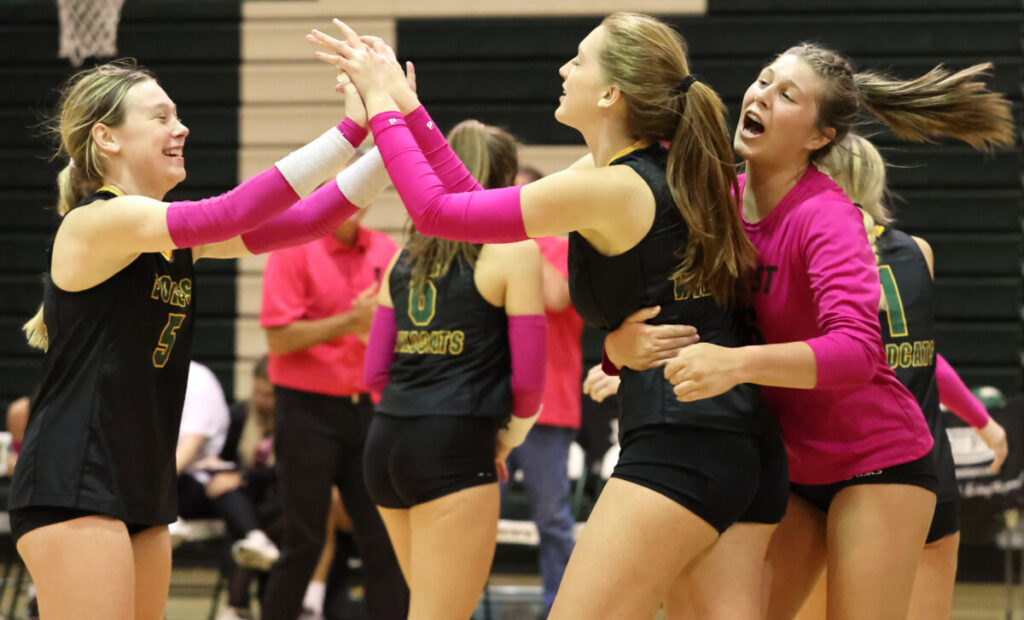 Falling behind 8-0 in the first set wasn’t exactly the start that Forest wanted in Tuesday night’s volleyball match against district opponent Buchholz.

But Forest didn’t panic and showed great fortitude by storming back to win the set by a score of 25-12. The Wildcats didn’t stop there and rode the momentum to take the next two sets by scores of 25-21 and 25-19 to beat Buchholz and avenge an early-season defeat to the Bobcats.

The loss dropped Class 6A Buchholz to 11-10 overall, while the victory improved Class 6A Forest to 8-6 on the season.

“We had such an ugly start in the first set, but the great thing is we didn’t panic, got back in the match and went on a run,” said Wildcats coach Jimmy Collins. “Buchholz swept us in three sets the first week of the season and we’ve come a long way as a team and we’re getting more consistent. Ava Keuntjes is as good a setter as there is in the state and was setting beautiful balls tonight. Outside hitters Allison Hamm and Kailyn Howard and middle hitter Avery O’Cull did a good job of putting the ball down. Buchholz was very effective in blocking our shots in the first match, but tonight we were able to keep them off balance because our tempo was too fast for them.”

Buchholz (Gainesville) started the match by jumping out to an 8-0 lead behind solid net play by Brooke Hankerson and Alex Sixbey and several miscues by Forest.

The Wildcats staged a furious rally behind excellent play by Keuntjes, who finished with a team-high 30 assists and had three of her six aces, and several kill shots by Howard to tie the score at 8-8.

Forest then went on an incredible 17-4 run as Taylor Sanders had a block, O’Cull had a pair of spikes and Buchholz committed numerous errors as the Wildcats eased to the 25-12 win.

With the momentum clearly on its side, Forest jumped out to a comfortable 13-7 lead in the second set as Howard had three of her match-high 13 kills and a pair of service aces.

Buchholz rallied as Autumn James unleashed a number of service aces and Jordan Czaplewski drilled several winners to tie the score at 20-20.

Forest stayed focused and went on a 5-1 run sparked by kill shots from Howard and Dallas Papy and a pair of Bobcat errors gave the set to the Wildcats.

The third set was tied at 14 before Forest utilized three service aces from Keuntjes and a number of kill shots from Howard, Papy, O’Cull and Hamm, who finished with 11 kills, to close out the set and the match.

Beating Buchholz and earning a measure of revenge was nice, but of more importance, the win gave Forest a crucial district victory over the Bobcats. Every district win is important with only two weeks until the district tournament.

“New Smyrna Beach is number one in the state in Class 6A and is clearly the top seed in our district, but if we can get a higher seed, we could get a home match in the first round of the district tournament,” coach Collins said. “I’m really proud of the girls for overcoming such a horrific start and we just played lights out after that. This was a good district win and we’ve been fighting to overtake Buchholz in the standings.”

Forest is back in action on Wednesday night with an away match at Belleview. The Wildcats have a home match on Thursday night against Tallahassee Chiles.