The second thing that was wrong about the coup last Tuesday 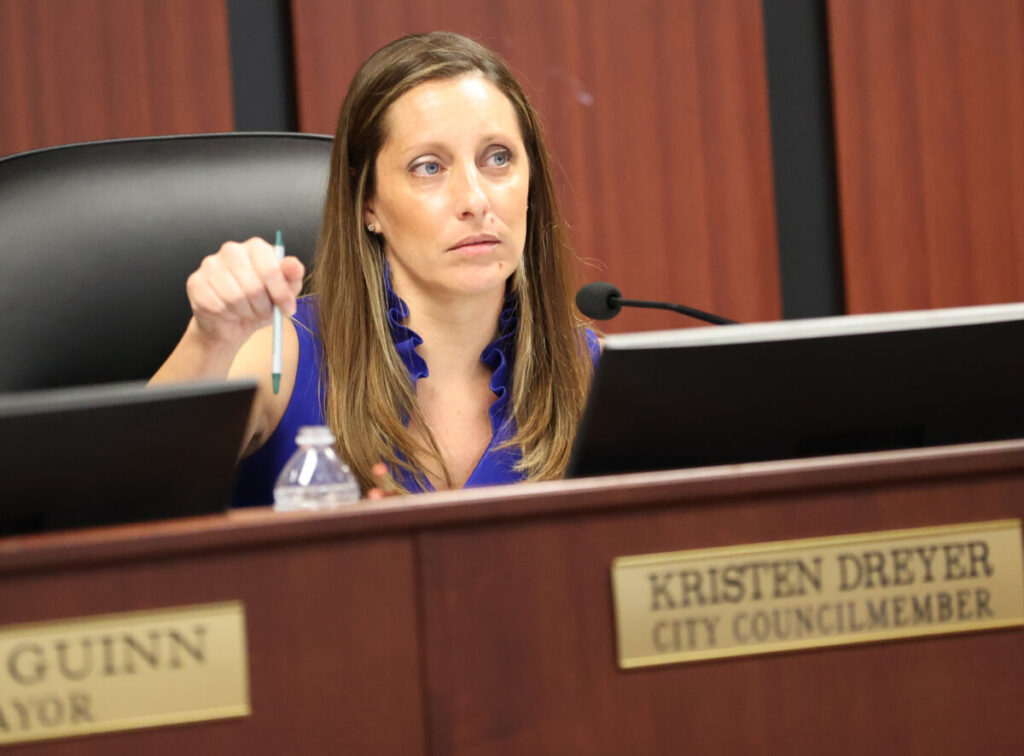 To follow up on last week’s editorial on the sudden termination of Ocala City Manager Sandra Wilson during the Ocala City Council meeting April 19:

The second thing wrong about last Tuesday’s coup was the disturbing double standard by the three city council members who voted to immediately terminate Sandra Wilson.

James Hilty, Kristen Dreyer, and Barry Mansfield voted to dismiss Ocala’s city manager, Sandra Wilson, based on an auditor’s report that said the city should have been more organized about how it handled two contracts that didn’t seem to result in a significant financial loss to the city.

They also cited highly subjective concerns about “leadership” qualities of the manager and city employee satisfaction.

In the minds of those three city council members, it was grounds for immediate removal.

Under our city’s charter, the city council has authority to hire and fire these top spots: the city attorney, city manager, city auditor and city clerk. The rest of the city staff, besides the police department, falls under the purview of the city manager. The structure protects the city from council members who would use their influence in the city’s day to day business to the benefit of friends and insiders.

At least two times during the discussion, Dreyer and Hilty made a comparison of allegations of conflicts of interest the city attorneys have adamantly denied. Both Dreyer and Hilty made it a point to politely assure City Attorney Robert Batsel Jr., that although they were using the example in discussion – they weren’t implying the city attorneys had acted inappropriately when they inserted a conflict of waiver clause into the city’s legal contract without talking to them about it in an effort to represent both developers and the City of Ocala.

We are awestruck on how the council inconsistently wielded their immediate fury against the city manager while there was no evidence of an immediate threat to the city or related financial loss while letting the city attorneys continue in a role that leaves the city very vulnerable.

The three council members feel “ok” and very polite about any talk of termination or criticism against the lawyers- and that is where they show their bias.

For the sake of this conversation, let’s put aside what appears to be questionable legal advice related to three constitutional challenges of ordinances drafted by the city attorneys that the city has had to pay out on over the past year. Admittedly, the fire fee one costing the city more than $80 million dollars, which will significantly impact the city’s finances in the coming years, is a hard one to swallow.

Instead, lets talk about the cost to the city for allowing their attorneys to represent both the city and developers. A recent public records request shows the city attorneys continue to represent developers that do business with the city without obtaining the city’s informed consent waiving the conflicts.

Let’s review some specific examples that give us pause.

Remember that “form” annex agreement and ordinance that Assistant City Attorney Jimmy Gooding got passed by the city council on the consent agenda in October 2020 that allowed the city engineer to enter into an agreement with developers outside city limits to hook up to water?

Under the ordinance, city staff could enter into the form annex agreement with developers “with such revisions as are acceptable to the city attorney based upon its determination” and only the signature of the city council president would be necessary to commit the city resources. Since council did not have to approve the contracts between the city and developer there was no mechanism for letting the public know about them.

As previously reported, city infrastructure, such as electric, water, sewer, can be extended five miles outside the city limits to service developments in the county, according to the city engineer Sean Lanier.

Since Marion County’s infrastructure is so limited, city services look attractive to those companies who wish to develop outside the city limits- many of whom are also represented by the same attorneys as the city.

In the case of the October 2020 approved annex form agreement, the Gazette previously reported that just months after approval of the form one of the largest developers in Marion County, World Equestrian Center, who is also represented by the city attorneys, entered into the agreement for city services to a mobile home park that they were using to house employees.

The reason it was so unusual is that first, The City of Ocala hasn’t permitted new mobile home developments in their zoning since 2017. Why then would it agree to ever annex one into city limits?

Second, there was some funny business billing the developer that essentially gave the developer a $80,000 discount on the hook up that no other developer received. Since that last report, we’ve obtained an email through a public records request that reflects a representative of the developer, Don Deluca, asking Batsel to call him about the invoice they received related to hook up shortly after signing the annex agreement. “We think we now see why this was invoiced this way, however don’t think the billing coincides with the spirit of the agreement. Specifically, section 3.2 reflects our intent and understanding we would be billed for in-city rates.”

The invoice next went into some mystery limbo until the Gazette pointed the preferential treatment in December of 2021, almost a year after the transaction.

The attorneys have handled plenty of other business between the city and the same developer, such as agreements for sale of property, annexation of other parcels, even negotiating waiver of city liens its owed.

Why hasn’t the auditor been asked to investigate any of those transactions?

Following that December 2021 Gazette report, there is another email reflecting conversations between Batsel and staff indicating that he might have to redo that form annex agreement once again.

We’d like to see the procedure for making deals with developers more transparent and can’t help but wonder if the city attorneys structured the transactions in such a way that it wouldn’t be.

Gooding and his partner Batsel swear emphatically that the city line is their Chinese wall of sorts when it comes to representing developers and the city.

Yet how can they in good faith write a contract for the city to use with developers they know they also represent? And why is the city taking advice from attorneys who have already admitted to having a greater personal financial interest with local developers than with the city?

Council, why aren’t these issues drawing your scrutiny like the issues that drew your ire against Wilson?

Look at the conflicts of interest related to developments on Maricamp Road around 25th Avenue where the city attorneys were representing the city, and on the other side of the table was one of their biggest clients John Rudiyani. But not just Rudiyani. In a letter dated March 16, 2021 local attorney Tim Haines reaches out to Batsel in his capacity as “attorney for the city and Haselden family” to work out an easement issue that would impact the ability of the Haselden property to be developed into 180 single family homes.

The public outcry to back-to-back approval of a cluster of real estate developments that would impact Maricamp road have been loud and taken up hours of council meeting time.

Unfortunately, the public didn’t have the benefit of sitting at the same table while the attorneys and developers worked out how they could overcome obstacles any logical person without city planning experience would have scratched their head on.

The public had three minutes at the podium and the city council advice from attorneys whose loyalties were conflicted.

The public wants and needs the city making independent decisions regarding development. With a city attorney financially beholden to developers advising them- how can council in good faith say they are?

Another aspect of how these conflicts of interest create financial problems for the city is when developers represented by the city attorneys owe the city money.

For example, there was a development agreement for the Shady Oaks PUD between Roy T. Boyd Trust and the city twenty years ago that required the trust pay the city $75,000 for improvements at the adjacent Scott Springs Park.

The city attorney firm has represented the Boyd family for years.

As of this week, the money still hasn’t been paid by the developer and the property has changed hands. The city recently issued an invoice in February 2022 to Boyd Real Estate Group for the $25,000 but one has to wonder if a statute of limitations hasn’t run out on the city collecting it at this point.

The other question we’d have is why wasn’t the city’s interest protected prior to the property changing hands? One would think some type of document such as a lien could have been recorded in public records so that title couldn’t pass without the developer paying the city.

That same Boyd developer has other development agreements with the city currently, including ones that have financial incentives from the city.

Why isn’t the Auditor being asked to investigate any of those development deals?

We can’t help but scratch our heads at how those council members justify their infuriation with city management being late to reconsider contracts that poised no long-term impact or financial loss to the city while they politely let the city attorneys work out their contract and finish up business.

One is the obvious. The attorneys and developers are powerful “friends” council likely feels uncomfortable holding accountable.

All three attorneys have sworn up and down that they have not hurt the city and rather than order an audit or demand explanations, the council swallows their emphatic denial and smiles at them.

The city manager, Sandra Wilson, was not as equally powerful. The three council members could insinuate and make allegations to serve their desire to remove her immediately with little consequence.

But make no mistake – their decision to fire Wilson was buoyed by efforts of the city attorneys.

The city employee was told to categorize the concerns as a whistleblower complaint for her own protection and although Batsel told the council the firm was leaving the issue in the hands of the auditor and outside attorneys who specialized in labor law- all three city attorneys met and conferred on the matter many times in the days that would follow.

The whistleblower complaint and subsequent meetings that included all three attorneys started just two days after accusations were made during a city council meeting by Dreyer that city management was running a “shadow investigation” about the conflicts of interest and unusual billing practices of the city attorneys in support of moving city legal services in house.

All three city attorneys showed up for that meeting openly angry at city management for the inference that they had done anything wrong.

You could imagine the city attorneys being not so happy at the thought of potentially losing the city’s million-dollar a year billing. And what about the financial loss at stake to their developer clients if they weren’t in that role?

And what about the developers who have had the benefit of their attorneys also serving as city attorneys? One could understand they’d prefer to keep the wheels greased, particularly during a building boom such as we are experiencing now.

In the case of Dreyer, we wonder what influence the prominent developer engineer David Tillman has since they are romantically involved. Tillman works hand in hand with Gooding and Batsel for the county’s largest developers.

Tillman was another one that showed up at the end of the city council meeting to watch Tuesday’s coup – but he watched from the lobby looking through the door’s portal as Dreyer excitedly executed her vote to terminate the city manager.