The court will consider MCBOCC’s decision on WEC Jockey Club 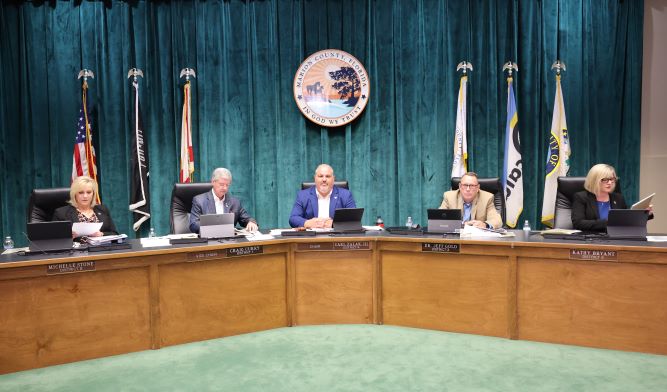 The Marion Commission meets on their agenda item for the decision on the approval or disapproval of the WEC Jockey Club development during the Marion County Commission meeting at the McPherson Governmental Complex in Ocala, Fla. on Tuesday, June 21, 2022. [Bruce Ackerman/Ocala Gazette] 2022.

The plaintiffs who filed a request for a formal administrative hearing challenging Marion County’s June adoption of amendments to its Comprehensive Plan which subsequently allowed the approval of the WEC Jockey Club Planned Unit Development will have their day in court early next month.

Cape Coral-based Land Use Attorney Ralf Brookes filed the request July 20 in the Fifth Judicial Circuit Court in Marion County on behalf of Damian and Rebecca Guthrie and Don Love, who own property adjacent to or near the 1,029-acre property along rural county roads 318 and 225 in Reddick, along with Save our Rural Areas (SORA), a non-profit organization dedicated to preserving the county’s rural lands and character.

The plaintiffs allege the Future Land Use Map amendment and associated text amendment to the County’s Comprehensive Plan are “not in compliance” because it is internally inconsistent and does not address the potential impacts on the Rainbow Springs Group Basin watershed, among other claims.

“The Comprehensive Plan amendments were not supported by data or analysis,” said Brookes shortly after the filing in July. Formal administrative hearings are held to resolve contested issues between private citizens and public organizations and agencies of the state.

Jerome Feaster, one of the founders of SORA in 2005 said: “We think we’ve got a good shot at the hearing; hopefully it (WEC Jockey Club PUD) will go back to the county and be revised. It won’t stop what’s going on but we’re hoping for a better outcome.”

Meanwhile, a court date for another legal challenge to the PUD’s approval, an appeal contesting Marion County Commissioner’s approval of the property’s rezoning from mostly agricultural to PUD, also filed by Brookes July 20, has not been scheduled as of press time.

In that case, the Guthries, Love and SORA, along with Michael and Jacki Robinson, Jennifer Hale and Karen Courchaine allege the approval of the rezoning application by the Board, “violates the essential requirements of law,” due to double and triple dipping of development density and intensity.

Both legal filings followed a June 21 3-to-2 vote by Marion County Commissioners approving Golden Ocala Equestrian Land LLC.’s PUD application for the massive project, despite the recommendation of denial by County Growth Services staff for the amendments and the rezoning, and over fervent objections from droves of area residents and SORA.

Prior to the PUD’s approval, Commissioners adopted the Comprehensive Plan changes, which then allowed them to vote on Golden Ocala’s application.

During the June meeting, representatives for Golden Ocala and WEC Ocala, including attorney James, “Jimmy,” Gooding said the project should be approved because several other nearby developments had industrial or commercial uses, including an RV park, employment center and a mine.

According to both the administrative hearing request and the appeal, the individual petitioner’s properties are all within 1000 feet of the WEC Jockey Club property and all would be adversely affected by the proposed development. The Guthrie’s farm of nearly 22 acres is directly adjacent to it.

The Comprehensive Plan amendment is urban sprawl “leapfrog” development that is not supported by services including potable water, sewer, and transportation infrastructure, the plaintiffs allege.

“The WEC Jockey Club project is essentially a commercial housing development,” said Feaster. “Hopefully we can get them to trim back some of the site plan to make it more suitable so that it won’t disrupt the community as it is planned right now.”

“If it goes through, it’ll create traffic and roadway issues and negatively impact our water resources,” he said.

The hearing request mentions the report by Growth Services staff on the rezoning application, which states, “Increasing opportunities for urban commercial activities in the Rural Area makes delineating the separation of Rural and Urban Areas difficult. Such difficulties make efforts to support and retain Rural areas and rural character increasingly difficult leading to increasing urban sprawl as urban uses encroach into and proliferate in Rural Areas.”

The petition for the hearing also contends Golden Ocala has not reacted appropriately to concerns or comments raised by several state agencies that reviewed the county’s comprehensive plan amendment change as required.

The concerns include the previously mentioned Rainbow Springs, the existence of federally protected or threatened or state protected wildlife species on the property and the many cultural resources in the general vicinity of the WEC Jockey Club, including multiple attempts to locate a potential historic site from the Second Seminole Indian War known as Fort Drane, which likely contains human remains.

The former Ocala Jockey Club sits within the county’s Farmland Preservation Area (FPA) in northwest Marion County and outside its Urban Growth Boundary. The Roberts, who have lived in the Ocala area since the 1990s, purchased the property for $10.5 million in August 2021 and soon announced plans to build a second WEC location on the site.

As of press time, County Attorney Guy Minter had not responded to a request for comment on this story made through Marion County Public Relations.

A reply to an email sent to Gooding asking for comment on the legal challenges said, “Thank you, but we have no comment.”

As for Feaster, he said he and other members of his group are not opposed to growth, provided it’s in the right place and it’s done correctly.

“We want them to give us something to go forward with and be part of the process as opposed to having something stuffed down our throats,” he said.