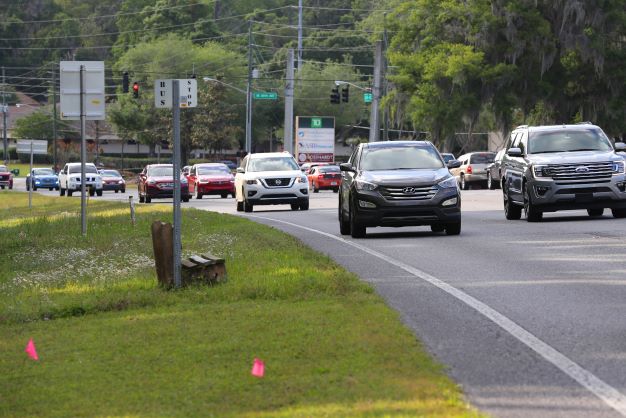 A controversial question of whether a proposed 7-Eleven convenience store in Southeast Ocala can sell alcohol will get a rehearing before Ocala City Council tomorrow because of a technical error: a public notice of the last hearing was sent out to residents too late.

After a lengthy meeting on Aug. 16, council members voted 3-2 to approve the company’s request, despite objections from nearby residents worried about increased traffic and alcohol sales near their homes.

However, one of the residents at the hearing pointed out a number of problems with the run-up to the hearing, chief among them that the public notice for the Aug. 16 hearing was not sent out in time. City staff reviewed the question and determined that, in fact, the notice was sent too late.

At issue is whether the proposed 7-Eleven store at SE 25th Avenue and Maricamp Road should be allowed to sell beer and wine. The request was originally approved in July 2021, but the permit expired after one year because no construction had begun on the site. The Aug. 16 hearing was to renew the permit.

The 7-Eleven would be accessible from a proposed roundabout on SE 25th Avenue and Maricamp Road. The site is just east of the Insight Credit Union and across the street from the Woodland Villages communities.

The Aug. 16 review was part of a quasi-judicial public hearing that requires the city council to consider substantial evidence shown in the hearing, such as documents or sworn testimony. Attorneys and developers/applicants cannot give sworn testimony, and council can only consider evidence in a hearing in making their decisions.

City attorney Robert Batsel addressed the quasi-judicial status of the agenda items early in the Aug. 16 meeting; those speaking would not be formally sworn in, (as happens in other public meetings in Marion County), but they would be required to promise to tell the truth.

Brad Tropello, a Woodlands Village resident, introduced numerous emails from area residents who opposed the 7-Eleven project earlier this year. Fewer residents were at this hearing, Tropello said, because the notice of hearing wasn’t sent timely.

Tropello entered into evidence a copy of the notice of public hearing for the beer and wine sales request. He pointed out that no date was on notice, as the state requires. He said a city staffer told him it was mailed “last Wednesday,” which would have been Aug. 10, outside the required notice period.

Tye Chighizola, Growth Management director for Ocala, stated that a 10-day notice prior to an alcohol hearing was required. “I’m pretty sure she [city staffer] mailed it out on the 4th of August. That’s normally the mailing date.”

Batsel told the council that city staff would look into the discrepancy.

A notice to a resident obtained by the Gazette for the Aug. 16 hearing was postmarked Aug. 9 and the Jacksonville post office mark was Aug. 10. The notice itself was not dated.

The staff review found that a different hearing notice had been mailed on Aug. 4. The 7-Eleven hearing notice was mailed Aug. 9. Subsequently, Batsel had staff set up the Sept. 6 rehearing.

Another problem was that some of the supporting documents for the project contained incorrect information. The map attached to the agenda, for instance, referenced parcel # 21863-000-00, a 17.5-acre tract listed on the Marion County Property Appraiser’s site as belonging to Rural King at 1138 NW 27th Ave. There is a 7-Eleven store on that corner of NW 27th Avenue and Bonnie Heath Boulevard. The parcel number for the proposed 7-Eleven is # 29509-000-27, about 7.8 acres at 2590 SE Maricamp Road.

The agenda attachments also included a printout from the State of Florida’s Division of Corporations, identifying 7-Eleven as the entity requesting the alcohol sales permit. According to that record, 7-11 is owned by Southland Corporation, based in Texas.

Southland Corporation, however, does not own the property on Maricamp Road; local developer RM Maricamp, LLC owns it. The managers of  RM Maricamp, LLC are International Property Services Corp., an entity related to developer John Rudnianyn who has many projects ongoing in Marion County, and who is currently represented by the same attorneys who represent the city for development projects outside the city limits.  The second manager of the RM Maricamp, LLC is McBride Management, LLC, located at 1553 SE Fort King St., Ocala;an entity related to developer Raymond McBride.

Tropello, the Woodland Villages resident, brought other documents to the Aug. 16 hearing. This included crime studies that detailed malt liquor and its proven link to public drinking, disorderly conduct and other crimes. He also noted the property currently violates city ordinance by having over 12 inches of vegetation growth, “the same as last year when they were before you.”

Tropello cited concerns about drivers who might try to turn left out of the proposed 7-Eleven to go west on Maricamp Road and showed photos of heavy traffic eastbound and westbound on the busy road. The intersection of State Road 464 (Maricamp) and SE 25th Avenue begins to curve southeast/northwest making left-hand turns against the curve especially dangerous.

“It’s not just the traffic impact that you’re thinking about, which is crazy,’’ he said, “but think about this: Those people are getting alcohol.”

Tropello said the incompatibility of a 24-hour convenience store and an adjacent residential neighborhood was reason enough to deny the zoning. He presented minutes of a March 2021 city council hearing for a previous 7-Eleven alcohol permit and pointed out that city ordinance # 6-33 says requests for licenses or zoning changes can be denied due to a project’s proximity to residential areas, increased criminal activity due to the alcohol location, the hours of operation, incompatibility, congestion or overcrowding of an area.

Tropello also introduced evidence that various city council members at the March 2021 hearing  asked five different times if they could deny the proposed 7-Eleven based on the presence of other similar businesses in the area. There is a Diamond Oil convenience store at 2534 SE 17th St. selling Citgo branded gasoline across Maricamp Road from the proposed 7-Eleven. Minutes of that meeting show that Chighizola explained the ordinance to the council, detailing the reasons why a permit could be denied.

Tropello questioned why city staff didn’t advise council at the earlier hearing about the options to deny per city code, and why school board staff didn’t address the school impact of an approved multi-family project directly behind the RM Maricamp, LLC parcel.

He suggested council review how city staff provide relevant information and give evidence prior to council decisions and case requests that include details about currently approved and future projects that will impact traffic and school capacity.

Other Woodland Villages residents have filed letters of objection, citing concerns about crime, the need for a wall between the community and SE 25th Avenue and pointing out that alcohol is already available for sale nearby at the Diamond Oil store, the WaWa and the Publix store close to SE 36th Avenue.

Woodland Villages resident Michael D’Ambrogi wrote, “These types of establishments have no place in residential or adjoining peaceful residential properties… Would you want this type of growth planning near your residence?”

Tropello said, “If everybody looks under their seat right now, you’ll either find a car wash or a 7-Eleven because they’re everywhere.  … You don’t need another one, there’s a WaWa down the street.”

Michael Sizemore, president of the Woodland Villages Master Board of Directors, wrote to the council, “Thousands of apartment[s] have been approved by the city and county [in this area]; those units have not yet put one car on the road. We have congestion issues now. What happens when that traffic comes?”

Records show that area of Maricamp Road has had over 1,000 apartment units approved for construction in recent months.

Attorney Fred Roberts, representing the 7-Eleven’s developer, rebutted some of the issues raised by Woodland Villages residents, focusing on compatibility with single-family, adverse impact with the alcohol and concurrency issues with traffic.

“We assert that multi-family and single-family do not conflict with one another whatsoever; they are both residential uses,” he said. Roberts cited multiple apartment complexes next to single-family neighborhoods including, “Canterbury Circle, Carrington Lane, Deerwood, Village Square at 36, Windsor Tower, the Oaks, Tuscany Place and the Steeples.”

With regard to crime, Roberts cited data from the Ocala Police Department focused on two WaWa stores already operating in the city. He said calls for service were frequently for problems such as abandoned vehicles and alarms going off, not major crimes. Roberts said this 7-Eleven would have similar customers and issues as the WaWa store on SE Maricamp less than two miles away, not the one on Pine Avenue nearer downtown, which services a different clientele.

Roberts offered no police report or evidence provided about calls for service at the Diamond Oil across the street from the proposed 7-Eleven.

Roberts also said the Florida Department of Transportation has control over Maricamp Road because it is also known as State Road 464. “A lot of the concerns related to Maricamp, we have to look to FDOT,’’ he said, “what they allow, what they require.”

“The biggest takeaway here,’’ Roberts said, “is [Woodland Villages residents] do not want a particular project.” He said residents have previously opposed “single-family residential, a bank, a shopping center, an office park, all on these parcels. …These projects are unequivocally compatible.”

Mayor Kent Guinn acknowledged the challenges of development in that area of the city and cited the success of Deerwood Village, an office and apartment combined project, near Laurel Wood, which was opposed at the time of its development. It opened in 2006 and, he said, it has worked.

Toward the end of the Aug. 16 lengthy discussion, Council Member Jay Musleh stated, “We’ve heard hours and hours of testimony on this for the last year and a half; let’s vote.”