The cost of early termination of city manager contract 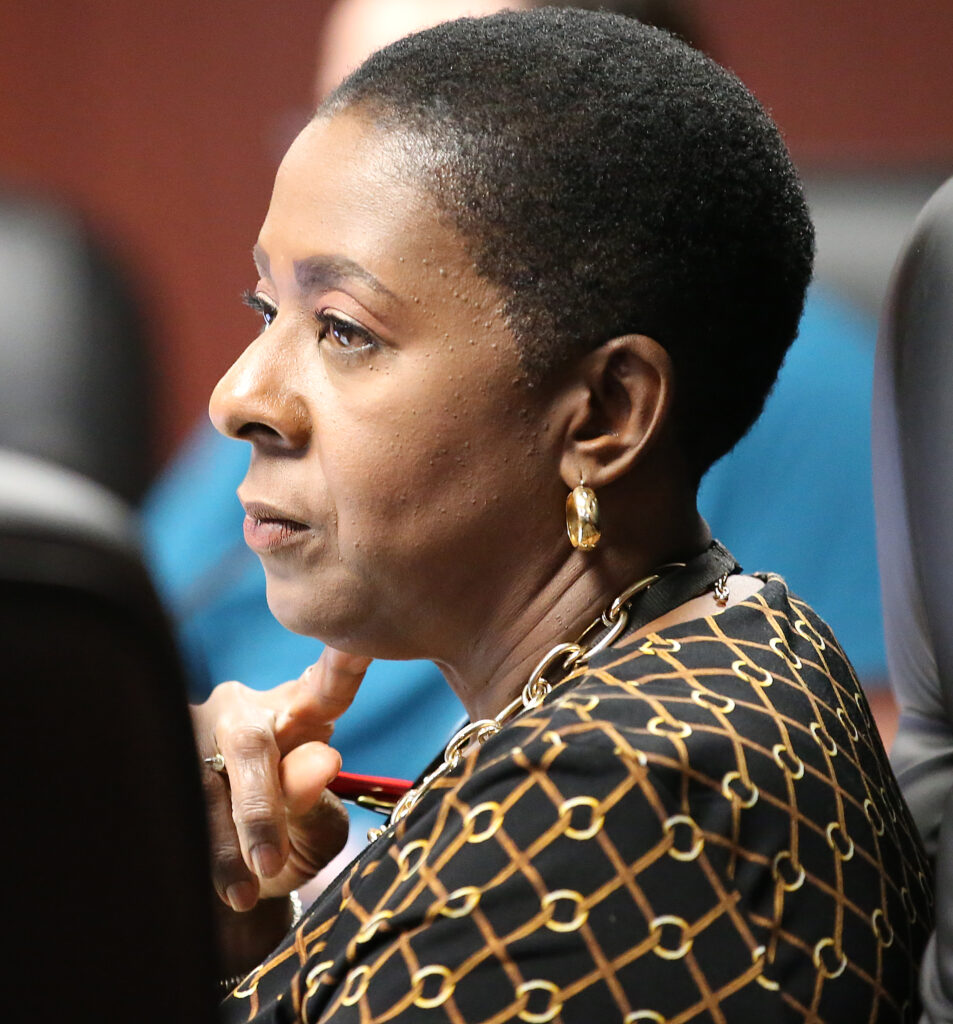 In a surprise move on Tuesday night, the Ocala City Council fired City Manager Sandra Wilson at the conclusion of a regular meeting, despite it not being listed as an agenda item.

Now, due to stipulations in Wilson’s contract the city will likely pay the former city manager a lump sum cash payment equal to 20 weeks compensation as “severance,” as well as all life, health, dental and disability insurance, and all other employer-provided benefits at city’s expense, if she was fired without “cause.” The city manager receives an annual base salary of $225,500.

Under the contract, if Wilson was fired with “cause,” then the city’s only obligation is to pay Wilson all compensation and benefits “accrued but unpaid at the date of termination.”

With or Without “Cause”

Cause, according to “Section 4 (D)” of the city’s contract with Wilson, signed on July 7, 2020, is defined and limited as the following reasons: “(1) willful dereliction of duty; (2) any felony or misdemeanor conviction of any crime involving moral turpitude; (3) material dishonesty; public insobriety or drug or alcohol addiction; (4) misconduct as defined in Florida Statute [FS] 443.036(29) in which case, by statute, such payment would be prohibited; or (5) any other act of a similar nature of the same or greater seriousness.”

FS 443.036(29) defines misconduct, “irrespective of whether [it] occurs at the workplace or during working hours,” includes “(a) …willful damage to an employer’s property that results in damage more than $50, or theft of employer property; (b) carelessness or negligence…(c) chronic absenteeism or tardiness…(d) …willful and deliberate violation of a standard or regulation of this state…(e) …violation of an employer’s rule…[to include] committing criminal assault or battery on another employee, or on a customer or invitee of the employer or committing abuse or neglect of a patient, resident, disabled person, elderly person, or child in her or his professional care.”

On April 21, council member Jay Musleh said that his opinion is that Wilson was fired without cause last Tuesday, specifically after speaking to the city’s attorney Thursday morning. He dissented in the vote to fire Wilson on Tuesday.

In reference to Wilson’s contract, Musleh deferred to the city attorneys on such matters, being that he didn’t have a copy of the contract in front of him, but agreed that the former city manager’s severance package was the next step in the process.

“That’s one of the things that I thought we just glossed over [last Tuesday],” said Musleh. “We didn’t talk about…well, there’s a contract. And that’s why having a more formal vote on May 3 [would have been better.]”

Musleh said he recognized that rumblings had been going on behind the scenes for much of Wilson’s tenure as city manager, and he was sure he wasn’t the only one to recognize those rumblings for what they were.

“I’m not stupid. I can read the writing on the wall,” he added, referring to the dismissal and its buildup. “And I think Ms. Wilson could too.”

Council president Ire Bethea, who along with Musleh dissented in the vote to terminate Wilson’s contract, said on Thursday that he did not believe she had been fired for cause, but deferred to the city attorney on any questions regarding her contract severance package.

“It’s really too early to say right now,” Bethea said. “We’re working on it. Hopefully, we’ll have worked out the details by the next council meeting on May 3.”

Councilmember Barry Mansfield, who made the original motion to dismiss Wilson on April 19, citing a report from the city auditor involving a whistleblower complaint as his reason, spoke to the Gazette on Thursday, April 21.

He said he didn’t know if Wilson had been fired with or without cause, just that he had questions about her levels of leadership.

“If those are the only choices for cause,” said Mansfield after being read the contract’s definition of cause for termination and then asked if she had been fired with or without cause, “then it would be for not. It was mainly for lack of leadership. So, that’s probably not in that but…it’s not that I think she did anything but that she wasn’t paying attention to her staff.”

Mansfield told the Gazette that he asked the city auditor, Randall Bridgeman, immediately following the city council meeting on Tuesday to look into whether or not there was any criminal wrongdoing in the auditor’s findings.

“I disagreed with some of the findings in the report and the ramifications. I’m holding the report to a higher standard,” said Mansfield.

When pressed for what part of the auditor’s report he felt could rise to the level of criminal, Mansfield pointed to the questions that city staff discussed with councilman Jay Musleh concerning the city’s banking contract with SunTrust.

“Why were they working so hard to keep SunTrust in place?” he speculated. “Was SunTrust receiving special treatment? Were there kickbacks involved?”

Mansfield said he had not heard a response from the auditor or the city attorneys regarding his questions. But, Ocala Police Department Chief Mike Balken told the Gazette that his department was not currently investigating anything related to the auditor’s report.

The council considered two auditor’s reports on April 19. One was from the accounting firm Purvis & Gray, which shared a positive conclusion to their extensive financial audit of the city’s financial statements and internal controls. It drew no discussion from the city council.

The second auditor’s report, conducted by Bridgeman, is the one that ended in the dismissal of the city manager. A full copy can be read downloaded here:April 18, 2022 City Auditor Report

The first complaint from the whistleblower referenced events that began in 2019 under then-City Manager John Zobler, who resigned abruptly in November 2019.

The contract for the city’s banking services was set to expire on April 30, 2020, and the whistleblower complained the city’s CFO, assistant city manager Bill Kaufman, did not act quickly enough to start the process to put a new banking contract in place. The events were unfolding a month after the COVID-19 pandemic exploded, impacting governments and businesses around the world.

According to the auditor’s report, an invitation to negotiate a new banking agreement was solicited on April 23, 2020. The city’s Finance Department’s evaluation committee chose SunTrust Bank (now called Truist) and TD Bank as the finalists.

Wilson was named city manager on June 2, 2020. Months later, on Nov. 9, 2020, the evaluation committee chose SunTrust Bank. The issue was set for the city council’s Nov. 17, 2020 meeting, but less than an hour before the meeting; SunTrust “changed their best and final offer.” This meant TD Bank now was offering better terms. The agenda item was pulled, and negotiations continued.

The city auditor’s report found that Kauffman and city Finance Director Emory Roberts decided in early February 2021 to stay with their recommendation of SunTrust. The bank had just switched names to Truist and was completing a merger with BB&T. For this reason, the bank could not enter into a long-term bank agreement with the city. The short-term banking agreement expires in June 2022.

Kaufman told the Gazette, “We wanted to give our current bank the opportunity to complete their merger, that is why we did a short-term contract. Again, we wanted to be fair and reduce as much risk to the city as possible.”

The auditor did not quantify any financial loss to the city in the report. He did state that some of the reasons city management gave for staying with the same bank were not set forth in the “Invitation to Negotiate.” The auditor also questioned the consistency of placing the contract on a consent agenda for one meeting and in general business for another.

The second whistleblower issue the auditor examined concerned the city’s contract with Kubra, a company that handles printing, mailing bills for the city’s utility services along with the kiosks used to accept payments. According to the auditor’s report, some city staffers expressed frustration about service issues with the company and wanted the city to terminate the contract.

In the bidding process, the Finance Department wanted the services to be divided across three separate contracts with companies InvoiceCloud, InfoSend and DynaTouch instead of Kubra. The auditor said the whistleblower felt it was inappropriate to split up the services that way, and felt it would expose the city to possible litigation from Kubra.

The auditor concluded the multiple-contract option violated the request for proposal (RFP) the city put out for the services, “which sought a turn-key solution with one vendor.” Failing to follow the RFP left the city exposed to litigation.

Again, the city auditor did not quantify any financial loss to the city, but said city management did not allow sufficient time to adequately address potential delays in the project.

Here is the auditor’s conclusion:

“The scope of this investigation was limited to the allegations in the whistleblower complaint letter to Sandra Wilson – City Manager dated March 4, 2022. The results of my investigation do not rise to the level of the definition of “gross management” as defined in the Florida State Statute. Mishandling by management is most likely to have occurred in the two management concerns identified in the whistleblower letter, barring any potential additional information coming forward.”

Kauffman announced this week his intent to retire.

Wilson’s contract would have been up on Oct. 31 of this year. She had originally been appointed to the role of city manager on an interim basis after Zobler’s abrupt resignation in 2019.

With more than 30-combined years of municipal government experience, Wilson was the first Black person, male or female, to hold the city manager post. Prior to taking over the top spot, she had previously been assistant city manager and director of human resources and risk management.