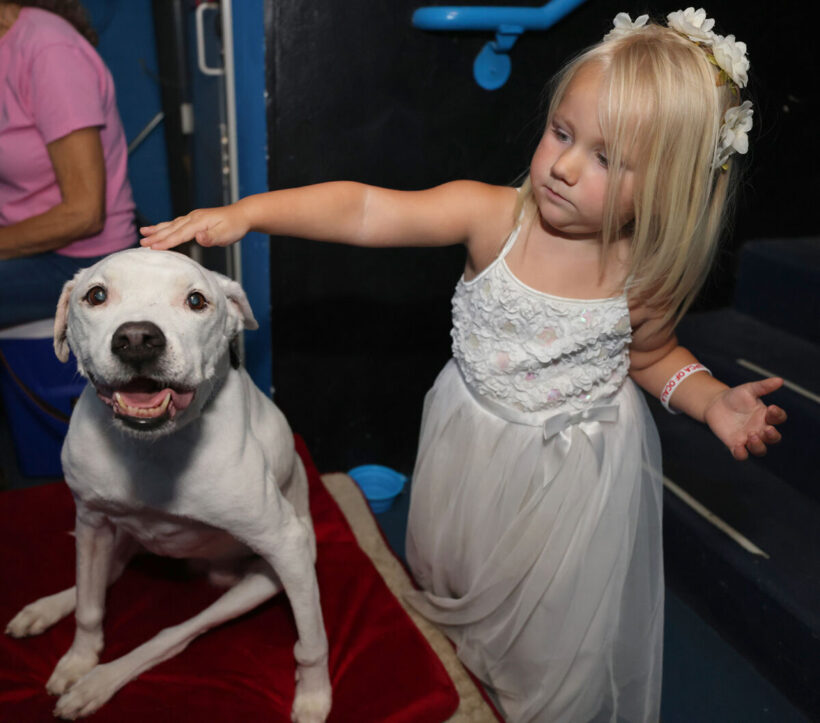 The massive photo of the happy snow-white canine Molly projected across the big screen at the Marion Theatre drew murmurs of adoration. The images of a bloodied and beaten Molly, the victim of animal abuse, had people gasping in horror.

On Sunday, April 24, animal lovers and advocates, along with elected officials and community leaders, were on hand for the premiere of the Molly’s Law Documentary. After surviving her harrowing ordeal, Molly became the ambassador for Molly’s Law, also known as the Marion County Animal Abuser Registry. The purpose of the documentary is to share Molly’s story and serve as a model for other communities to create similar programs.

Molly, an American boxer mix, was stabbed three times in the head and had her skull fractured with a baseball bat in early 2014. Her accused attacker, Steven Scott Fleming, served time in state prison on three counts of felony cruelty to animals.

Molly’s Law requires that any offender convicted of an animal abuse crime be placed on the registry, which was launched on Jan. 1, 2017. The online database allows citizens, pet sellers and rescue organizations to verify they are not placing an animal with an animal abuser.

Molly now has a forever home with Lilly Baron, president of the Society for the Prevention of Cruelty to Animals of Ocala (SPCA) of Ocala. A handful of other counties in Florida have adopted similar legislation, but Baron, and many others, want to see a statewide registry and, in turn, a national database.

When asked where they are with advancing a statewide registry, State Rep. Stan McLain, of Ocala, said on Sunday, “We’re working on it.”

Sen. Dennis Baxley, also of Ocala, added, “We’re exploring options but probably won’t have any decision for a little while.”

Baron said the documentary and appeal for a broader registry came about because, “We had somebody who abuses animals go over the county line and it wasn’t effective in the next county. And that continuously happens. So, I put my mind to it that we we’re going to do a statewide animal abuser registry so they couldn’t get away with this.”

She said she presented “a beautiful gentleman the idea that we need to take this statewide, and he says, ‘Well, why don’t you do a movie?’ And I said, ‘Well, we can’t afford to make a movie, but we can make a documentary. So he made a donation for us to finance the documentary.”

The 24-minute film by Mark and Jackie Barrett details the abuse Molly suffered and how she was treated by Marion County Animal Services and later was adopted into the care of Baron. Among those featured in the film are Deborah Horvath, the director of Marion County Animal Services at the time Molly was attacked. In remarks to the audience on Sunday, emcee Shelia Arnett announced that Horvath had traveled to Ocala from Virginia to surprise Baron during the premiere. Horvath is seen several times in the documentary.

Also featured in the documentary is Peggy Hoyt, an attorney and animal activist whose father, John A. Hoyt, was formerly CEO of The Humane Society of the United States. In the film, she talks about evidence supporting that many forms of violence start with the abuse of animals and makes an appeal for a national registry.

Hoyt, who was in attendance at the premiere, introduced Deborah Darino, who, according to the Daytona Beach News Journal, is the leader behind Justice for Ponce, a group of animal rights activists who fought for justice for a Labrador retriever puppy named Ponce who was beaten to death in 2017 at a Ponce Inlet home.

Ponce’s Law, passed in 2018, increases the likelihood that someone convicted of animal cruelty could be sentenced to prison and allows a judge to bar someone from ever owning an animal again.

“With Debbie’s guidance and leadership, we now have a statewide felony animal cruelty statute, 828.12. What this statue does is, it guarantees that animal abusers will pay the price. Not only will they go to jail, they will never be allowed to own an animal again,” Hoyt told the audience.

“What does Ponce’s Law have to do with Molly’s Law?” Hoyt asked the crowd.

“Everything,” she said. “Once an animal abuser is convicted, we want them to go on Molly’s Law, the animal abuser registry, so they will never be able to own, acquire or possess animals. Thank you to everyone here who is in support of Molly’s Law and is a champion for animals.”

One member of the audience, Jaye Perrett, a former Marion County Sheriff’s Office deputy who often dealt with animal abuse cases, and a longtime animal advocate, said she thinks the county registry should be expanded.

“Years ago, the Humane Society of the United States did a survey with the FBI. They took the top 10 serial murderers in the country —nine of them were convicted of animal cruelty as teenagers,” she said. “I support this law 100 percent. I think it’s an excellent idea and the people who put it together should be commended and I hope it goes statewide and nationwide and becomes something we can all be proud of.”

As the documentary ended, Baron and Molly walked onto the stage and into the spotlight. As the clapping and cheering grew louder and louder, the entire audience rose in a standing ovation.

To see trailers and teasers for the Molly’s Law Documentary, go to spcaofocala.org

The county’s animal abuser registry is accessible at marioncountyfl.org/aar