Cooking up a new future

Melanie Patrick, a popular vendor at the city market, is opening her own bakery in downtown Ocala. 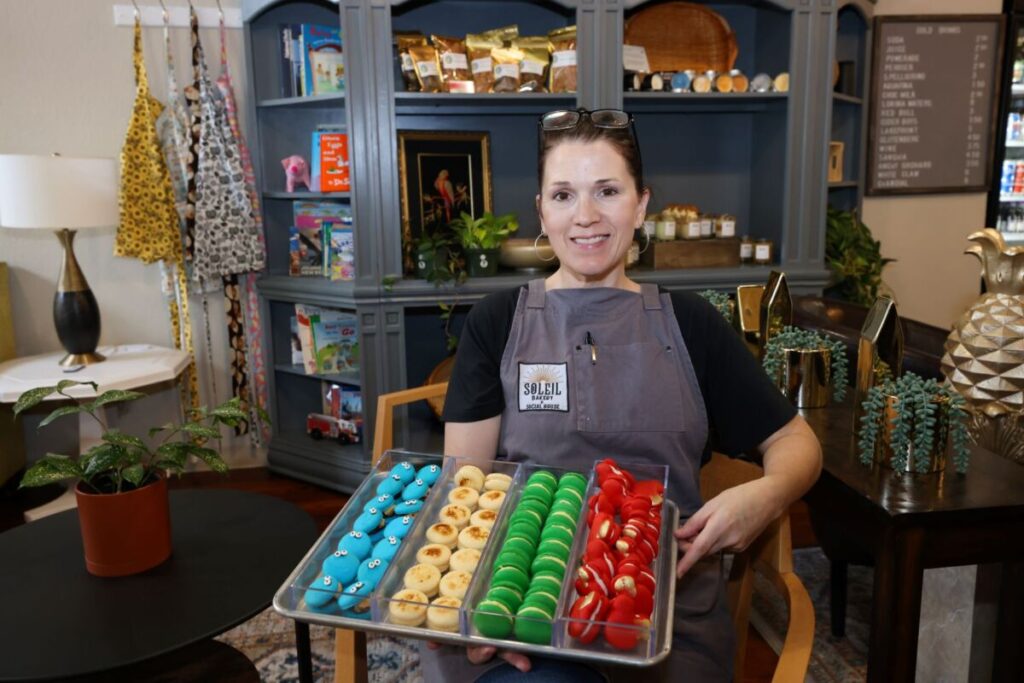 The art of baking is in Melanie Patrick’s blood, passed down from her mother and grandmother while she was growing up in Arkansas.

“My mom is a baker, not a professional baker, but she and my grandmother were really good bakers,” she said. “The first thing that I ever made was a peach cobbler, and I was hooked.”

Patrick’s goods have become a favorite at the Ocala Downtown Market and she soon will be opening her own bakery, Soleil Bakery & Social House. She hosted a soft opening on April 27 and said she hopes to officially open in about three weeks.

Located at 56 SE 1st Ave, the business adds another ampersand to the scene, catty-corner to Big Hammock Brewery & Bites. The bakery will feature macarons, pies and all sorts of creamy, fruity concoctions, along with Patrick’s mom’s famous carrot cake.

Patrick and her husband, Chris, and their sons lived the itinerant military life until he retired as a medical officer and colonel in 2020, after 30 years, which is when they decided to settle down in his hometown of Ocala.

“I was a practicing respiratory therapist when we married,” Melanie Patrick shared, “but gave up my career to follow him as most spouses do in military families. It’s too hard to continue working when you move every two years.”

Her first vendor event was a food truck festival in Maryland.

“A family came to my booth and was overly excited that I had French macarons  because their daughter had celiac disease,” she said.

As many of her Ocala regulars know, she has a specialty flavor macaron inspired by Sesame Street’s Cookie Monster, a beloved blue creature that she re-creates with a cookie coming out of his mouth.

“When I told them the macaron wasn’t gluten-free because of the added ingredients, the little girl cried for what felt like an eternity in front of me. I had no idea how serious celiac disease and gluten intolerance truly was. I changed all my products after that event to be safe for celiacs,” Patrick said.

She added that she has avoided signage and emphasis on the gluten-free aspect of her recipes.

“We don’t want people to think about it that way because when most people have tasted gluten-free items, they’re very dry and have no flavor and things like that,” she explained, “but the people at the market have learned that you can’t even tell that my stuff is gluten-free. It tastes wonderful. And it’s moist. You know, the cakes are moist, the cookies, my cookies are stuffed with ganache. We have found ways to make our food taste really good.”

Feeling connected with the community and being responsive to her customers’ needs are a couple of the not-so-secret ingredients to Patrick’s success and her happiness.

In a recent Facebook post, she writes “I love being trusted to make treats for special events. This is a birthday party for a sweet little girl. Mom chose a fairy theme and it’s breathtaking. We did vanilla bean toadstools and chocolate macarons to accent her already amazing spread. So cute! This makes me happy.”

The name “Soleil,” which means sun in French, is inspired by the Patricks’ travels. In the new bakery, she has handpicked vintage-inspired décor and collected the pieces in the Ocala area except for the banquettes, which came from Miami.

“Military family secret—repurpose furniture because it’s going to get broken in a move anyway,” she shared. “So, all of our furniture is from individuals, thrift shops, Facebook marketplace, etc.”

Patrick and her crew have been hard at work painting and applying the finishing touches at the bakery.

Locals’ artwork adorns the walls, curated with help of NOMA Gallery and Sheerin Artistry. Visitors to the bakery will notice an abstract in the window by Mel Fiorentino, a work depicting “a crazy girl over the couch” by Derek Grimsley and flowers in the hallway by local photographer Leslie Jean Wengler. There are birds from the artist Diane Pierce, who moved here from Michigan and fell in love with Florida’s winged wildlife. The large pieces are oils and the smaller works are watercolor.

Savory foods will be on sale too, but are not yet listed.

“We will have some quiches and avocado toast with the goat cheese from Windmill and we’re working on some focaccias, and we’ll have charcuterie boards from Grated and Cured, which is another local company,” Patrick added.

The bakery also will feature coffee/espresso drinks, beer with gluten-free options, wine and a pet-friendly side patio decked out with bistro-style tables to impart that French-European flavor.

“My team and I will do some teaching,” she added. “I love to teach kids how to make French macarons and how to do anything in the bakery. We’re also hosting Soleil After Dark, which will feature some adult-themed nights. We will make sure we have a sign outside,” she stipulated with a laugh. “We plan to work with artists who might show some more risqué artwork.”

One last thing, she adds: “We will go crazy and go all out on holidays.”

To learn more, go to fb.com/soleilocala/