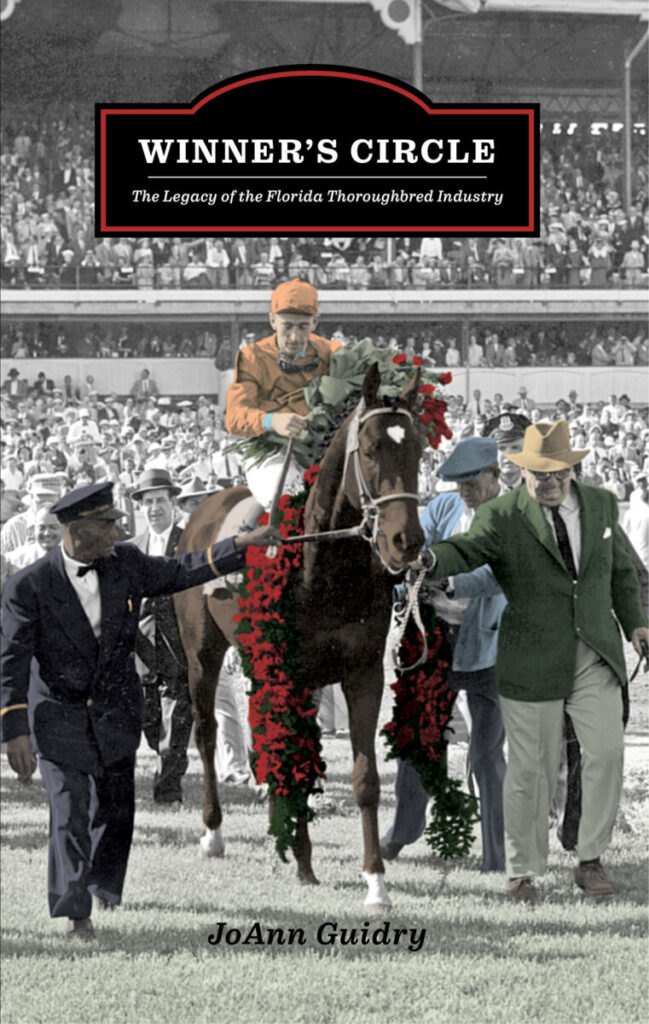 Editor’s Note: This is an exclusive chapter excerpt from local author JoAnn Guidry’s recently-published book, “Winner’s Circle: The Legacy of the Florida Thoroughbred Industry.” This limited edition book chronicles the history of Ocala’s Thoroughbred industry through the stories of the 12 Florida-bred racehorses currently in the National Museum of Racing Hall of Fame and two possible future inductees. Also included in the book is a chapter on Ocala Stud, which was established in 1956 and is the oldest active Florida Thoroughbred operation. In addition, there are chapters on the Florida Breeders of the Year (1989-2021), as well as the Florida Thoroughbred Breeders’ and Owners’ Association and The Florida Horse magazine.

If Needles had done nothing more than become the first Florida-bred national champion in 1955, he would’ve secured his place in the Florida Thoroughbred industry. But that he went on to accomplish so much more elevated him to hero status.

Needles’ accomplishments on a national level brought attention to the still fledgling Florida Thoroughbred industry. He is credited with selling more real estate in Marion County than any other real estate agent of the era. In early 1956 prior to Needles’ Kentucky Derby/Belmont Stakes wins, there were four Thoroughbred farms in the Ocala/Marion County area. By 1958, there were 30. The connection is undeniable and can be directly attributed to Needles’ victory in the 1956 Run for the Roses.

After garnering championship honors as the best juvenile of 1955, Needles wasn’t without credentials going into his sophomore season. Carrying the orange and blue silks of Jack Dudley and Bonnie Heath’s D &H Stable, Needles opened the 1956 season with eye-catching victories in his home state. Trained by Hugh Fontaine and ridden by Dave Erb, Needles showed he was the colt to be reckoned with come the first Saturday in May.

In the $100,000 Flamingo Stakes at Hialeah Park on February 25, Needles displayed what would become his signature running style. He broke 14th in the 15-horse field, galloped along as though he were taking a Sunday stroll through the park, then shifted gears at the top of the stretch to win by two and three-quarter lengths. Coming in second was Gold Ace with Fabius third. Needles’ winning time for the nine furlongs was 1:49 2/5. With the victory, Needles became the first Florida-bred to win a $100,000 stakes race and a major Kentucky Derby prep race.

A month later in the Florida Derby on March 24 at Gulfstream Park, Needles continued with his winning ways. Breaking last, Needles again methodically worked his way through the field to post a victory by three-quarters of a length. Count Chic was the runner-up with Pinter Lea in third. Needles’ running style was deceptive, leading his rivals to think he was a plodder. But his track record-breaking time of 1:48 3/5 for the nine furlongs in the Florida Derby defied that foolish notion.

Needles would go into the 82nd running of the Kentucky Derby on May 5 off those two key prep victories. He was made the favorite of the 17-horse field by the record crowd of more than 100,000 in attendance. Breaking from the number one position, Needles did not hustle out of the gates to take the lead, avoiding being shut out by the large field. Instead, he settled back into 16th place and let Fabius, Ben A. Jones and Terrang battle it out on the lead. Fabius had the lead going into the long Churchill Downs stretch, but Needles was eating up ground the fastest. He powered past Fabius to win by three-quarters of a length in 2:03 2/5 for the mile and a quarter. What was most impressive was that Needles made up more than 20 lengths from the half-mile pole to the finish line.

The shorter Preakness Stakes at a mile and three-sixteenths two weeks later would prove costly to Needles. He ran that race like he ran all of his races, coming from last place and doggedly making up ground in the home stretch. But this time he ran out of track and Fabius finally bested him by a length and three-quarters in 1:58 2/5.

Given a three-week refresher between the Preakness Stakes and Belmont Stakes, Needles came into the last leg of the Triple Crown series as the favorite. There was no doubt that the mile and a half Belmont Stakes was perfectly suited to Needles’ running style. And Needles ran true to form.

It was estimated that he was some 25 lengths back in last place in the eight-horse field. Fabius was winging it on the front end, taking a seven-length lead into the stretch. But it was all for naught as Needles launched his characteristic drive with Career Boy going with him. A tiring Fabius carried Needles out slightly in deep stretch, but he drove on to prevail by a neck over Career Boy. The time was 2:29 4/5, but again what was remarkable was that Needles had made up more than 26 lengths from the half-mile pole to home in the win.

Needles’ victories in the Flamingo Stakes, Florida Derby, Kentucky Derby and Belmont Stakes earned him his second championship title. Named the 1956 North American champion 3-year-old colt, Needles finished the season as the leading money earner in the country with a total of $440,850.

The saga of Florida’s unlikely hero began as a three-mare package deal for $10,000. William E. Leach, who owned Dickey Stables in Ocala, had bought the mares Noodle Soup, Sis Brier and Carol Lee in partnership with Kentuckian Paul Little. When Leach insisted that the mares foal in Florida, Little sold him his shares in the mares.

No one could have guessed that when Noodle Soup foaled a bay colt at Dickey Stables on April 29, 1953, he would go on to become the fifth Derby winner in his male line. Especially since the colt at five weeks old became deathly ill with equine pneumonia. For weeks, Leach’s wife Madeline, who was a nurse, farm veterinarian Dr. Reuben Brawner and horseman Roy Yates tended to the sick colt. He was given so many injections during that time that the suggestion was made to name him Needles.

The newly-christened Needles survived and thrived, going on to win the blue ribbon as a juvenile at the annual Florida Breeders’ Baby Show. Later after watching him work three furlongs at that show, Oklahoma oilmen Jack Dudley and Bonnie Heath paid $20,000 for the colt. And the rest of the story became Florida Thoroughbred history.

As a two year old, Needles won the Sapling Stakes and Hopeful Stakes. He also finished third in the World’s Playground Stakes and Garden State Stakes to bank $129,805 on the season. He was named the champion 2-year-old colt, becoming the first Florida-bred national champion.

Following his championship sophomore season in 1956, Needles started only three times as a four year old. He closed out his career as a winner, capturing the Fort Lauderdale Handicap at Gulfstream Park. Needles retired with 11 wins, three seconds and three thirds in 21 starts with career earnings of $600,355.

Turning down offers to stand him in Kentucky, Dudley and Heath retired their champion to Bonnie Heath Farm in 1958. Needles went on to sire 20 crops, averaging but 15 foals a year. From 317 foals, 294 were starters, 233 were winners and 21 were stakes winners. In 1964, Needles was a leading juvenile sire with 12 winners of 19 races. His best stakes winner was Irish Rebellion, who won the Pan American Handicap and was stakes-placed 15 times.

Pensioned in 1978, Needles lived out his years at Bonnie Heath Farm until his death on October 15, 1984, at 31. A monument marks where his heart and hooves were buried at the Ocala Breeders’ Sales Company complex. The cremated ashes of his body are in an urn housed in the Florida Thoroughbred Breeders’ and Owners’ Association Museum and Art Galley. Indeed, a fitting tribute to Florida’s unlikely hero.

Needles was inducted into the National Museum of Racing Hall of Fame in 2000. 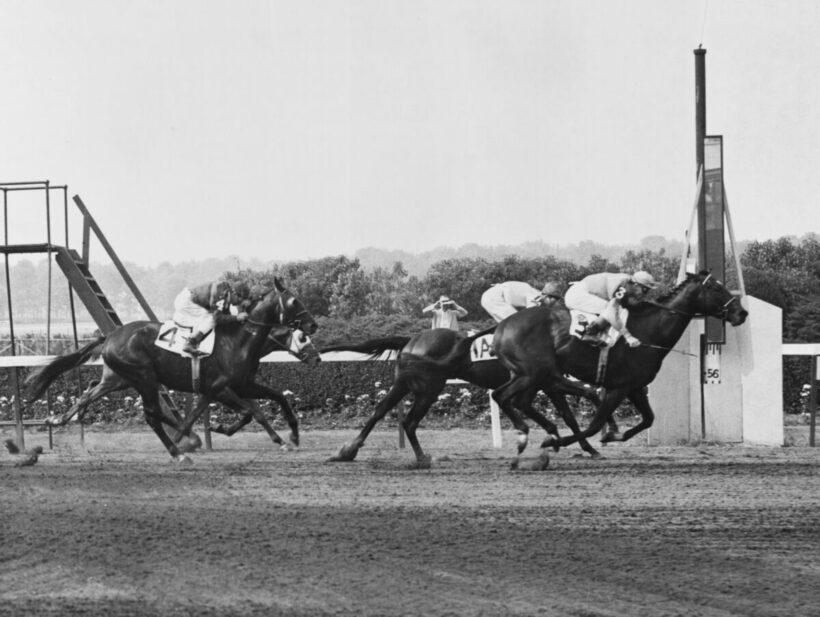