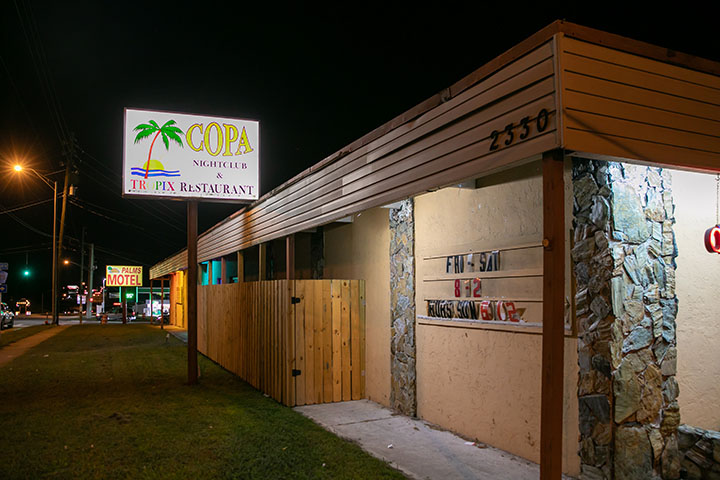 The Copa has been a place of acceptance for LGBT community in Ocala for many years. The building has been sold and club will close soon. [Alan Youngblood/Special to Ocala Style]

The Copa has been a place of acceptance for LGBT community in Ocala for many years. The building has been sold and club will close soon. [Alan Youngblood/Special to Ocala Style]

After 15 years, the only all-inclusive LGBTQ+ nightclub in Ocala, according to OutCoast.com, officially shut its doors on Sept. 30.

The Copa Nightclub located on 2330 S. Pine Ave., was one of the few businesses where the gay community of Ocala and Marion County could gather and find themselves welcomed and supported.

“It was definitely there to support the gay community,” said Reynold Hawk, the original officer of the corporation that owned the Copa, Up and Coming Inc. “And it was a safe haven. Fifteen years ago it was not quite as acceptable in this town to be gay. But now, thank God, the LGBTQ community can go out and go anywhere and be accepted, which is awesome.”

Like many small businesses across the country, the COVID-19 pandemic affected The Copa, but that’s not the only reason Hawk wished to sell the building.

“It’s several reasons,” he said. “I mean it’s just much more frustrating now. You can’t find employees. And that’s one of the main problems.”

Marginalized groups often make their communities wherever they can find them. Bars and local pubs often become the venues of choice.

“The traditional gay bar helps increase visibility and acceptance in a community, and is often the first place someone experiences LGBTQ culture and community,” explained Mary Emily O’Hara, rapid response manager of GLAAD, a national media monitoring organization accelerating acceptance for the LGBTQ community by tackling tough issues and provoking dialogue that leads to cultural change.

“Bars and venues have an important history in the LGBTQ community, as safe and welcoming gathering spaces that are easily identified by locals and tourists alike,” they explained further, acknowledging that many bars closed during the pandemic. “Even as mainstream culture becomes more inclusive and accepting. It’s still vital that we support and maintain LGBTQ spaces, especially when census data shows the community has been disproportionately impacted by financial strain during the pandemic.”

GLAAD doesn’t know the current number of LGBTQ+ bars that have closed during the pandemic, but according to stories in the “Daily Beast” and “Marketplace,” Yelp counted 59 gay bars that closed during 2020 alone.

According to PR Coordinator at Yelp Eric Hernandez, who responded via email, updated closure data for 2021 is not yet available.

While Marion County has become more accepting of same sex couples, it is still difficult for many in the LGBTQ+ community to connect with one another.

“There’s nothing around,” said Ron Decker, owner of Proper Tease Salon. “I’m not saying that there’s prejudice going on but I’ve been here for 30 years and I’ve been gay the whole time and it’s not the friendliest city.”

Decker would sometimes visit The Copa over the years but not often. He clarified that the nightclub wasn’t geared for everybody in the LGBTQ+ community.

Besides the bar and light fare, The Copa had a pool table for those so inclined and frequently hosted drag shows on Friday and Saturday nights.

Daniel Easterday, who lives in Ocala, said that The Copa was the first gay club he ever went to after turning 18. As far as he is concerned, the nightclub did help the gay community in Marion County find a place to go and have fun.

“When I was growing up,” said Easterday, “I always wanted to find a safe place to be myself—and I always chose The Copa. It was my safe space in the early part of my gay adult life.”

Easterday said he would go to The Copa at least a few times a month with friends to watch all the drag shows.

“I think it will be missed by most of us in the community,” he added. “The void it leaves is immeasurable, because it was one of the only gay bars around. It has great memories for those who went there.”

Some in the gay community would like to see bars like The Copa flourish, but like anything else, there has to be consistent demand that allows for the success of such a venue.

“The main reason it’s sad to see The Copa close is because it represents a ‘safe space’ for the community to gather and connect, especially younger members of the community,” says one local gay man who requested not to be named. “Those who make up the LGBTQ community are a diverse group of individuals who come from all walks of life and have varying tastes and ways of socializing.

“Most of the community members I know have their own small social circles and don’t necessarily seek out LGBTQ-specific places,” he added. “They socialize at many of the same bars and restaurants that are popular with straight patrons, because they feel comfortable there or because it’s a great place.”

Now, the community has lost the one outlet—if not exactly tailored for everybody in the LGBTQ+ community—that Ocala had to offer.

Putting it in a more personal frame, Decker offered, “As a gay male, finding somebody to love in this town is harder than finding a cocktail for sure.”