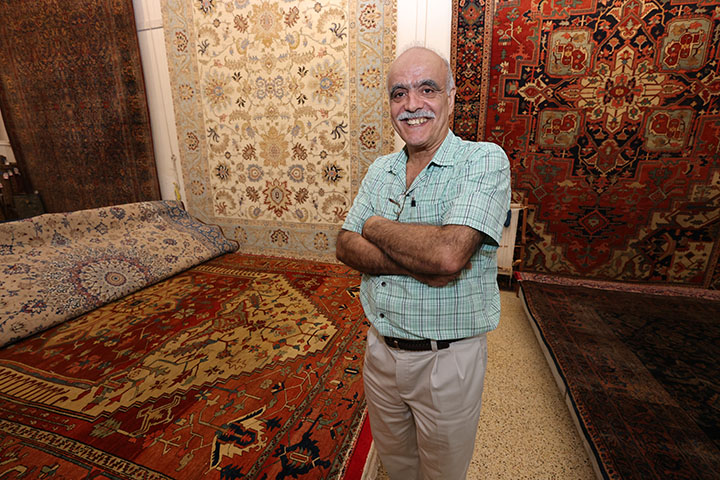 Bahram Assary poses for a photo at Cyrus Rug Gallery on the Ocala Downtown Square in Ocala, Fla. on Monday, Oct. 4, 2021. Assary is a 3rd generation carpet dealer who specializes in selling all styles of carpets from Persians to Afghans, Indian, Russian, Chinese, Pakistani and Tibetan and more. He has been selling carpets at Cyrus Rug Gallery for more than 40 years and has decided to close his store for retirement. [Bruce Ackerman/Ocala Gazette] 2021.

Bahram Assary poses for a photo at Cyrus Rug Gallery on the Ocala Downtown Square on Oct. 4. [Bruce Ackerman/Ocala Gazette]

Bahram Assary grew up learning the ancient art form of Persian rug making from his parents and for nearly four decades he’s shared his love for the craft with residents of Marion County through his well-known rug store.

Now, Assary is retiring and will close his Cyrus Rug Gallery, Inc., a fixture on Ocala’s historic downtown square for 37 years, by the end of the year.

“It is bittersweet; I’m still kind of torn about it,” said Assary, 70. “But I’d like to close before Christmas.”

Assary, a native of Iran, in late 2019 announced plans to retire but, soon after, the COVID pandemic interfered with his plans to liquidate and he decided to delay the store closure until things improved.

“I see that people aren’t as afraid to go out as they were last year,” he said. “Now, I have a short window of time to close.” Assary owns the building at 20 E. Broadway Street and said he’s already leased it to a new undisclosed tenant. He has to vacate the premises by Jan. 1.

The father of three, including a son who helps run the Ocala showroom, said he has roughly 2,000 Persian and Oriental rugs of varying sizes that he hopes to sell during liquidation over the next two months.

The store even boasts two Civil War era rugs; one in excellent condition that he’s selling for more than $100,000 and another one that has some issues but is still serviceable. It is priced at $2,500.

“I’ve always had a great selection of rugs for my buyers,” said Assary, who co-owned 17 other stores with his brother across the United States at one time. “I always had a huge inventory of odd-sized rugs too, including large palace rugs.”

“I was never concerned about what sold and what didn’t,” he added. “I just wanted to make sure I had what customers wanted or needed.”

The art of rug weaving dates back several thousand years, and Assary said most rug-making families, like his, pass their skills and craftmanship down from one generation to the next. His family had a workshop in back of their home when he was growing up.

“It is art form, but it’s also complicated and difficult to do,” he said. “I was born into it and learned it as a child and it became my passion.”

Rug makers rarely write instructions down, preferring to keep their knowledge and know-how within their family circle, and they never disclose trade secrets to competitors, said Assary, a third-generation rug-maker.

“There’s not a lot of written material on how to make a rug,” he said. “Families don’t pass secrets of the trade to other families.”

Assary said his store is unique in that each rug for sale is a curated, one-of-a-kind original made by skilled artisans in India, China and Turkey. The rugs are handmade using natural vegetable dyes.

“We’re the only company that I know of that has done that,” said Assary.

Sadly, rug weaving as a cottage industry is fading fast, with large manufacturers taking over the business. Assary will also be the last in his family to follow the tradition, since none of his three children are interested in learning the craft.

“An average 9×12 rug can sell for several thousand dollars but can take up to 18 months to complete,” he said. “There’s a different mind-set these days; no one wants to spend that long making a rug.”

“We’re also turning into a throw-away society,” said Assary, who immigrated to the U.S. 50 years ago. “Things aren’t made to last anymore.”

Closing his business after such a long successful career is bittersweet for Assary, but he said the time is right.

“I want to go out while I’m on top,” he said. “I have a good name: I’m respected and known for selling top quality rugs.”

Besides the art of rug making, Assary has another passion – the City of Ocala. When Assary first visited the city in the early 1980s, he was immediately smitten.

“The minute I drove to Ocala, I fell in love with it,” he said. “I still feel the same way, it hasn’t changed.”

Looking back on the early days of his business, Assary said downtown was always empty, with few shoppers. Cyrus’ first location was next door to the current store on Broadway Street.

“When I came here, it was a ghost town; nobody wanted to be downtown,” he said. “But it was the cheapest place I could afford.”

“Now, it’s the opposite,” said Assary. “People will fight over a parking spot.”