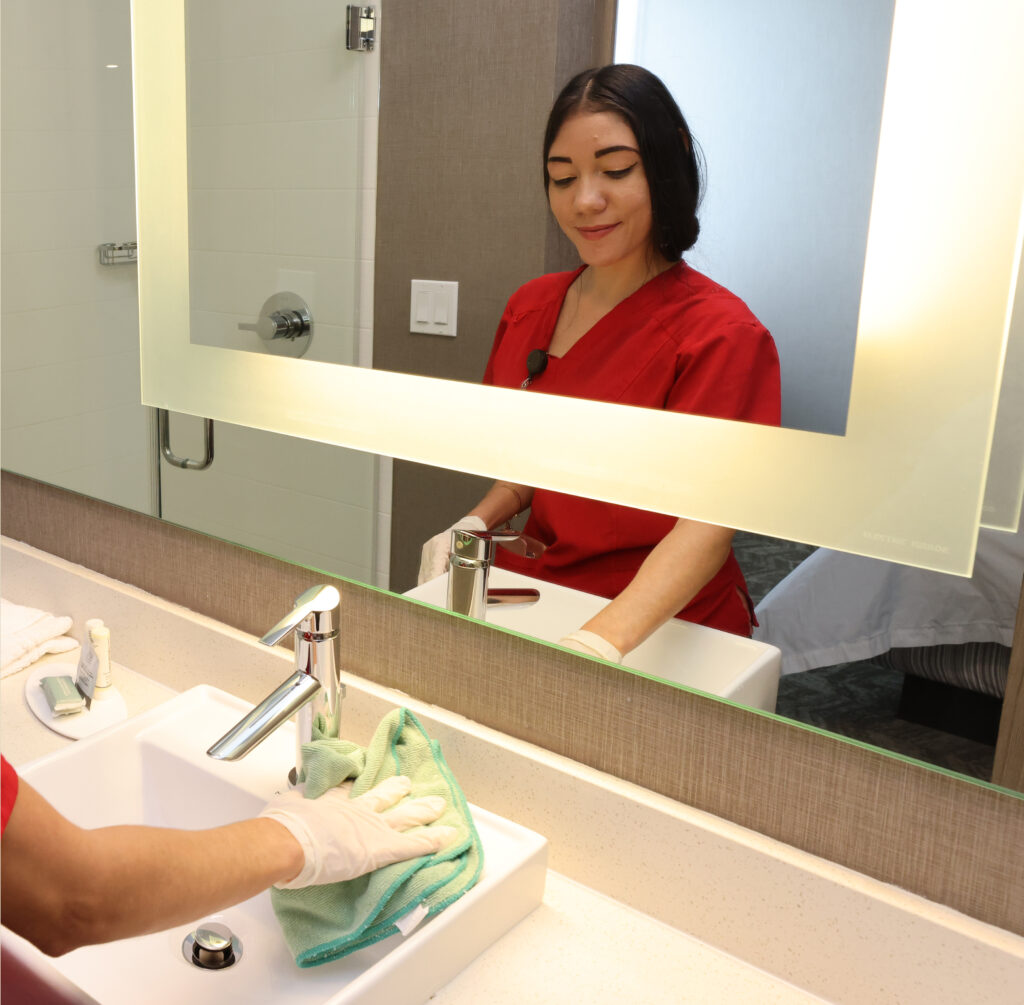 Linda Maldonado works on cleaning a bathroom in a room at the Springhill Suites Marriott in Ocala, Fla. on Tuesday, Oct. 5, 2021. Hotel workers are a large part of the workforce being affected by the minimum wage being raised to $10 an hour. [Bruce Ackerman/Ocala Gazette] 2021. 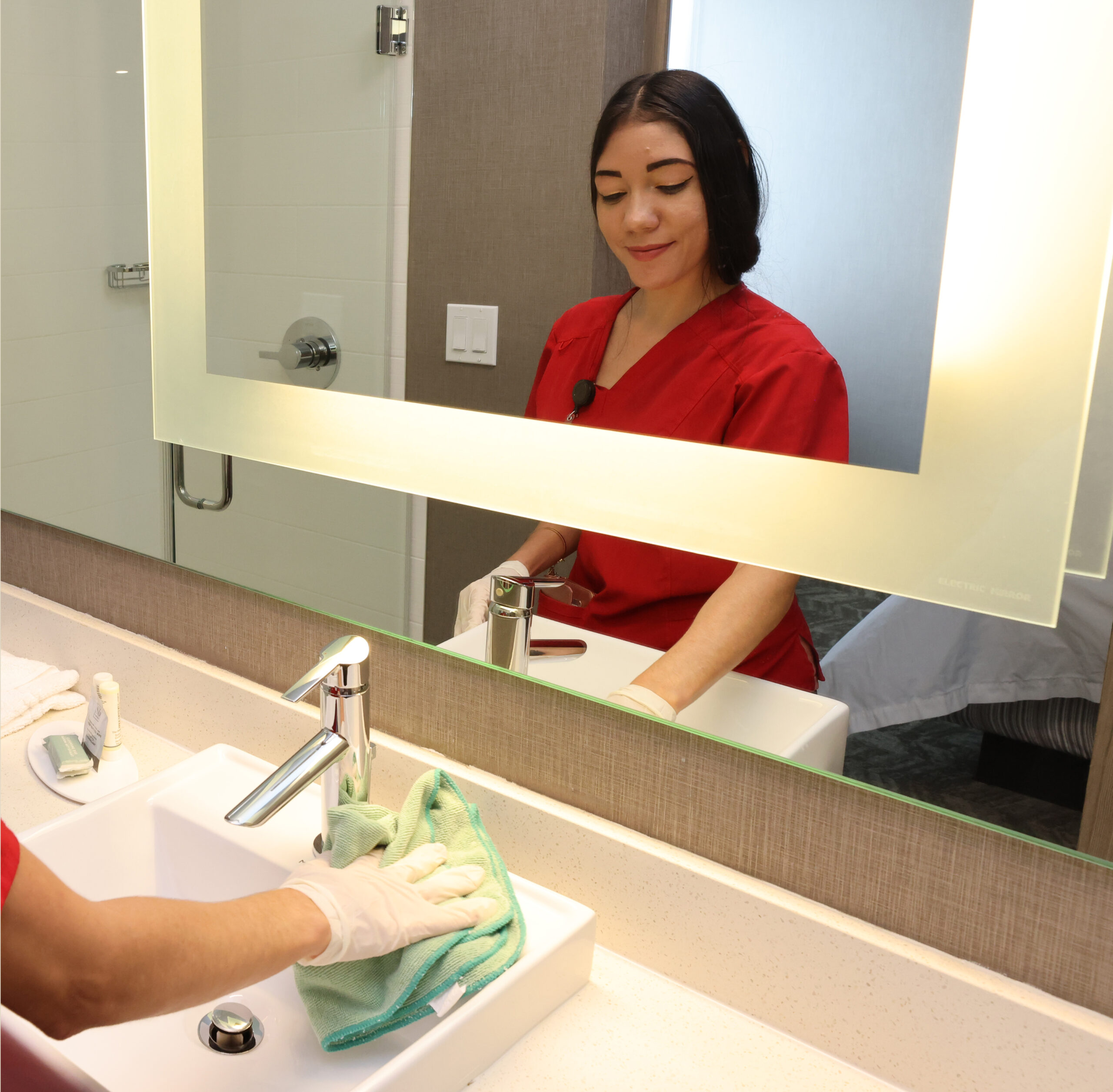 Linda Maldonado works on cleaning a bathroom in a room at the Springhill Suites Marriott in Ocala on Oct. 5. [Bruce Ackerman/Ocala Gazette]

Florida’s minimum wage increased from $8.65 an hour to $10 an hour on Sept. 30—representing the largest percentage increase in the state’s history.

Accordingly, all employers are required to pay employees at least the new minimum rate of $10 an hour or $6.98 plus tips for tipped employees.

It stems from a constitutional amendment to Section 24 of Article X in the Florida Constitution.

Florida last passed a wage amendment in 2004, when 71% of voters raised the wage to $6.15 to be indexed with inflation.

By 2026, minimum wage will have increased by nearly 75% in Florida.

The state’s measure continues to draw praise by supporters, who say it aligns with a need to create a living wage, and sharp opposition from critics, who counter it will damage the long-term economy.

HDG Hotels was one such critic of Amendment 2 in 2020.

As the Sept. 30 deadline loomed, Lisa Lombardo, chief people and culture officer at HDG Hotels, said that the Ocala-based operator didn’t wait but implemented the increase early on instead.

“We were well ahead of the deadline and doing what we could to afford the increases that meant that our tenured people needed to be making near to where the new minimum wage was,” said Lombardo. “We wanted to make sure that we continued to be fair to their tenure with us.”

HDG Hotels always wants to make sure that it is doing right by its employees, said Lombardo, in order to stay competitive with other rates of pay within the industry.

“One of our strategic priorities is to be a preferred employer in the industry and in the communities in which we have a presence,” she said. “So, if there’s a new plan, new rules, we’re going to be there to do all we can to make sure we’re positively impacting our team members, while still being able to take care of the property, take care of our guests and, also, our shareholders.”

Lombardo said that HDG Hotels didn’t just dip into some secret bucket of revenue to make this adjustment to the minimum wage hike happen.

“You have to be extremely strategic and forward-thinking,” she explained. “During [the last year], in addition to the rates of pay, we evaluated our benefits program, and we were able to find a healthier benefits program that costs our team members less. So, you just have to evaluate everything. Our hope was that in finding a more affordable health insurance option for our employees, that didn’t compromise on what it provided, that their net take-home money would again increase.”

HDG Hotels’ position is that a low minimum wage is generally designed for lower-skilled positions, and the company typically hires people with experience and thus, already pays a higher wage rate.

“I think what people need to remember is that minimum wages are just for your folks who have no experience and are in training. It’s a training wage. A lot of us who have healthy cultures and an attractive company, we’re hiring people with experience, which typically means you’re starting them above that entry level rate of pay.”

For companies like HDG Hotels, it was more than just a step up from $8.65 to $10, said Lombardo. It also meant taking on higher costs of doing business.

Its claim is that employers would have to pay higher wages and higher taxes on those wages. As a result, they claim that businesses might be forced to let go of staff they can no longer afford to keep on payroll, cut staff hours or raise the prices of their goods and services. 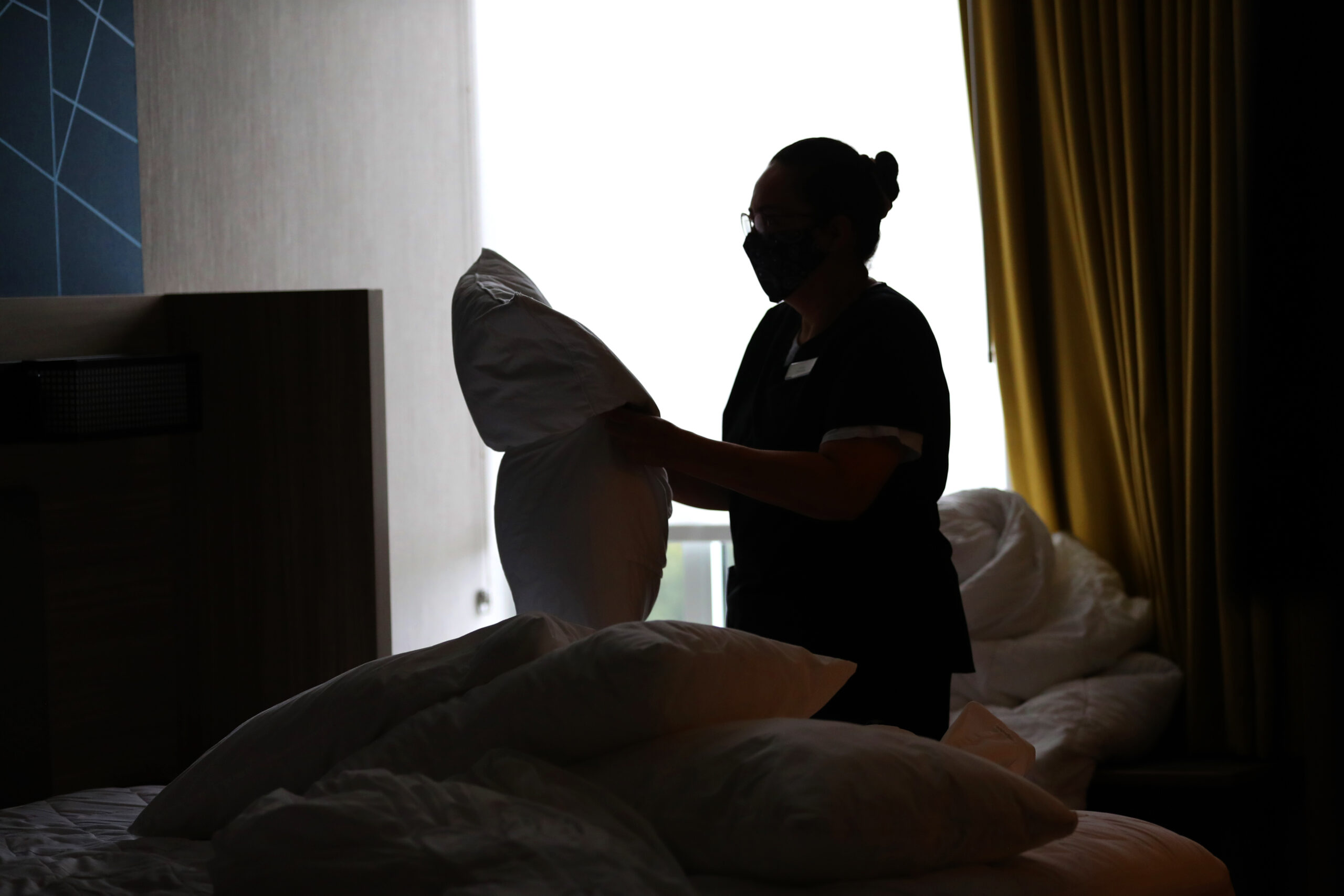 A housekeeper who did not want to be identified, is silhouetted as she makes a bed in a room at the Springhill Suites Marriott in Ocala on Oct. 5. [Bruce Ackerman/Ocala Gazette]

Some industries believe that the rise of the minimum wage will lead to significant profit losses as the hospitality and tourism industries recover from the economic devastation caused by the COVID-19 pandemic.

But Lombardo said the company wouldn’t stop and bemoan the situation. It is what it is, she said.

“We’re going to focus on what we have that we can control and move on,” said Lombardo. “Our mindset has not changed. There’s just a very significant line item that we’ve had to reimagine and recalculate. We’re not going to dwell on that which we can’t control.”

In contrast, no county employees required an increase, as all county employees were above the state minimum wage rate prior to Sept. 30, according to Stacie Causey, public information specialist for the Marion County Board of County Commissioners.

Along with increasing the hourly minimum wage rate, the law requires employers display federal and State of Florida employment law posters where employees can easily view them.

State and federal policymakers continue to debate the details of the issue. In the meantime, business owners throughout the state are contemplating how a wage increase will affect their business plans.

Rondo Fernandez, owner of The Mojo Grill and Catering Company, is afraid that a raise in minimum wage will change the service model.

“If I want good quality staff,” said Fernandez, “I have to pay more than the other guy. To put a minimum [rate] in there doesn’t make sense. We were already trending up on rates. And I think most servers, including our servers, are making pretty good money right now.”

Fernandez said he wonders what the service model is going to look like after the minimum wage reaches $15 an hour. Whatever it looks like, he said, he thinks it’s going to cost jobs.

The Florida Chamber of Commerce estimated job losses as high as 500,000 after Amendment 2 was passed. The Florida Restaurant & Lodging Association said that the minimum wage increase would lead to 158,000 job losses in Florida.

Only more time, and five $1 increases to the minimum hourly rate, can tell for sure.

“We’re going to maybe not carry as many staff,” said Fernandez of the future. “We’re trying to figure that out in the restaurant business, but there’s a fine line of having a successful ship…and crashing.”

Mostly, Fernandez said he fears that the hospitality industry overall will take a hit it cannot recover from.

“I think that hospitality is an artwork,” he said. “I think it’s hard to be a server. Professional serving is something that I’ve done almost my entire life. And I think it’s a true art, I really do. I think with this model, you’re going to see places that are just going to go towards automating things and serving is going to become nonexistent. I really don’t want to see that happen.”