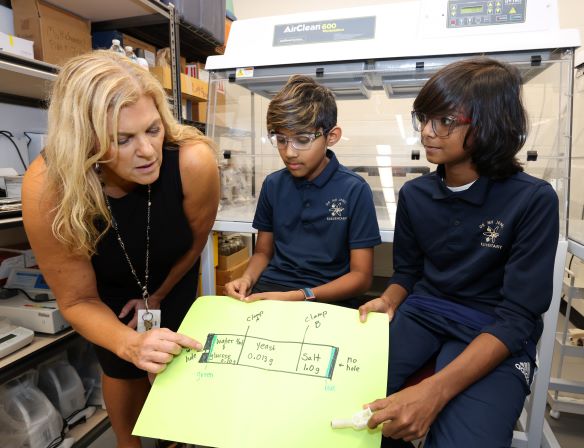 Several Marion County students made final preparations on Wednesday, Oct. 12 to see their very own experiment blast off into space on Nov. 15 for testing by astronauts on the International Space Station.

As a part of the Student Spaceflight Experiment Program (SSEP), students from Dr. N. H. Jones Elementary School won a competition to create a hypothesis that will be tested by astronauts on the ISS. The experiment poses the question of what effect microgravity will have on the amount of ethanol produced by yeast.

On Wednesday, the younger students joined their project counterparts at NMHS to prepare and load the mini-lab experiment, which will launch on from the Kennedy Space Center on a SpaceX rocket through SSEP.

The SSEP is a program of the National Center for Earth and Space Science Education (NCESSE) in the U.S. and the Arthur C. Clarke Institute for Space Education internationally. It is enabled through a strategic partnership with Nanoracks LLC, which is working with NASA under a Space Act Agreement as part of the utilization of the International Space Station as a National Laboratory, according to SSEP.

The students must fit their experiment into a small tube that is 7 inches long and 2.5 inches wide. This tube will then be sent up to the ISS where astronauts will conduct the experiment to see how microgravity affects the fermentation of yeast. The project will be in orbit for six to eight weeks before returning back to Earth, and in the meantime the students will conduct the same experiment on Earth as a control. They will then compare the results from both tests and analyze them to finish the project, Dorsey said.

“They are just really excited about learning about science and possibly space,” Dorsey said. “There’s so much opportunity, especially in Florida with the space program here.”

Dorsey said this project has given her students experience with the scientific method that is invaluable and doesn’t happen in a regular classroom. The students had to run trials and alter their research question based on those results, she said.

“We’ve learned that the scientific process is nothing like a science fair project because nothing ever goes right,” she said. “It took us 100 trials, no joke, to get an answer.”

Dorsey said her and her students’ excitement is palpable, and they can’t wait to see all of their hard work pay off, both on launch day and when the experiment is complete several weeks later.

“Perseverance—that’s what they learn,” Dorsey said. “It really does take a lot of hard work and you really do have to keep trying.”