School board debates procedure on recording minutes of meetings 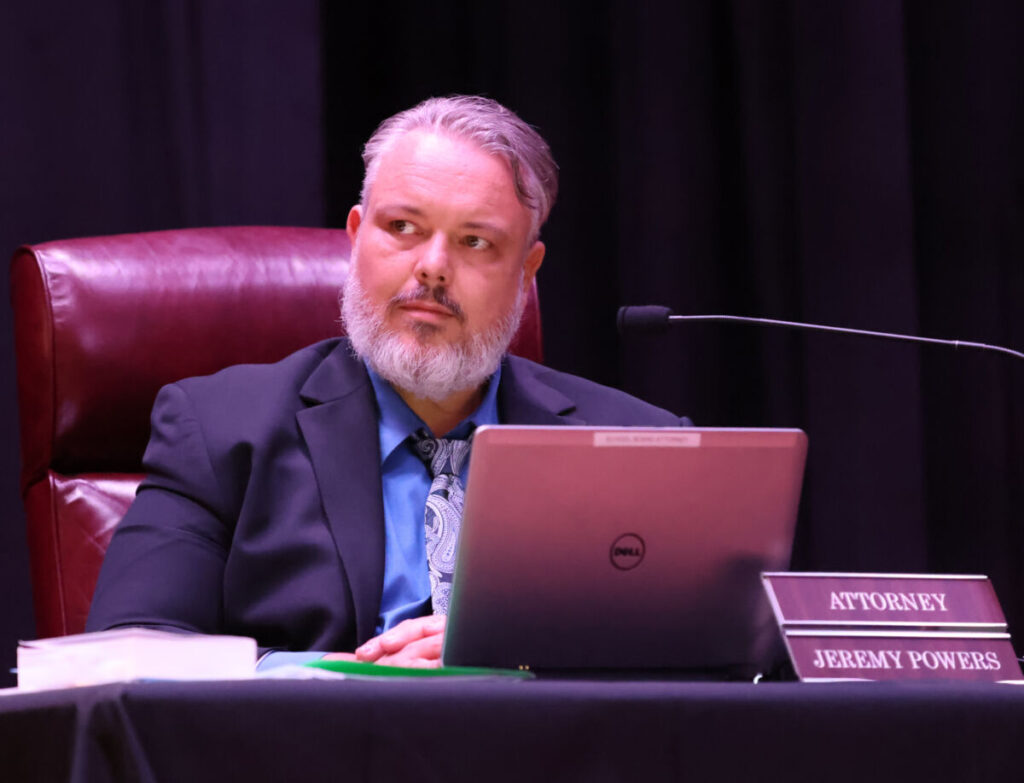 File photo: Attorney Jeremy Powers listens during a meeting of the Marion County Public School Board at the MTI auditorium in Ocala, Fla. on Tuesday, April 26, 2022. [Bruce Ackerman/Ocala Gazette] 2022.

Approving the minutes from previous government board meetings is typically a perfunctory task. For the Marion County School Board, not so much.

On Tuesday, Oct. 11, the board spent nearly 45 minutes sorting out questions about the minutes, especially, how and whether their comments should be captured for the record. The discussion involved guidance from both Florida law and Robert’s Rules of Order.

At issue was whether the board secretary needed to continue recording the sometimes lengthy discussions or commentary put forth by the board members, and then include this content in the official school board minutes.

School Board Chair Eric Cummings and board member Kelly King were in the less-is-more camp.

“When we get into lengthy commentary or lengthy board comments, it gets to the point where you’re asking the person that’s taking the minutes to interpret all of the commentary,’’ Cummings said. “The person trying to take the board minutes is not a stenographer, that’s not their job. They’re supposed to take, according to the law, the minutes of those things we have voted on and that discussion.”

He continued, “If every board member wants to provide a written copy (of their comments), that’s the privilege that you’ve taken to make sure that your commentary is memorialized in the minutes.”

School board attorney Jeremy Powers spelled out what state law says on the matter:

Under Florida statute 1001.42 in section 1(b): Minutes, Contents: The minutes shall show the vote of each member present on all matters on which the school district board takes action. It shall be the duty of each member to see to it that both the matter of his or her vote thereon are properly recorded in the minutes. Unless otherwise shown by the minutes, it shall be presumed that the vote of each member present supported any action taken by the district school board in either the exercise of, violation of, or neglect the powers and duties imposed upon the district school board by law or rule, whether such action is recorded in the minutes or is otherwise established.

“Robert’s Rules of Order indicates that as to rules for minutes, the only things required and in fact recommended … are that we must include the title of the group, date, time, venue, names of attendees, the person recording and a copy of the agenda. The advice given … is do not record the debate or discussion, only the outcome.”

Powers noted that both Florida law and Robert’s are in agreement.

“I would advise moving away from a model which tries to record every aspect of every comment,’’ he said, “because that becomes unwieldy and it will necessarily be incorrect unless there is a direct word-for-word transcription taken.”

School Board Vice Chair Allison Campbell questioned the timing of the discussion on changing the board’s procedures.

“After hearing attorney Powers explain, I understand it a bit more, but frankly I am interested in why the shift now,’’ she said. “In my opinion, there has been value through the years of being able to see when something was originally addressed and how it became an agenda item or how it transpired throughout a process.”

Board member Don Browning indicated he saw no reason to make a change.

“This must not stand because it would meet the test of management vs mismanagement,’’ he said. “I am not in favor of scrubbing it. I believe this is a gross mistake for the board’s communication and that we must have a workshop on this issue and have it be decided in a considered way.”

After the lengthy discussion, the board voted to approve of the minutes from their meetings on July 26 and Aug. 9 and the work session on Aug. 4.

Board member Nancy Thrower was absent from the meeting, however, and the remaining four members were split on the matter of minutes. They will decide at a later date how to handle the board members’ comments and whether they will be placed in the minutes.