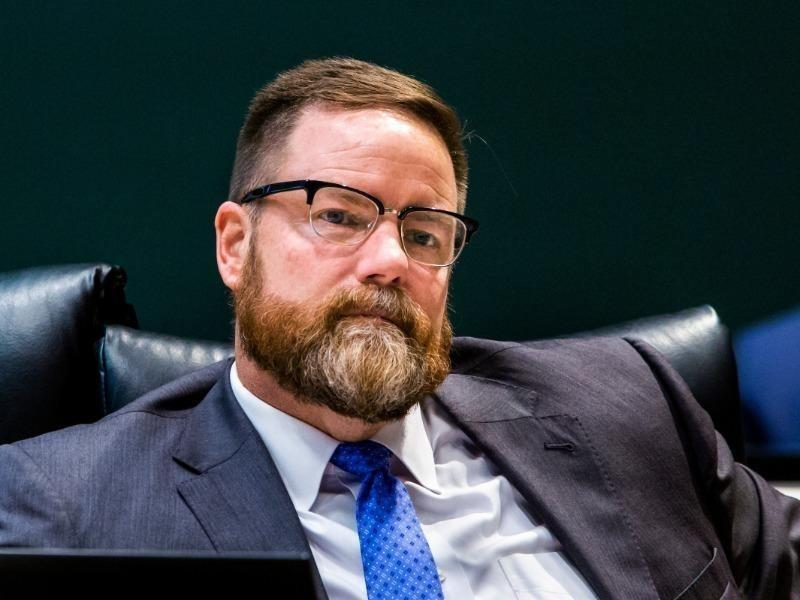 Sen. Aaron Bean, a Republican from Fernandina Beach was one of those critical about the lack of clear communication from the state on the COVID-19 vaccine rollout plans. [News Service of Florida]

Sen. Aaron Bean, a Republican from Fernandina Beach was one of those critical about the lack of clear communication from the state on the COVID-19 vaccine rollout plans. [News Service of Florida]

Sen. Aaron Bean, R-Fernandina Beach, said during a meeting of the Senate Health Policy Committee that there is statewide frustration over the vaccine rollout and that Rivkees and Department of Health Assistant Secretary Shamarial Roberson need to provide the public with a “clear direction” about the state’s plans.

“If there is an orderly process that is clear and communicated well, most people are patient — they will wait their turn and know that new supplies are coming. And I can wait my turn. But when there’s no information, and there’s no rhyme or reason who’s getting it, that’s the frustration,” said Bean, who is a top lieutenant of Senate President Wilton Simpson and chairs a panel in charge of the health-care budget. “So when you leave here and have a debrief of your meeting today, please talk about there’s great frustration over lack of communication.”

Bean said the Nassau County Commission was slated to have an emergency meeting on  Wednesday to discuss vaccination efforts. Bean, who represents the county, said thousands of people signed up through a Nassau County website to get vaccinated but there was no supply.

Given the math, Rivkees told members of the Senate Health Policy Committee that “it is going to take a while” to get all those who qualify vaccinated. Therefore, he said the message that needs to be delivered is patience.

“How you convey patience during a pandemic is a very difficult conversation to have. Frankly, it’s heartbreaking,” Rivkees, who doubles as secretary of the Department of Health, said.

According to the federal Centers for Disease Control and Prevention, 29.38 million doses of the Pfizer and Moderna vaccines have been distributed nationwide. Florida has received 1,680,200 doses, according to a CDC tracker. A separate state health department report showed the state had administered 707,428 doses as of Tuesday and that 61,158 people had received the required two doses.

Meanwhile, the number of people who have contracted COVID-19 continues to increase significantly. Florida on Tuesday topped 1.5 million reported cases of COVID-19 since the pandemic started early last year, and at least 23,396 Florida residents have died.

While the approval of the vaccines has ushered in new promise in the fight against the spread of COVID-19, supplies have been limited. Initially, the vaccines were targeted at front-line health- care workers and staff and residents of long-term care facilities. DeSantis’ Dec. 23 executive order expanded eligibility to people 65 and older and all health-care workers with direct patient care. Additionally, the executive order gave hospitals the ability to vaccinate people they deem to be extremely vulnerable to COVID-19.

The DeSantis administration asked hospitals, along with county health departments, to take the lead on vaccinating the public. But the state provided no blueprint for the hospitals to follow, and the state’s rollout efforts have been widely criticized as botched. To help bolster the effort, DeSantis has enlisted Publix supermarkets in several areas of the state.

The Senate Health Policy Committee met for the first time this year on Wednesday, and the meeting was the first opportunity for senators to ask top state health-care officials pointed questions about the rollout efforts.

But Rivkees avoided directly answering most of the questions.

Sen. Lauren Book, D-Plantation, asked Rivkees what percentage of people in the state needed to be vaccinated to achieve community immunity and when he thought the goal would be reached.

“At the present time, we are still looking for guidance from the CDC for what they define the vaccination coverage will need to be to achieve population immunity,” Rivkees replied.

Noting that more than 22 million people live in the state and considering the current number of people who have been vaccinated, Sen. Ben Albittron, R-Wauchula, asked Rivkees whether it’s “fair to say” that it would take 22 months to get shots into the arms of everyone who agreed to be vaccinated.

Rivkees didn’t directly answer, saying he was hopeful that additional vaccines would receive emergency approval from the federal government.

“When we’re looking at talking to people back home, being realistic with them matters. Because if not, they’re not going to believe us the next time,” Albritton told Rivkees. “A million doses a month, 22 million people, that’s a maximum of 22 months. And the hope is additional inflow reduces that timeline. Is that fair to say?”

Rivkees avoided answering the question a second time and said he thought the federal government would approve additional vaccine candidates for emergency use.

Rivkees said he’d be “very surprised if we are in a situation where the only two vaccines that we have are going to be the current ones available.”