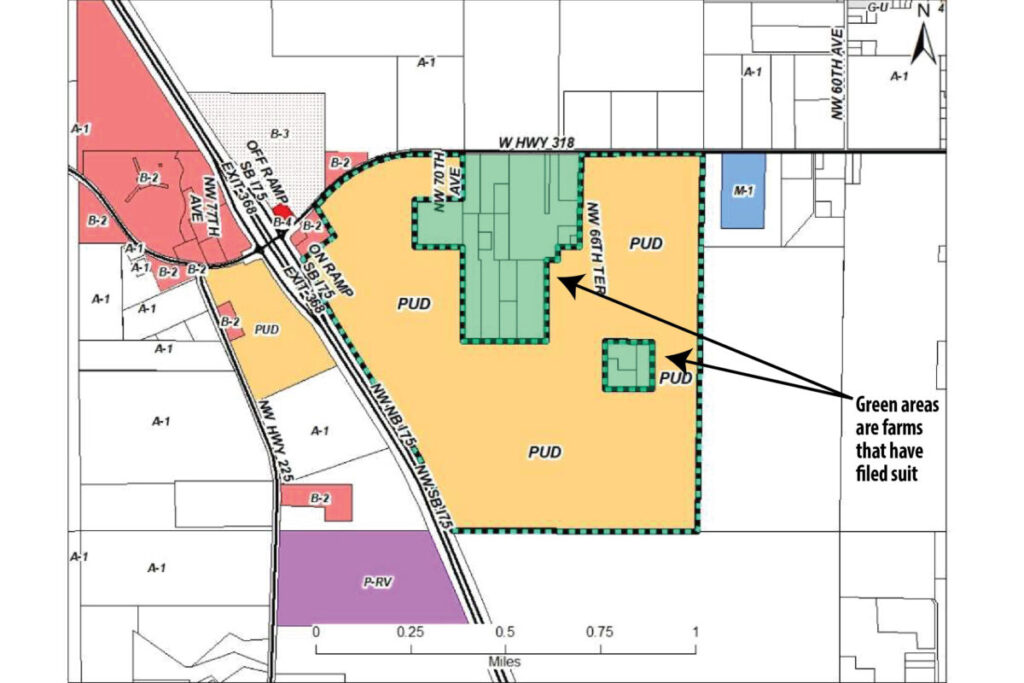 When the Marion County Board of Commissioners (MCBOC) voted 4-1 on March 1 to approve a request by B. Smith Hialeah, LLC to rezone agricultural land to industrial and commercial, no one stood to be impacted more than 11 Black farmers who would be surrounded by the industrial complex the developer called Sunny Oaks.

The farmers have since joined forces with a local farm preservation group called Save Our Rural Area (SORA) and filed suit on March 31st against Marion County. The suit alleges the county is allowing illegal “spot zoning” and claims their rights to due process were violated because the board only gave them two minutes during a commission meeting to raise their objections.

The farmers’ complaint points to the “4 million square feet (greater than the size of the Pentagon) of incompatible commercial warehouses” and a possible “adjacent wastewater treatment plant that would be taller than their homes,” in support of their claim that the county has made inconsistent zoning decisions.

The farmers’ complaint explained spot zoning this way: “Spot zoning is a zoning action that gives a small area privilege which are not extended to other land in the vicinity. Spot zoning is not allowed when it solely benefits a particular property owner or leaves a veritable island surrounded by incompatible zoning. Spot zoning generally connotes zoning in favor of a few at the expense of the general community, or isolated and unrelated zoning legislation. For example, a change that would permit a commercial building in a residential area constitutes spot zoning and vice versa.”

This is the second lawsuit filed against Marion County related to the same property.

The first lawsuit, filed in 2014 also by SORA and few others, alleged the county did not provide adequate notice of its intention to enter into a developer’s agreement. That suit has remained dormant since November 2015.

Attorney for the farmers, Ralf Brookes, explained the difference between the two suits. “The first suit was about a developer’s agreement; the second suit is about rezoning.”

The Sunny Oaks industrial plans were approved by the MCBOC on the same day that the commission agreed to transmit a comprehensive plan text amendment to Tallahassee for state review and comments related to the World Equestrian Center’s plans for the old Ocala Jockey Club (OJC), which is also off 318.

The plans for the old Ocala Jockey Club include homesites as small as three acres, an RV park, a gas station, hotel, arenas, retail and restaurants.

The two proposed developments have at least five things in common. Both are inside the Farmland Preservation Area and outside the Urban Growth Boundary and both have the potential to significantly impact traffic on Interstate 75 and Highway 318. Sunny Oaks plans for a wastewater treatment plant could service the old OJC property. And finally, both developers share the same engineer, David Tillman, president of Tillman & Associates Engineering.

According to Stacie Causey, spokesperson for Marion County, there are 11 different agencies at the state level that will review the county’s proposed comprehensive plan amendment. As of April 11, only five agencies had responded. Two of them, the State Department of Agriculture of Consumer Services and the Florida Department of Transportation, both gave no objection to the plans.

The Florida Department of Environmental Protection did raise some concerns in its response to the county.

“The location of the proposed Future Land Use Map amendment is within the Rainbow Spring Group and Rainbow River Basin Management Action Plan (BMAP) and spring shed boundaries of the Rainbow Spring Group (which has been identified as an Outstanding Florida Spring). Activities associated with the proposed project have the potential to impact water quality. If adopted, appropriate measures should be taken to minimize any potential additional nutrient loadings to the spring(s), including the proper treatment and disposal of wastewater and stormwater in accordance with BMAP requirements. Any additional loading to the basin will be evaluated and may require additional restoration actions by the County if deemed necessary.”

Jerome Feaster, founder of SORA, told the Gazette that attorney’s fees for the suit are being paid for by the 11 farmers and other local residents active in SORA who, he said, feel the need to fight the development threat at their doorstep before it swallows up more of the farmland.

“We are fighting for these farmers to maintain the way of life they’ve had for generations,” said Feaster.