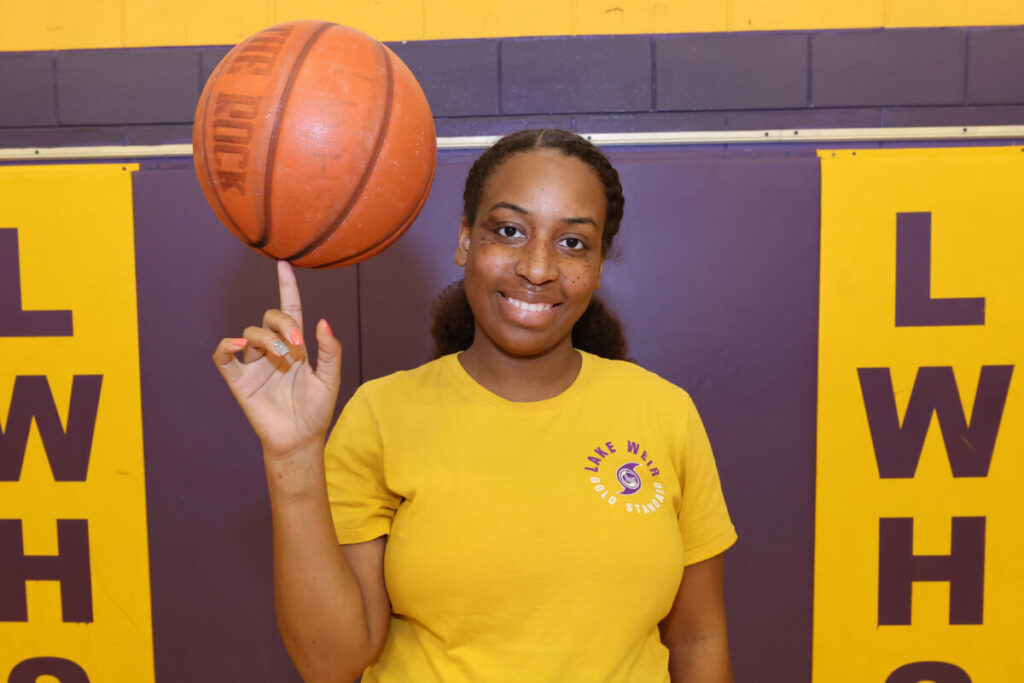 Basketball has been a huge part of Briana Smith’s life for as long as she can remember, and now it is her turn to teach the game as she takes over the head coaching job for the Lake Weir High School Hurricanes girls varsity basketball team.

Smith, 31, grew up in Clarksville, Tennessee with her parents and younger brother. Early on, she  was into ballet and tap dancing. Then she tried basketball and immediately found a passion for the game.

“Once I started playing basketball, I fell in love with that,” Smith said.

Smith and her younger brother were like most kids before the rise of social media, spending most of their free time outside playing sports and other activities. Smith recalls middle school being the time when she started to take basketball seriously.

“My dad would be working with me outside,’’ she said. “Once I got into middle school, I was doing full-time training outside of practice to improve my skills.”

Smith attended Kenwood High School and played varsity basketball all four years and tennis during her junior year. After graduating from Kenwood in 2009, she moved on to Morgan State University in Baltimore.

Smith graduated from Morgan State in 2013 with a bachelor’s degree in psychology. A year later, she got a master’s degree in health and human performance. Coaching became a path soon after college graduation when she was helping at development camps for middle and high schoolers in Tennessee.

“I was able to help younger kids develop a skill and develop different fundamentals by putting two-and-two together to figure out the why behind doing things,” she said.

Smith got her first official coaching job as an assistant at West Creek High School in Clarksville from 2016-2018. She became pregnant with her daughter Trinity, which led her to step away from coaching and move with her family to Ocala in 2019.

Smith soon was hired as the coach of the Lake Weir Middle School girls team and as a teacher at the school. The Tennessee native said her experience in the classroom has helped her become a better coach on the court.

“It’s honestly about getting to know your students’ strengths in the classroom,’’ she said. “It’s knowing what helps them to learn and understand different concepts and what helps them connect different things together.”

The same strategies apply to the court.

“It’s no different in basketball, you have to know what they are good at and what they need work on,’’ she said. “It breaks down to building a relationship and being around them enough to be able to pick up on those strengths and weaknesses. There are a lot of parallels between the classroom and coaching.”

Smith, a U.S. and World History teacher at Lake Weir High School, is now interacting with older kids. She finds value in building those relationships early to get buy-in from her players.

“I was hired in late April or early May of the school year (2021-2022) and thankfully I was able to be around for summer workouts with the team and get to know some of the returners and see where they are at skill-wise,” she said.

“Coming into a program where there’s been a new coach every season, I wanted to build a relationship with the upperclassmen and get them to understand how I am as a coach,’’ Smith said. “I wanted them to get an understanding of what I expect with effort, work ethic and character.”

As Smith continues to build the players’ trust and get them prepared for the season, one person who she knows she can count on is her husband of six years, Micah.

“My husband is super supportive,’’ she said. “We have a system of how we take care of our daughter because we both work, and she is in daycare. He will come and help at times with the team, he has crowned himself ‘team dad’. He’s extremely supportive and it’s much appreciated because I could not imagine juggling having a toddler, working and preparing for another child.”

Smith said she and her husband are expecting their second child in February.

Parenting, like teaching, has parallels to coaching and the lessons that can be learned. For Smith, raising her daughter has taught her that communication is key with children, no matter what age.

“Communication is everything,’’ she said. “My daughter is 3 and she is starting to make sense of different things and processes things differently. Being able to communicate things in a way where she can understand it and grasp whatever I’m trying to get her to understand has been a huge lesson I can take with me to the classroom and the court.”

The Lake Weir girls basketball team has finished with a winning record in two of the last three years, and Smith is looking to keep the ball rolling on the court. Off the court, Smith wants her players to become well-rounded individuals who can be successful in life.

“I want them to grow as people. I have a lot of upperclassmen and there are so many different leadership and communication skills that I want them to pick up on. I want them to be successful in whatever they choose to do, whether that’s involving basketball or not,” she said.

Smith has the opportunity to follow in the footsteps of the coaches who played a part in molding her to become the dedicated, determined leader she is now.

“I want to leave an impact of expecting maximum effort but also supporting them in anything outside of basketball,’’ she said. “They are so many different things these kids have to deal with now, and I don’t want them only to think of me as a no-nonsense coach.

“I am truly in their corner,’’ she said. “If they need someone to vent to or they are having a difficult time processing a situation and don’t know how to deal with it, I can hopefully present a different angle looking at it where they are not reacting impulsively but being able to take time and think about what options there are in a situation.”

Smith and her team opened their season on Nov. 14 with a 49-40 win on the road against Springstead High School (Spring Hill).