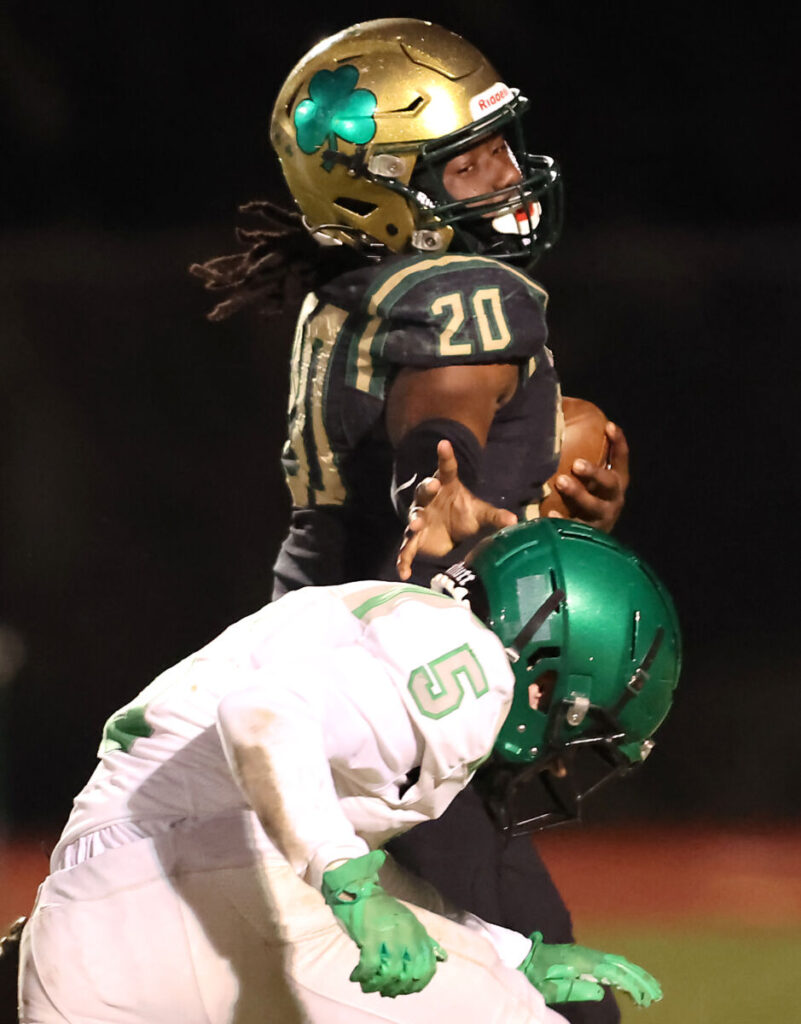 The Trinity Catholic Celtics hosted the Father Lopez Green Wave in the first round of the Class 1-Suburban playoffs on Friday night.

After a three-week layoff, Trinity Catholic was eager to hit the field and they produced positive results at a rapid pace to start the game. Father Lopez attempted an onside kick to open the game and Trinity Catholic recovered the ball at the 50-yard line.

Trinity Catholic running back Beau Beard carried the ball four consecutive plays and gained all 50 yards on the opening drive before scoring on a 5-yard touchdown run to give his team a 7-0 lead just 90 seconds into the game.

Trinity Catholic’s defense would once again come up with a stop and force a punt. On the ensuing drive, Beard would gain 33 yards on the second play and punch it in for his second touchdown of the night just two plays later.

With Trinity Catholic up 14-0, the defense could be aggressive and apply heavy pressure to Father Lopez quarterback William Tucker. A sack and a near interception would lead to a third consecutive punt for the Father Lopez offense.

Following a punt from the Trinity Catholic offense, cornerback Courtney Patterson would intercept Tucker on third-and-10 and return it 35 yards for a touchdown to extend the lead to 21-0 with nine minutes left in the second quarter.

Trinity Catholic head coach John Brantley II has seen the potential and consistent improvement each week from his defense. They would not allow a first down until the fourth quarter allowed less than 100 yards on the night.

“Defense wins championships and every championship we’ve won around here has included a good defense. This defense has had its moments and it has a chance to be real good.” Brantley said.

Father Lopez had an opportunity to bounce back from the pick-six but a false start flag put them behind the eight ball and were forced to punt for the fourth time in five drives.

On the first play of the following drive for Trinity Catholic, Beard had a gaping hole in the middle and ran straight through it for a 55-yard touchdown, his third touchdown of the first half. The senior finished with 145 yards and three touchdowns on only eight carries. Beard credited his offensive line with giving him plenty of room to run and said that the communication and chemistry between him and the offensive line is a big part of their success.

“Every day in practice we talk about what can be worked on, during the game were on the sideline watching film and see what we can improve on. When we work on that in the game and the holes open up, the game slows down and if I hit it right, then I’m gone.” Beard said.

Another punt from the Father Lopez offense gave the Trinity Catholic offense superb field position and running back Jamarkus Starkes supplanted Beard and scored from three yards out to give his team a 35-0 lead with three minutes left before halftime.

Father Lopez final drive of the first half ended after two plays when senior David Abate sacked Tucker and forced a fumble.

Father Lopez would have their best drive of the night to open the third quarter when Ginochetti took a reverse run play 50 yards down the right sideline for a touchdown to avoid a shutout. Trinity Catholic brought in backup quarterback Alan Means on the following drive and Means promptly threw a 29-yard touchdown pass to junior tight end Mekai Griffin.

The Trinity Catholic defense picked up its second turnover of the night on an interception from senior cornerback Deshawn Shelton and freshman running back James Pullings scored his first touchdown on a 10-yard run to cap off the 56-6 win.

According to head coach Daniel Fish, the Father Lopez football program was in danger of not fielding a team this season because they had just 17 players on the roster in the spring. Fortunately, many new faces joined the roster via transfers and incoming freshman.

“We’re a young bunch and we’re excited to build for the future and hopefully be able to compete in these games. They predicted us to go 2-8 this season and no one gave us a shot this year, but we were able to punch our ticket to the playoff.” Fish said.

Fish is optimistic about next season and looks forward to getting the opportunity to play Trinity Catholic again in 2023.

“Try to run it back next year, we know we’re probably going to end up either on this field or playing this team at our field at some point next year during the playoffs. These young kids are workers, resilient and talented, so I’m hoping we can continue to build and add a little more to it by going deeper and deeper into the playoffs each year.” Fish said.

Coach Brantley commended his team on their focus following the long break but said he knew they were ready to go out and perform at a high level.

“I was a little concerned because we had not played in three weeks but they practiced well all week and I knew we were ready to play tonight.” he said.

Trinity Catholic will now move on and host district foe P.K. Yonge next Friday in the regional final, Trinity Catholic beat P.K. Yonge on Oct. 28 to win the district championship. The previous win gives the team confidence but Beard and his team know they can’t look past anyone in the playoffs.

“I’m confident but we can’t get a big head, we have to work hard this upcoming week in practice.” Beard said.

For Brantley, it comes down to worrying about his own team and how they practice. Back at the media day in August, Brantley said he knew it would be a good season if they were still practicing on Thanksgiving, his team will be doing just that on Thursday morning.

“I tell them I’m only worried about Trinity Catholic and what we do. We just have to do what were supposed to do.” Brantley said.