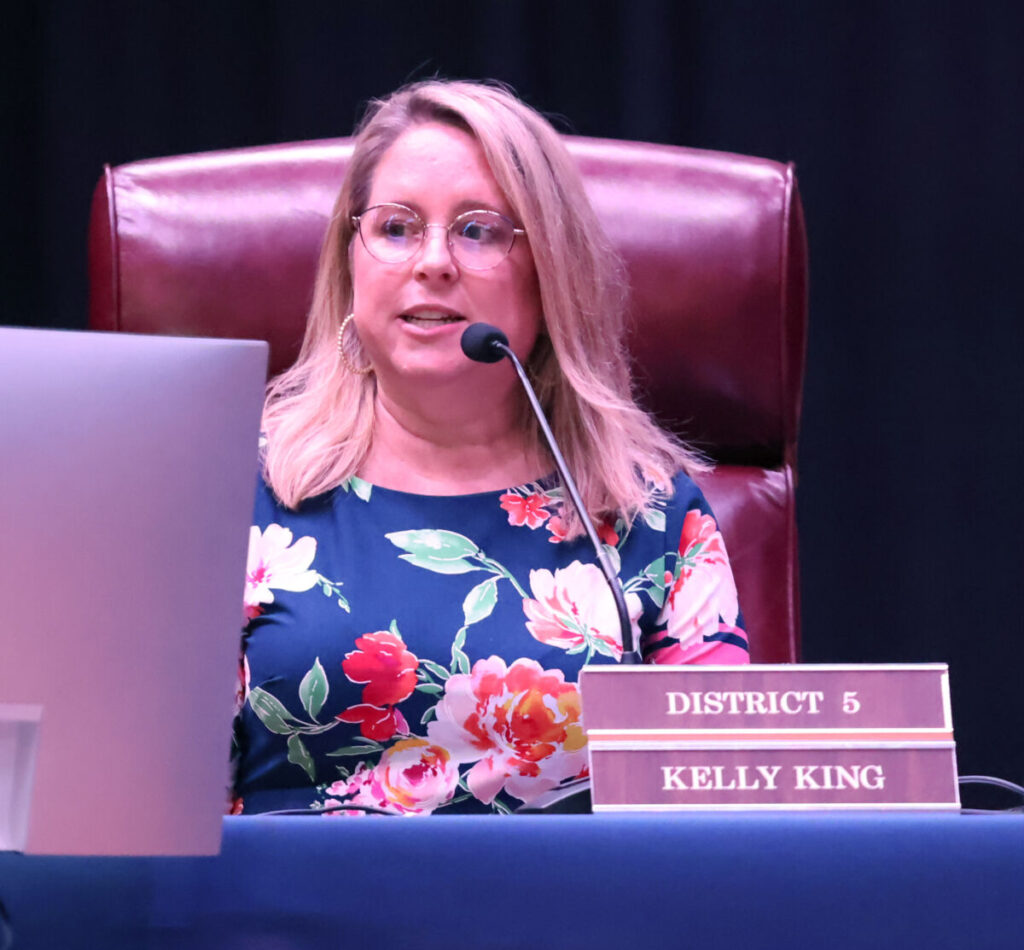 File Photo: Kelly King of District 5 speaks during a meeting of the Marion County Public School Board at the MTI auditorium in Ocala, Fla. on Tuesday, April 26, 2022. [Bruce Ackerman/Ocala Gazette] 2022.

Some people suddenly found themselves out of a job in July when the School Board of Marion County adopted a policy that barred many young people from substitute teaching–at a time when the Marion school district, like every other one across Florida, is in dire need of teachers.

After hearing from young people who have served as substitute teachers in Marion schools, the board on Aug. 9 passed a resolution ensuring anyone with the proper qualifications can teach in the new school year, as long as they are at least 18. Language in School Board Policy 3120.04 required elementary school substitute teachers to be at least 20 years old; for middle or high school, the minimum age was 22.

The age restriction was passed and adopted into the policy on July 12 of this year when the board hosted a public hearing to update and revise a number of its policies. Board member Kelly King brought concerns over the policy to the board’s attention at the previous administrative work session, where she stressed the importance of allowing every qualified person to teach, at a time when the district and state are so heavily impacted by a lack of educators.

She emphasized that the teacher shortage was not the only reason she wanted to change the policy.

“I have full confidence in the former students who are substitute teachers who have worked so diligently and so hard to get their degrees and they have shown interest in these goals,” King said. “I would never vote on anyone being in front of our students just to have a body there, but only because they are fully competent and worked hard to be there and want to be there.”

In addition to the amended age requirement of 18, all substitute teachers are required to have obtained a high school diploma or equivalent along with five years of verifiable work experience, or instead have an associate degree or 60 hours of college credit. They must also have experience in a classroom or have completed a training program to learn equivalent skills. Applicants for substitute teaching must also go through fingerprinting and background checking for Level II certification, as well as pass drug testing, according to board policy.

Before voting to revise the policy, the board heard from several young educators who shared their experiences in local classrooms as well as their career aspirations.

Daniela Florian, 19, said the higher age limit would hold her back after she worked so hard to earn her associate degree through the dual-enrollment program offered in Marion County.

“The students have gotten to know who I am, and they’ve expressed to me that they feel glad to see younger faces substituting in their classes,” Florian said. “They feel comfortable enough to speak to us about either school or college, if they’re going to be graduating soon.”

Florian said her age also helped her better empathize with the students and teach them effectively, since she was in their shoes not that long ago.

“I graduate with my bachelor’s (degree) next year, and although my major is far from education, in my time being a substitute teacher I’ve grown to love teaching and spending time with the students,” Florian said. “It’s changed my career path. I have hopes of becoming a teacher for this county at 20 years old, unless there’s an age restriction placed on that, too.”

Another substitute teacher, Daniel Baker, served as a teacher primarily at the high school level. Baker implored the board to “not mistake age for competency.”

“During my time as a substitute teacher, it has become clear to me that my age was not a barrier at all when it came to providing a safe and educational environment for my students,” Baker said. “Rather, my experiences have shown me all the strengths that a younger substitute can provide.”

Board member Nancy Thrower said restoring the original age requirement for substitute teachers was a sign of good faith from the school board to younger teachers.

“Oftentimes through a crisis situation or an urgent situation, better governance comes from that,” she said. “I shared earlier with the two young folks that were up here that I wasn’t always one of the oldest people in the room–there is value and energy to youth, and having the qualifications is a benefit to our students.”

Part of the board’s discussion related to ways to address the ongoing teacher shortage in Marion County. While speakers noted that younger substitutes are qualified and not just “babysitters’’ for students, the district needs more teachers. Revising the age restrictions would help to fill gaps in teacher employment.

The Florida Department of Education (FLDOE) reported that as of February 2022, there were 4,489 teacher vacancies across the state. The projected number of vacancies by now is expected to be over twice that amount, a staggering 9,079.

Marion schools Public Relations Director Kevin Christian said that as of Aug. 17, there were  154 instructional vacancies across all grade levels in Marion County. The district has the highest need for educators in the certification areas of Exceptional Student Education (ESE) across all grade levels, all elementary level teachers, and math and language arts teachers for middle and high school. Lake Weir Middle School has the largest number of vacancies and needs the most teachers, said Christian.

Across the state, the FLDOE reports that English, ESE, science-general, reading, English for Speakers of Other Languages (ESOL), math and science-physical are “the certification areas where substantial proportions of teachers who are not certified in the appropriate field are being hired to teach such courses.”

Efforts such as the Hometown Hiring Event seek to fill vacancies not only for teachers, but for the hundreds of open jobs across all positions employed by Marion County Public Schools. The event brought in 454 new employees, including 404 full-time hires, 24 part-time hires and 26 new substitute teachers, said Christian.

The resolution, which the board passed unanimously, will stand for a 90-day period during which the board will draft further measures to permanently codify it to amend the required age for substitute teachers to 18 across all grade levels, said Board Attorney Jeremy Powers.