Back to school in Marion County 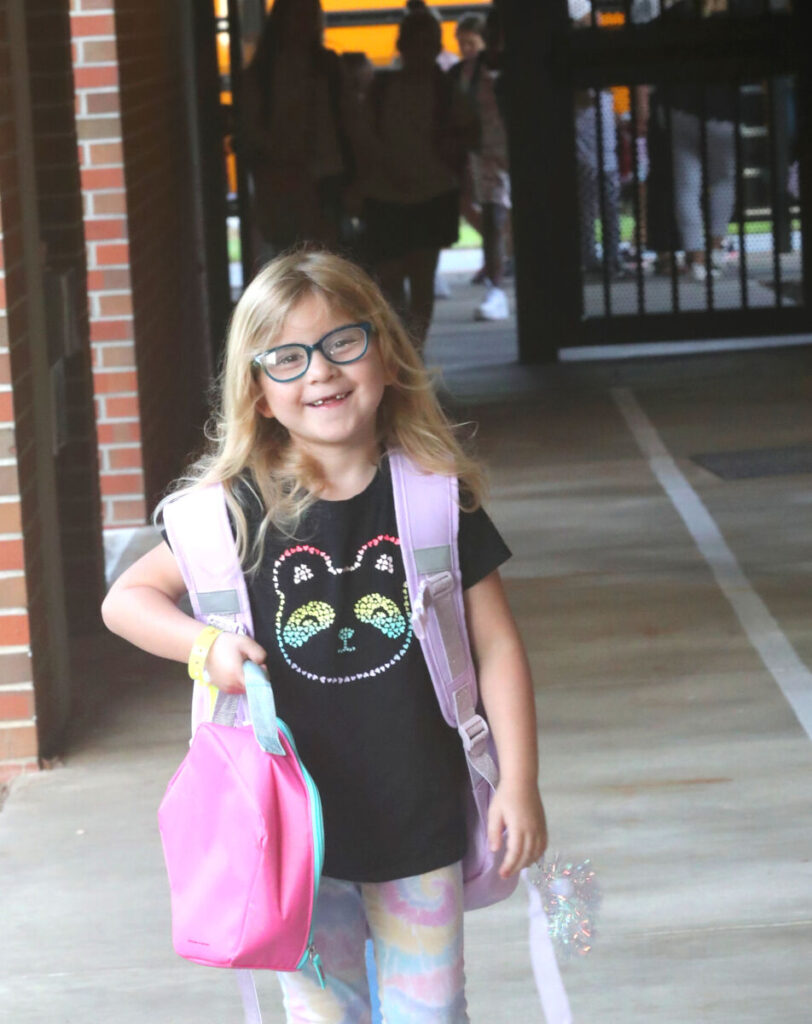 Cora Swanson, 6, walks to her first grade classroom after getting off her bus on the first day of school at Shady Hill Elementary in Ocala, Fla. on Wednesday, August 10, 2022. [Bruce Ackerman/Ocala Gazette] 2022.

The school year beings with a steady start as more students than ever file into classrooms to begin learning after a summer away.

The first day of school saw 39,753 students in attendance, which is 90% of the district’s projected enrollment. Once all kindergarten students were in their classrooms, the attendance rate on Tuesday rose to 41,435 out of the projected total of 43,778 students, according to Marion County Public Schools.

“Our schools have higher numbers than I think we were even anticipating,” said Allison Campbell, vice-chair of the School Board of Marion County. “We’re going to have an increase in students this year over what we had last year.”

Campbell said that besides the noticeable increase in students, one of the biggest differences was being able to see the smiles on students’ faces as they come to school without face masks. She said that she felt that the improvement in the pandemic has contributed to a boost in morale in schools as she saw students flooding into school throughout the week.

“There’s just a level of positivity that’s tangible and you can feel. It feels different than last school year,” Campbell said. “I got to see smiles. Children were hugging and walking in to hug their former teachers. The elementary school kids were so excited and jovial with joy on their faces, and we can see that.”

Campbell said that everything went very smoothly in her opinion, but that it is expected for schools to run into minor obstacles when educating such a large number of students. One obstacle was transportation, said district spokesperson Kevin Christian in a press release.

“Some buses were delayed due to higher-than-expected student counts at bus stops, new drivers on new routes, families unfamiliar with bus stop locations, and drivers placing colored wristbands on younger students to designate them as bus riders during afternoon dismissal,” Christian said.

Delays aside, Christian reported that 95% of the buses showed up either on time or within the first ten minutes of class. The school district uses a mobile app called ‘Here Comes the Bus,” which allows parents and guardians to remotely track the locations of the bus their student is riding.

“Transportation delays are a common and expected occurrence during the first days of school,” Christian said. “Once drivers become aware of students and students learn their bus route numbers, stop times and locations, these concerns dissipate.”

As those involved attempt to work out the challenges described as ‘normal’ during the first week of school, Campbell said that she hopes to see the excitement for learning carry into the classroom throughout the entire school year.

“It’s not just about the first day of school. It’s something that we have to carry with us throughout the entire year,” she said. “As long as that positivity stays at the forefront, and if everyone is doing everything they can to help every student succeed, then we’re going to be on the right trajectory for sure.”