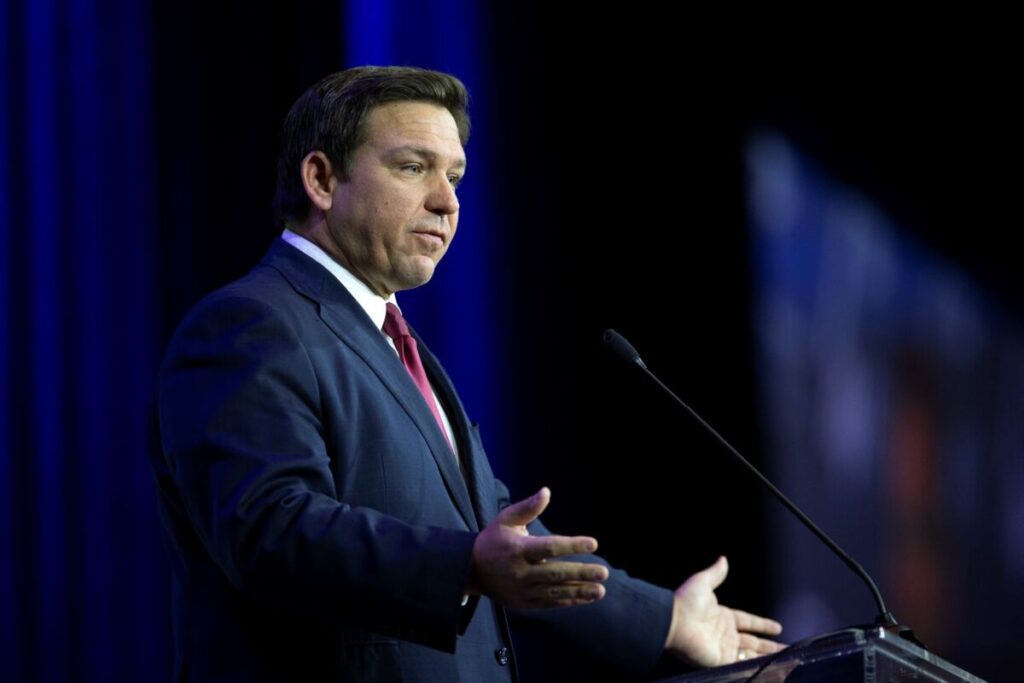 Gov. Ron DeSantis will propose a slate of bills for the 2023 legislative session designed to bolster school districts’ efforts to recruit teachers, after students returned to classes last week amid a scarcity of educators.

During a stop at a New Port Richey high school, DeSantis on Tuesday teased legislation aimed at recruiting to teaching jobs retired law-enforcement officers, emergency-medical technicians, paramedics and firefighters who have bachelor’s degrees.

The proposal, DeSantis said, would make people who have worked in those professions eligible for $4,000 bonuses and would waive fees for the state teacher-certification exam.

“We believe that the folks that have served our communities have an awful lot to offer. And we’ve got people that have served 20 years in law enforcement, they retire, and some of them are looking for the next chapter in their life,” the governor said.

The legislation would build on a similar new program geared toward getting military veterans into teaching roles. The Military Veterans Certification Pathway allows veterans who have not earned bachelor’s degrees but have at least 60 college credits to obtain five-year temporary teaching certificates.

The veterans program launched July 1, and 208 people had applied as of Tuesday, DeSantis’ press secretary, Bryan Griffin, told The News Service of Florida.

“We anticipate even more in the coming weeks,” Griffin said.

The most-recent data on Florida’s teacher shortage was published in February by the state Department of Education, showing nearly 4,500 teacher vacancies in schools across the state.

“As of yesterday, we’re down to 195 (vacancies), which is much better. Not as good as where we were this time last year. But it’s not just a Pasco issue, it’s a statewide issue. As a matter of fact, it’s a national issue,” Browning said.

DeSantis also previewed two other proposed bills, including a teacher apprenticeship program that would allow Floridians who have associate’s degrees to spend two years learning under “experienced” teacher mentors with the goal of the apprentices going on to obtain their bachelor’s degrees.

Teacher mentors who participate would get $4,000 bonuses, according to DeSantis.

“I think what makes a teacher great is actually being there, doing it, watching experienced teachers and seeing what they do that works. Working directly with students,” the governor said.

Another proposal would launch a scholarship program to help high-school teachers earn master’s degrees. DeSantis said that would allow those teachers to teach dual-enrollment courses at high schools where they work.

“Right now, dual-enrollment is one of the more popular ways for students to gain college credit during high school and save themselves money and time for getting their either two- or four-year degree,” the governor said.

State Education Commissioner Manny Diaz, Jr. touted the military veterans program and the bills proposed by DeSantis, calling them a “systematic way to increase the pool of teachers” in Florida.

Diaz said people who have worked in the various jobs have traits such as “discipline” and “commitment” that would translate to the teaching profession.

“You’re looking at these professionals who have given their life to public service. And oftentimes they retire at an early age where they still have the incentive and the time to work. And what better place to have them than in front of our young people in a classroom,” Diaz said.

“Let me be clear: We should not be lowering the bar for teachers in Florida,” Fried said. “Instead of paying teachers what they’re worth and agreeing to stop politicizing their jobs, DeSantis is trying to let Floridians with no experience and minimal training teach our kids.”

“In order to recruit and retain teachers into the profession, the two most important elements are respect and pay,” Spar said. “Under Gov. DeSantis, teachers hear their profession demeaned on a regular basis and face an experience tax that has teachers with 10 or more years of experience earning the same pay as a first-year teacher.”

The 2023 regular legislative session is scheduled to start on March 7.