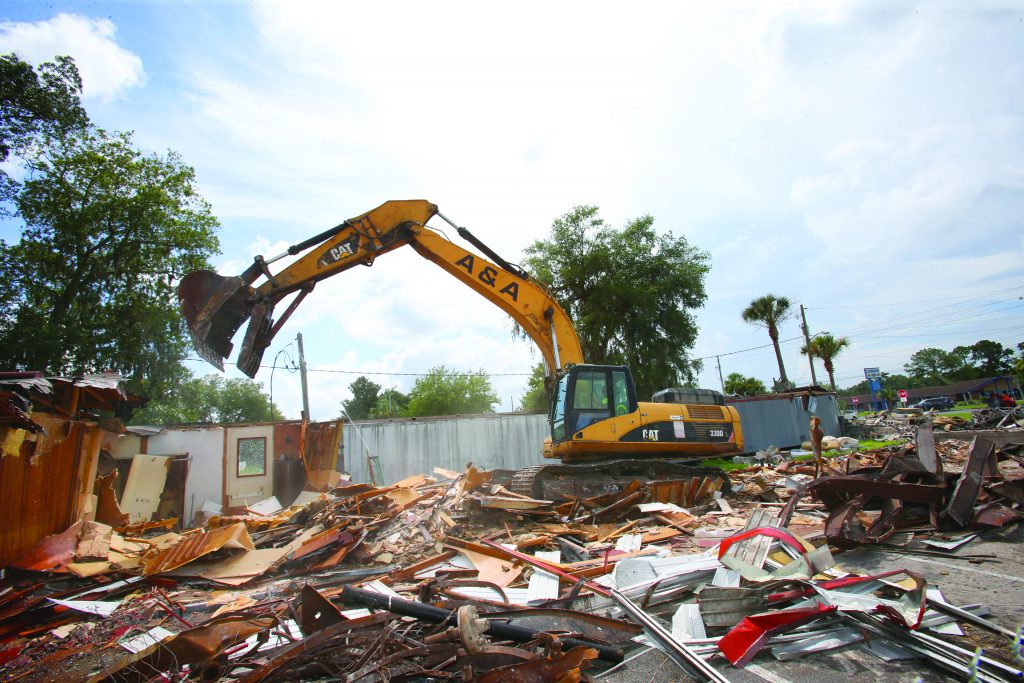 Saving Mercy bills itself as “help and hope” for Ocala’s homeless.

Of course, the local homeless could use plenty of both.

And in recent days the nonprofit, born as a ministry of Blessed Trinity Catholic Church, made a significant move to bring its mission statement to life, especially for those who struggle with chronic homelessness.

Saving Mercy recently began demolishing part of the former Motor Inns and RV Park at Interstate 75 and State Road 40, which it acquired in May 2018 for $2.3 million, as its next step in creating the Mercy Inn and RV Park.

Based on its current plans, which are still under review by city officials, the new facility will feature 35 “tiny house” duplexes as well as about a dozen family units and five small apartment buildings.

Steve Farrell, Saving Mercy’s first vice president and currently a board member, said “financial constraints” will limit the initial thrust of the project.

Still, the group expects to start by building 22 duplex units, an administration building, which is the immediate priority of the next phase, and a laundry facility.

“The city needs this for very obvious reasons,” Farrell said. “All you have to do is drive downtown. We absolutely need it.”

The Rev. Pat Sheedy, pastor of Blessed Trinity, has long championed efforts to aid Ocala’s homeless. Saving Mercy, in time, should have an impact on a major part of this protracted problem, he said.

“We as a community never lost sight of the need to help the chronic homeless. We always like feeding people, or helping people, but that’s just passing Band-aids,” said Sheedy.

“This is the first time that we can help the chronic homeless get back to a normal life. We have strong leadership on the board that wants to give the down and out a chance to get back to normal life. And I think the community will see it as a great benefit for humanity.”

Ocala’s business community, he added, should see it as beneficial as well, in helping address a long-term concern of downtown merchants. 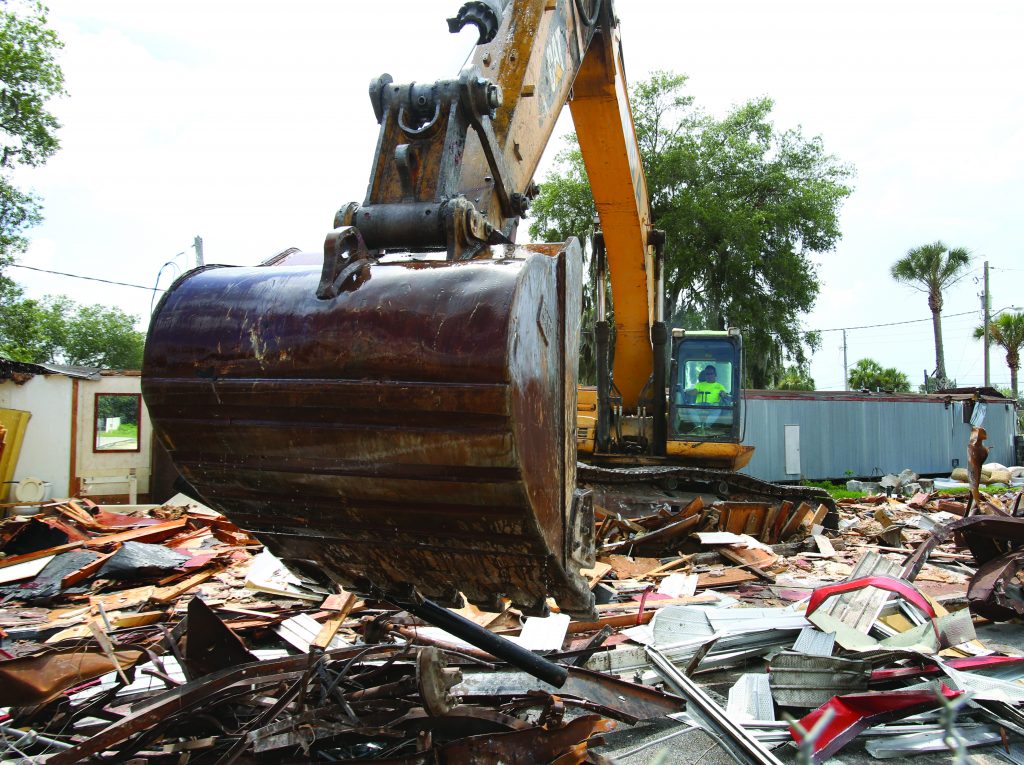 Farrell said the group has adopted the “Housing First” model for the Mercy Inn.

Housing First, as the name implies, prioritizes the most obvious need: putting homeless folks, including families, under a secure roof that is individual to them, and not a group setting.

Typically with Housing First, all comers are welcome, and without requirements, except for signing a lease. Only designated sexual predators are forbidden.

Once situated, clients are assigned case workers and services are made available. Those include things like mental health or substance abuse treatment or counseling, like skills classes, assistance obtaining employment, spiritual guidance and planning for a long-term solution to the person’s housing issue.

Farrell said he personally likes Housing First because of its success rate.

According to the National Coalition to End Homelessness, Housing First operates two basic models: “permanent supportive housing,” which deals with people who have experienced repeated or long-term homelessness, and “rapid re-housing,” which is short-term rental assistance and services.

The coalition reports that studies show the permanent-supportive model boasts a “long-term housing retention rate” approaching 98 percent. As for rapid re-housing, studies say people “exit” homelessness relatively quickly, and 75 percent to 91 percent of them are still in a home a year later.

Downtown business owners should be among those who most want Saving Mercy to succeed, Farrell said, because they are most affected by the homeless problem plaguing the heart of the city.

Saving Mercy has needed to continue operating the motel to have a revenue stream. But some lucrative real estate deals also have enabled the group to make quick work of its debt.

Public records show the nonprofit sold a portion of its land last August to KFC Ocala LLC for $507,500. Farrell said the shovels should go in the ground soon to begin building a new KFC restaurant at the front of the site.

Meanwhile, Farrell said the group has another parcel under contract for $400,000 with a company to build a “dollar-type” store there. That project is wending through the permitting and zoning process.

By December, he added, the group should have just $300,000 left to pay on the property.

Meanwhile, Saving Mercy’s own zoning change is tentatively scheduled to go before the city’s Planning and Zoning Commission on Aug. 10. If approved, two hearings before the City Council are set for September.

Jim Hilty, now a Saving Mercy board member, was an Ocala city councilman when the group launched. He was one of its first contacts as plans developed.

Hilty recalled that at the time Rev. Sheedy and other advocates were working with the city to establish a daytime pavilion in town to serve the homeless. The City Council later rejected the plan after Hilty left the council. 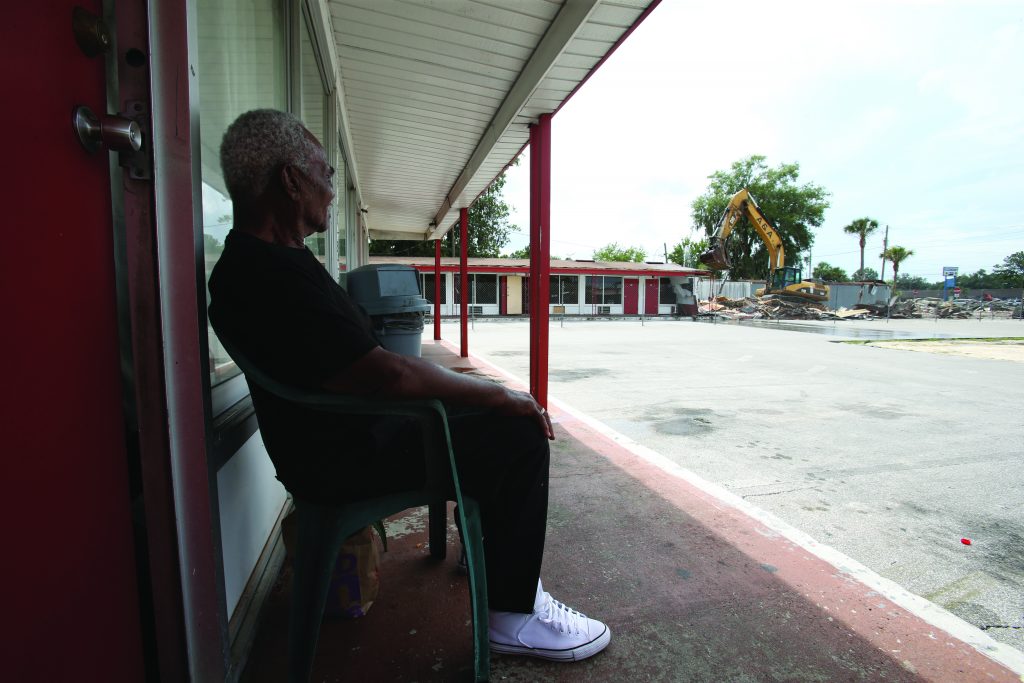 Lawrence Dixon, a resident of Saving Mercy, watches from outside of his room as Tommy Amodeo of A&A The Art of Destruction demolishes the front building at Saving Mercy on West Silver Springs Boulevard in Ocala, Fla. on Friday, July 10, 2020. The building is being demolished to make room for a restaurant. [Bruce Ackerman/Ocala Gazette] 2020.

Torpedoing the pavilion plan only exacerbated the downtown homeless issue, Hilty maintained, but Saving Mercy, once established, could fill the void left by its defeat.

“Obviously, there’s always a need for permanent housing somewhere. But the need is to get them counseling first, and that’s severely lacking all over the place. We had to do something to give them a place to gather away from the parking lots, and give them some ability to have some counseling,” Hilty said.

“We’re doing a good service to the community. We realize we can only be part of the solution. But we’re ready to roll, except for not having the money,” he added. “Eventually, if we can continue at a good pace, it’s going to be a housing development, with multiple counselors working with the people to try and move them to some sort of permanent housing somewhere.”

Being only part of the solution means others must help, said Farrell.

“Usually when people see stuff coming out of the ground, and they see positive things happening, I think people are passionate enough to say, ‘Wow, these people are really doing the right thing,’ and jump on board,” said Farrell.

“My hope is that we get the rest of the county and city on board with this. For us to be successful, we have to have everybody in Marion County jump on board,” he added.