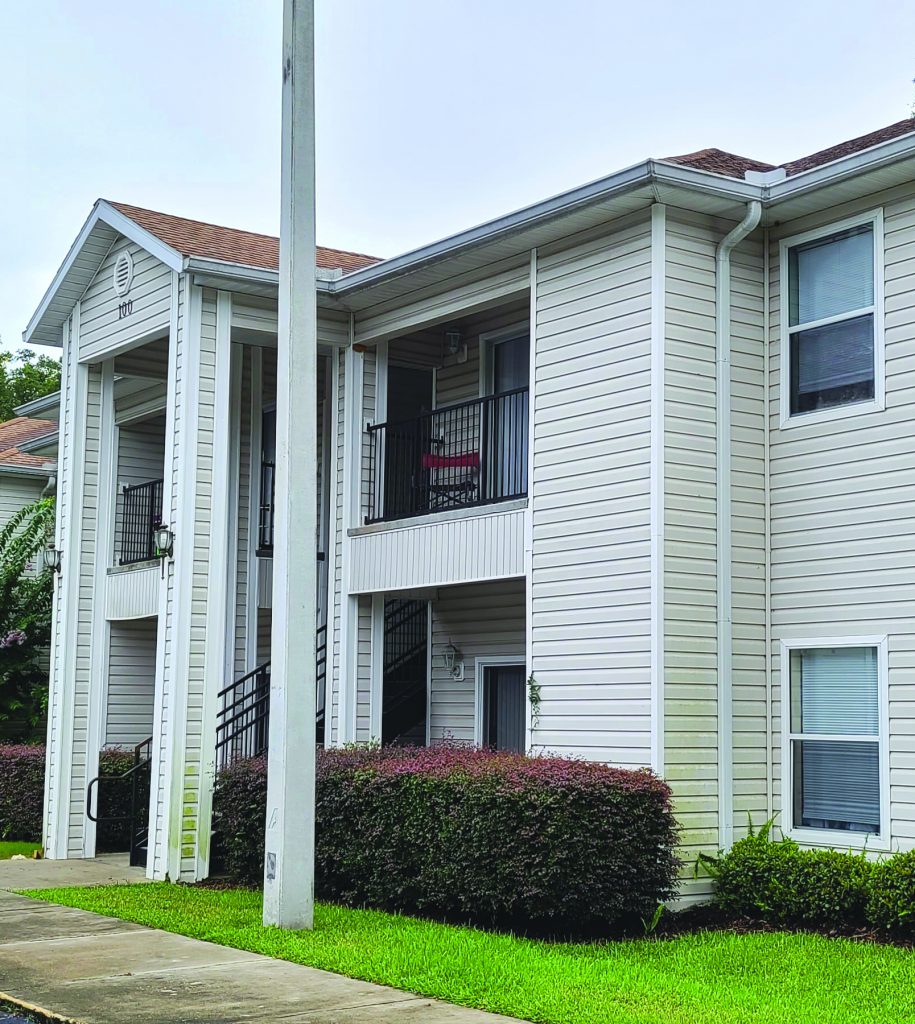 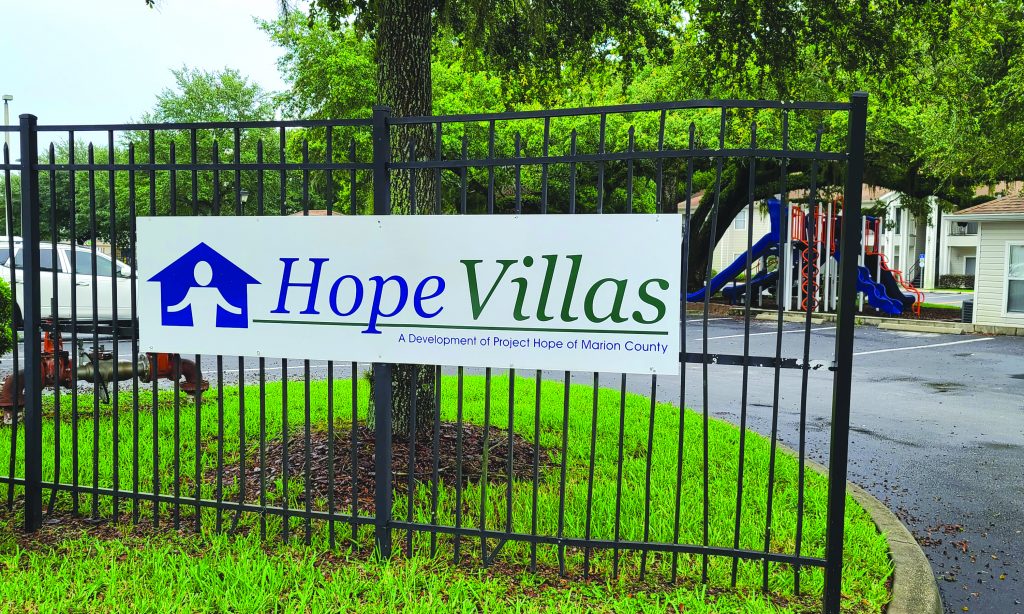 Hope Villas, a development of Project Hope of Marion County, is shown on Northeast 28th Street in Ocala, Fla.

Kya was out of options.

Two years ago, the mother of three boys under age 10, including an infant, was fleeing a relationship with her sons’ father that she describes as “very abusive.” She had lost her job and her apartment and was forced to move in with her mother for eight months. That, however, couldn’t last. Her mom lived in a 55-plus community that forbade children as permanent residents.

Although Kya – the Gazette is using only her first name – did secure a new job, she still didn’t have a way to get there on her own, nor any prospects for a lasting home.

“I had nothing,” she recalled.

Eventually, she said, an internet search led her to Project Hope, an Ocala nonprofit started in 2007 to aid homeless women and children.

After waiting several months, Kya and her boys moved into a new apartment at Hope Villas, Project Hope’s 40-unit housing community in northeast Ocala, in March 2019.

Over the next year Kya put her life back on firmer footing.

And her story is like some 200 other broken and troubled families that Project Hope has worked to restore over the past decade.

Now, the charity is poised to expand its services to their broadest point since its founding.

According to Executive Director April McDonald, 14 of Hope Villas 39 available units – one is used for the administrative headquarters – house current clients. Five more are being refurbished to help a handful of the 40 women now on Project Hope’s waiting list.

By the end of 2020, McDonald said, five additional units will open as existing tenants leave.

The remaining 15 apartments will continue to be rented by people from the community for the foreseeable future, McDonald said. In time, though, the goal is to devote the entire campus to aiding women and kids seeking a new lease on life.

Hope Villas is not an emergency shelter. Instead it specifically gives women with children breathing space for up to a year to rebound from some traumatic situation where homelessness was a strong possibility.

During that time, they meet weekly with a case manager and take classes on managing a home — financial planning, parenting, cooking, housekeeping. Yet they also are taught how to manage themselves, with instruction on communication, taking responsibility, being accountable, showing gratitude and even performing community service, by periodically cleaning the grounds around Hope Villas.

The clients pay “program fees” to live there. The amount begins at $180 a month and moves along a sliding scale commensurate with their income. By month 11, though, they are expected to be paying market rate, about $720 a month.

“Sometimes these women come here with everything they own and their children in their car,” said McDonald, who has led Project Hope since April 2019.

“They can come in here and have done everything wrong, and we can help right it. Being a victim shouldn’t equate to living under a bridge.”

“It has come a long way, and really keeps a population of people from being homeless,” said Bryant.

“They put them in a two-bedroom, two-bath fully furnished apartment. Who does that?” Bryant said. “They’ve had quite a few success stories

“How wonderful that our community has a place like that.”

Dawn Westgate, executive director of the Kimberly’s Center for Child Protection in Ocala, agreed that Project Hope is a vital community asset.

“At Kimberly’s Center we see how families can struggle after allegations of child abuse and domestic violence. Project Hope’s mission to step in and provide housing and support services makes it possible for moms and kids to focus on the hard work of healing and self-sufficiency beyond their abuse,” Westgate said.

“We are blessed to have them in our community.”

McDonald said shelter and guidance are only parts of the equation. The third pivotal part of the effort to aid families is prayer.

The women attend weekly prayer sessions that include staff and often former clients to reinforce that something bigger than themselves is at work in their lives.

“When I drove on this property, I felt the protection of the Holy Spirit, like God telling me, ‘You’re home,’” McDonald said. “We’re teaching them that prayer and your walk with the Lord are not a cliché.”

Hope Villas, a development of Project Hope of Marion County, is shown on Northeast 28th Street in Ocala, Fla.

Kya said that was a very important aspect of her involvement with Project Hope.

“It gives you that sense that ‘I’m important too’ and that there’s a reason for everything and that somebody in this world cares about me. And it gives you a strong sense of community, especially when you’re building faith and having faith in yourself that you can do this.”

“I was in a very abusive relationship, to the point that I had nothing left,” she added. “I was at a point in my life where sometimes I considered I didn’t want to go on. I didn’t grow up very religious, but it (Project Hope) gave a sense that good things will happen to me as a result of having a stronger faith.”

After being approved by Project Hope’s review board, each new client is welcomed into an apartment outfitted with new furniture and appliances, all donated by local supporters, that they can take with them, the foundation of a new start.

“We’re teaching them to be self-sufficient,” McDonald said. “They leave here with more in their heart and their truck.”

Being faith-based, Project Hope is ineligible for state or federal grants. And so it relies on the rent from the remaining non-client tenants as well as the generosity of contributors, individual and corporate, and an annual fundraiser, which this year, as it was in 2019, will be a clay-shooting event in Sumter County.

But the charity was given fiscal room to maneuver by paying off its $1.5 million mortgage in December 2018.

McDonald acknowledges that not every case is a success. “Some do self-sabotage,” she said. Yet she thinks that many more have been helped – like the former client who had lived in more than 50 foster homes as a child – to find their place in life.

That goes for Project Hope itself. “We’re exactly where God wants us to be, on track with our strategic plan,” she said.

Kya got there, noting she was able to save up and have “substantial” savings when she and her boys ventured out on their own after she moved out of the program in May.

“The biggest benefit to me was having that sense of security,” she said. “As a single mom, it was just me, and so it was a sense that no one is going to let me fall from this. That protective bubble, that’s what they really give you, and especially as a single parent, you just need that ‘Here, I’m gonna catch you and I’m gonna hold you until you can stand up by yourself.’”

“They’re giving you that cradle,” she added, “but they’re also challenging you.”

And were it not for Project Hope, Kya, who works as a dispatcher for a logistics company, thinks she would still be in that same abusive situation.

“It was that breather that I needed to try to just pause my life for a little bit and have that safe community and have that reassurance that you’re going to be OK and get to the next level,” she said.