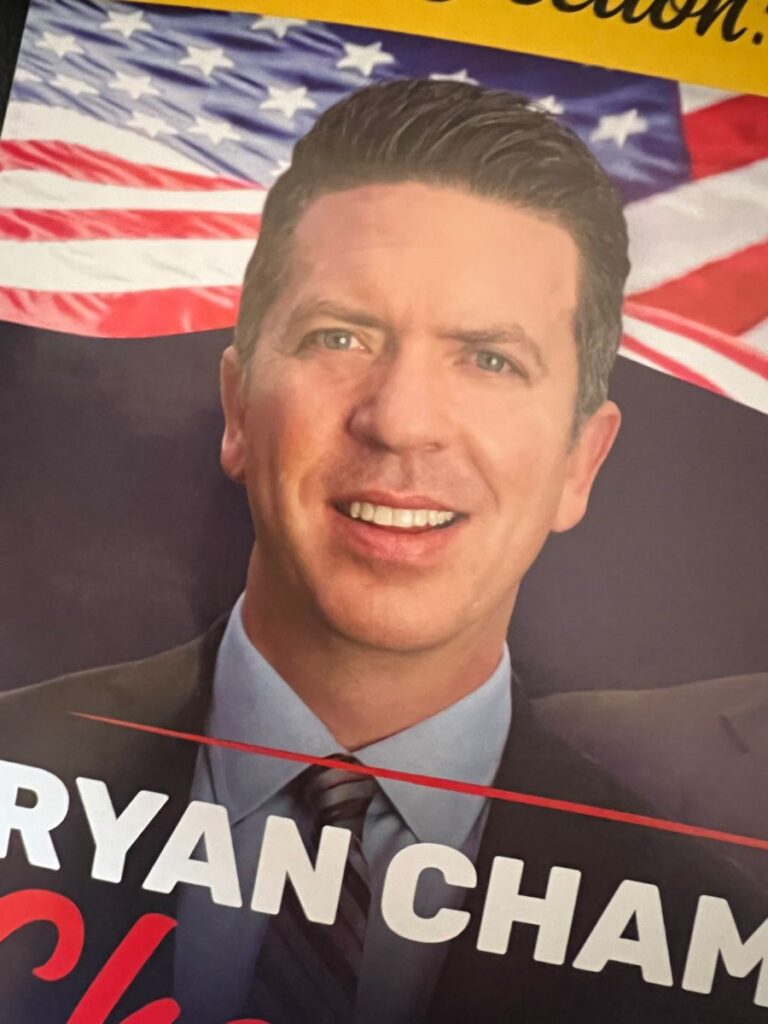 Marion County Republican voters will head to the polls on March 7 for a special election to fill the recently vacated Florida State House District 24 seat. There are five GOP candidates in the race and because a sixth registered Republican is running as a write-in candidate and there are no Democrats in the race, the election is closed to non-Republican voters.

Of the six hopefuls, Chamberlin stands out because of questions raised by his financial disclosures, campaign claims and business background, which includes numerous companies on paper that closed within a year and extensive experience in multilevel marketing businesses.

This is Chamberlin’s second political campaign. He ran for Congress in 2020 and lost in the Republican primary to Kat Cammack, who went on to win the House District 3 seat. In that race, Chamberlin raised approximately $130,000 and garnered the endorsements of prominent Republicans State Sen. Dennis Baxley, Marion County Tax Collector George Albright, and former Marion County Commissioner Mike Amsden.

The District 24 House seat became open when Ocala Republican Joe Harding resigned on Dec. 8 after being indicted by a federal grand jury on several counts of fraud based on illegally obtaining pandemic-related loans. Chamberlin told the Gazette he jumped into the race immediately because he had been waiting for an opening.

In the first campaign flyer mailed to voters, Chamberlin said that as “CEO of True Patriot Network, Ryan fought back against Woke Big Tech Corporations to deliver a social media option for conservatives.”

The flyer also claims that in 2022, Chamberlin “and his organization helped raise money to support conservatives and organizations including DeSantis, (Kentucky Sen.) Rand Paul, Herschel Walker, (who lost a recent Senate runoff race in Georgia,) and the Heritage Foundation.”

As part of its election coverage, the Gazette examined the mailer’s claims then sat down with  Chamberlin to discuss those claims as well as his business and financial history.

According to corporate records, True Patriot Network, Inc. was filed as a corporation in Texas in January 2021. Chamberlin told the Gazette the social media platform launched the same year.

The only director’s name on the initial filing is Terry LaCore, an entrepreneur in Texas in the business of B:hip. This multilevel marketing (MLM) company sells energy and health products. Chamberlin said  LaCore is the majority shareholder, and Chamberlin is the main operator of the True Patriot Network.

TPN does not have any employees. Chamberlin explained the network relies instead on a host of independent contracting resources, many of which come from LaCore’s other businesses.

A check of public records found no evidence that TPN is operated at the location on file with the state. The tax collector for that address in Texas has no record of the True Patriot Network paying any business property taxes.

Asked about how the TPN social media platform and newsletter generates income, Chamberlin’s short answer was through advertising revenue. The Gazette did not run across any sponsored ads when it navigated the platform over a ten-day period.

By May of 2022, sixteen months after the company started, Chamberlin shares  the quick success of the True Patriot Network in a book called “Think Big!,” a motivational book series that discusses the path to success.

There was very little social activity in the “news feed,” but we did come across videos in which Chamberlin was shown teaching a group of people about multilevel marketing businesses. In a video posted last month, Chamberlin is shown encouraging people to be patient with their progress in building their MLM business.

When asked if there is an MLM aspect to the True Patriot Network, Chamberlin said no. He said the video on the site was an example of him being hired to do sales training for another MLM business.

In an interview with The Network Marketing Magazine, which seems to be at least 10 years old, Chamberlin explained how he first got started in the MLM business model by joining Team National in October of 1999, at age 25.

Team National was a company that encouraged people to sell “memberships” so that they would have the benefit of discounts when buying merchandise. As with other MLM business models, participants enlisted other people to sell memberships in order to build multiple commission layers.

Around 2011, Chamberlin and his wife, Jennifer, became “ambassadors” for another MLM business, Evolve, that sold nutritional health products. In one recorded session from 2016, Jennifer Chamberlin encourages people to “reboot” at their convention for the company so that they could get to the “diamond” level of the MLM business. She also shared her hope that through a multilevel marketing business she’d be able to fulfill her dream of opening an orphanage one day.

Asked about the perception among some that MLM businesses are not trustworthy, Chamberlin responded, “There are good ones and bad ones. I worked for good ones.”

As for his campaign claim of being a “consultant helping thousands of entrepreneurs and CEOs,” it seems like the bulk of Chamberlin’s consulting working is primarily related to helping people build MLM businesses.

Chamberlin clarified a perception in his campaign mailer implying the True Patriot Network gave donations to DeSantis’ re-election campaign last year. The Gazette could not find any record of a donation. In a text message, he said, “I have never claimed that the True Patriot Network has cut checks to any organization. We did, however, spend this past year engaging in fundraising activities for several organizations.”

Chamberlin said conservative politicians paid TPN to connect them with potential voters and donors. The fee structure for that service varied, but Chamberlin said the “bulk of” the donations went to the candidates.

In Chamberlin’s financial disclosures, he estimates his ownership value in the 2-year-old True Patriot Network is $500,000 and indicates he receives $312,000 annually from it.

In addition, he claims $50,000 in annual income from “consulting” from “NYK.Academy.” There is no business entity known as NYK.Academy filed with the State of Florida; however, it appears to be a reference to Chamberlin’s book “Now You Know,” which he self-published in 2010 under the fictitious name of Platinum Publishing.

Chamberlin has had a real estate agent’s license with the State of Florida since 2019. He told the Gazette that he only obtained the license for personal investment purposes. In his financial disclosure, he valued his 10-acre home in Belleview at $1.2 million. According to property records, he purchased the home in May 2001 for $108,500. He discloses a mortgage of $254,751 and a revolving line of credit at $141,589 on the house.

Besides the self-published “Now You Know” book, in 2011 Chamberlin created an audiobook, “Laws of Prospecting: How I made over $1 million using only 3 Basic Prospecting Laws.”

All of the books were similarly self-funded through companies that assist writers in getting published as long as they self-fund the book. In turn, the writers have “total creative and editorial control over their book.”

Chamberlin told the Gazette he continues to use the books as training material for his consulting work and continues to receive “royalties” for the books.

Chamberlin has had many other business ventures.

In March 1997, he filed King’s Chamberlin Ministries, Inc., which was dissolved in September 2001 for failure to file an annual report. He didn’t recall the business but thought it was related to his brother who lives in Israel.

In October 1997, he filed Ryan Marketing Group, Inc., which was administratively dissolved for failure to file an annual report in September 1999.

In February of 1998, he filed a corporation called Professional Credit Services Acceptance Corporation, Inc. that was administratively dissolved for failure to file an annual report in September 1999.

In January 1999, he filed Freedom Investments, Inc. that was dissolved in October 2002 for failure to file an annual report.

In September 1999, he filed Freedom Team, Inc. which was administratively dissolved in September 2011. Chamberlin said that was the corporate name he used while he worked with Team National. He indicated this venture was his first business success.

In May 2010, he started a company called Prosperity Team Leaders, LLC, which was dissolved in September 2011 for failure to file an annual report. Chamberlin had no recollection of what that corporate entity.

In January 2010, he started RJ Chamberlin, LLC, which he said he continues to operate for the consulting/training work he does for companies.

In April 2011, he started a company called Empowered Companies, LLC, which was dissolved in September 2012 for failure to file an annual report.

Chamberlin has also dabbled in motivational content for children. In March 2013, he was on the board of EJ Kids, Inc. in Hollywood, Florida. That company administratively dissolved the following year for failure to file an annual report. In February 2015, there was The Kids Movement, Inc., also created in Hollywood. That company was voluntarily dissolved in March 2019. For both, Chamberlin said he was a board member – not an owner.

Chamberlin also has filed several fictitious business names in addition to Platinum Publishing in 2010. There was NYK Press in 2013, and Prizmatic Studios in August 2022.

Chamberlin moved to Ocala at 10 years of age and has stayed local. He primarily attended local Christian schools and attended the College of Central Florida from May 1992 through August 1996, where he received an associate in arts degree.

Chamberlin and Jennifer were married in 1994, at age 20. They have four grown children, all of whom were homeschooled by Jennifer Chamberlin in partnership with Souls Harbor Christian Academy.

Their marriage certificate indicates their marriage was performed by Pastor James Varnum of the First Pentecostal Church of Belleview. The family has remained active with the church over the years. In May 2001, the pastor and church signed a Quit Claim deed to the couple’s property. Chamberlin said his family has no financial relationship with the church.

Varnum, however, has provided significant financial support for Chamberlin’s political efforts. He and his wife contributed thousands to Chamberlin’s congressional campaign.

In a campaign video Chamberlin posted, Varnum is shown pulling a card from his wallet with Ryan Chamberlin’s name on it. The card then bursts into flames while the pastor says that only Chamberlin’s campaign is on fire.

The Gazette asked Chamberlin if he felt it was appropriate to mix religion and politics.

“One of the first things that happened when they founded this country was they established a church,’’ he said. “Now, are there things that can be done incorrectly? Probably so. But for a pastor of someone that they’ve known for 36 years says I would like to endorse somebody in my church…do I think there is a problem with that? No. I would hope every pastor would do that, if they really believed in the person.’’