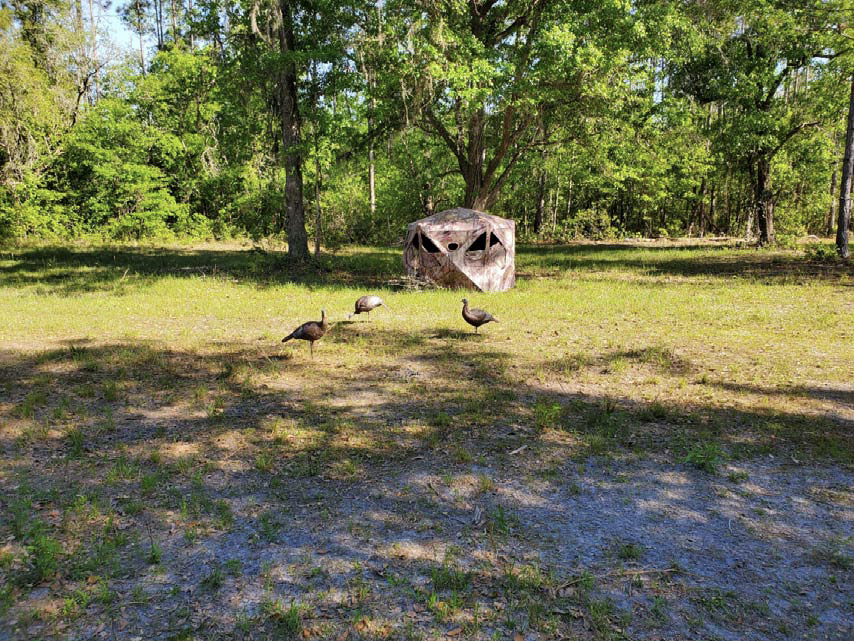 Sheriff Billy Woods and his wife were caught hunting turkey over bait while in a ground blind in rural Madison County on Good Friday, April 2, 2021, according to a report filed that day by Florida Fish and Wildlife Conservation Commission (FWC) officer Randy McDonald.

“At this time, I identified myself and asked the hunters to exit the ground blind,” McDonald continued. “Once out of the ground blind I advised the hunter, later identified from a Florida hunting license as William Woods that I was hear (sic) because I believed they were hunting turkey within 100 yards of bait.”

Pictures included with the report show three turkey decoys directly in front of the blind and cracked corn scattered on the ground nearby. There were no other hunters present.

Woods was cited for violation of a state law, “restricting methods of taking wildlife,” a second-degree misdemeanor, according to the report. He also received a ticket for violating Florida Administrative Code 68A-12.002, which states, “wild turkey may not be taken if the hunter is less than 100 yards from a game feeding station when feed is present.”

Second-degree misdemeanors are punishable by up to 60 days in jail and up to a $500 fine, if convicted. Woods was issued a mail-in fine of $300, allowed by Madison County, and he was not required to appear in court. Court records show Woods paid the fine April 8, 2021.

The twice-elected sheriff, (2016, 2020) known for his hard stance on crime and disdain for lawbreaking individuals, has never disclosed the nearly two-year-old hunting violation to his constituents.

After the Gazette contacted sheriff’s office attorney Timothy McCourt asking about the incident, Woods on Wednesday issued a written statement through his office that reads in part:

“A couple of years ago, I was with my wife on a hunting trip in North Florida. I was attempting to call up turkeys for her to hunt when we were approached by a Florida Fish and Wildlife officer,” the statement reads. “He explained to us that we were too close to a nearby feeder to hunt there. Realizing that I was in the wrong, I expected that officer to do his job, which he did.”

The report did not contain any photos of a feeding station, only corn on the ground. 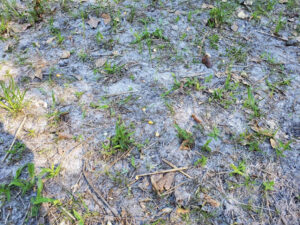 Photo of corn scattered on the ground taken by the FWC officer who cited Sheriff Woods for a second degree misdemeanor. There were no photos of a “feeder” referenced by the sheriff.

Woods’s wife was given a written warning for the same violation. The report only mentions her in the last line and does not include a reference to Woods’ position.

However, before Woods was ticketed, McDonald called in to his superiors for direction on how to handle the situation, with the call eventually making its way all the way up to the head of the FWC, according to a body camera video taken by McDonald, which was obtained by the Gazette.    The 30-minute-plus-long video captured most, but not all, of the incident, with roughly 51 minutes missing.

In the video, after taking the written warning from McDonald, Woods’ wife then asks him: “So you’re doing something different with… (inaudible).”

“I feel like it is probably gonna be the same route, but I don’t know that for sure,” said McDonald. “When we deal with someone like a sheriff, we have to go through a chain of command.”

McDonald’s body camera video doesn’t begin until nearly an hour after the incident first began at 4:30 p.m. when he exited his vehicle a second time at 5:21 p.m., apparently following the call to his superior officer regarding Woods.

FWC’s rules on the use of body cameras states, “At the beginning of the member’s shift, the body camera shall be turned on,” but also states, “members shall start recording with the body camera as soon as practical during a given situation.”

The Gazette attempted to reach McDonald to ask why 51 minutes elapsed before he began recording his encounter with the Woodses but was told he was on leave until Feb. 8.

The incident began with McDonald on routine patrol along Southwest Lake Hike Road after he observed a vehicle parked inside a gate at a location that he had previously walked and had located a camouflaged hunting ground blind and cracked corn commonly used to attract turkey, according to the summary report.

After parking his patrol vehicle and entering the property on foot, McDonald wrote he was able to approach the ground blind in the wood line unseen and observed the three turkey decoys just in front of the ground blind.

After hearing the turkey call and identifying himself and then advising the Woodses he believed they were hunting turkey over bait, McDonald said the sheriff stated the “bait should be gone.”

McDonald wrote he walked a short distance and located a “substantial amount of corn still present,” and explained to Woods that he had to be 100 yards away from and (sic) type of bait.

Woods, according to McDonald, said, “I do know that.”

After McDonald’s body camera is finally recording well into the encounter, it shows him approaching Woods and his wife standing outside a Ford Super Duty pick-up truck some distance away from the gate.

“I got a call in to my captain, you know Jay Russell don’t ya, major Russell,” said McDonald. Woods replied, “Yes.”

“Yeah, I got a call in to him, I gotta wait and see what kind of direction we gotta go,” said the wildlife officer. Woods then asks McDonald, “What is it?”

“Well, it is a misdemeanor, so,” said McDonald, who then motioned toward Woods’s wife. “I did write her a warning, OK, so just a warning.” Woods can be seen flashing a smile before turning away from the camera.

Seconds later, Woods’s wife asks McDonald the question about “doing something different,” with McDonald replying, “We have to go through a chain of command.”

“Sorry to put you in that spot,” said the sheriff.

At 5:44 p.m., McDonald receives a phone call from a superior, presumably Russell, who tells McDonald to walk away and then a few seconds later asks him if he can talk freely, to which McDonald replies, “Yes.”

“Alright, this went all the way up to director Sutton,” said the man to McDonald, referring to FWC Executive Director Eric Sutton. “We have the green light to do whatever we normally do, and you’ve got our full support 100%.”

The two men then discuss what they normally do under the same situation, with McDonald saying he usually writes the man a ticket and the woman a warning.

“We can give him a mail-in fine, but the message needs to be to him, “Look we understand but we ran this up through our director and we think we need to be consistent as we’d be with the public,” said the man presumed to be Russell.

“This is a second-degree misdemeanor, but we are just giving you a mail-in fine,” the man told McDonald to tell Woods. McDonald then asks the man if Tallahassee, “wants a hard copy,” and the man replies, “Yes.”

A voicemail left on Russell’s phone requesting an interview regarding the incident was not answered and the Gazette Wednesday received an email from FWC public information coordinator, Ashlee Brahier Sklute, saying Russell had forwarded the email but, “We are unable to accommodate your request.”

At 5:47 p.m. on the video, McDonald walks back to Woods and his wife and tells them it went all the way up to “my director, director Sutton.”

“I’m sorry about this,” said McDonald “But this is just, uh, like I said, this is my job.”

Toward the end of the video, the two men are standing in front of McDonald’s truck as he gives Woods the citation and asks for his “John Hancock.”

“I appreciate you being really respectful sheriff, you’re a class act,” said McDonald.

“Oh, no, no, no,” replied Woods, “I put you in a bad spot and I shouldn’t have done it my friend and I appreciate it and I promise ya…’’

McDonald then interrupts Woods, “I hope there’s no hard feelings.”

“Oh, good Lord no, nope, uh not at all,” replied Woods as he begins to walk away. “And the kindness in which you’ve shown me I promise you nobody will ever know except for her (Woods points in the direction of his wife), and it will not go any further.”

McDonald then gets in his truck and tells the sheriff, “Well, it ain’t going no further from me.”

In his statement, Woods notes his status as an avid hunter, outdoorsman and animal lover and further wrote:

“Therefore, my ignorance of the exact distance to a feeder is no excuse and I would not intend on making an excuse…In the end, I am human just like everyone else which means we will all make mistakes,” Woods wrote.